The dramatic decline of the modern man

Our ancestors were stronger and faster than we are. What happened? An expert explains 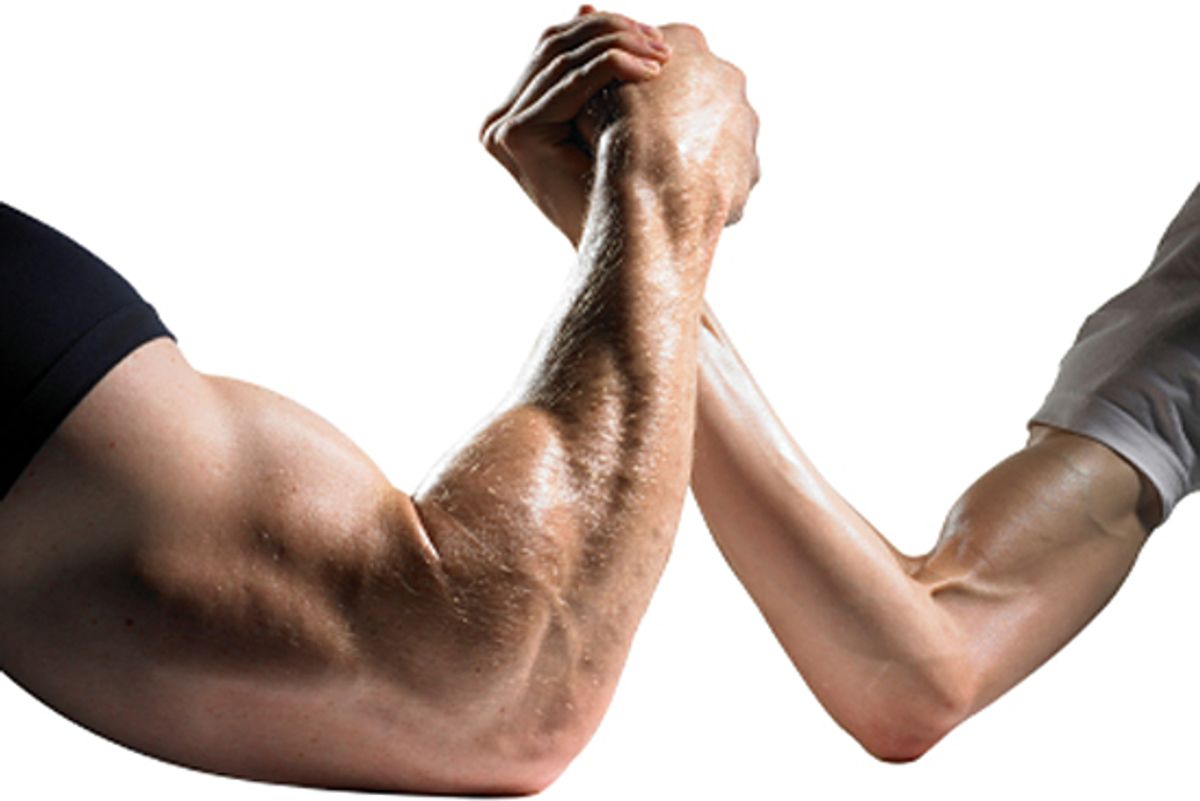 Conservative commentators have been bemoaning the decline of the American man almost as long as the American man has been in existence. As it turns out, they are right: Men these days are a mere shadow of what we once were. We've become physically weaker than our ancestors. We're slower runners. We can't jump as high as we once did. As Peter McAllister, an archaeologist with the University of Western Australia and the author of the new book "Manthropology: The Science of Why the Modern Male Is Not the Man He Used to Be," puts it, we might be the "sorriest cohort of masculine Homo sapiens to ever walk the planet." I, for one, blame guyliner.

"Manthropology," a tongue-in-cheek look at the science of maleness, examines what recent discoveries in the fields of archaeology and anthropology can teach us about the state of modern masculinity. Ice Age aboriginal tribesmen, he discovers, were able to run long distances at approximately the same speed as modern-day Olympic sprinters. Classic Grecian rowers could attain speeds of 7.5 miles an hour, which today's rowers can only attain for short bursts of time. Our culture may be obsessed with muscles: He notes that, since 1982, G.I. Joe's Sgt. Savage has gotten three times more muscular and Barbie's Ken now has a chest circumference attainable by only one in 50 men, but the luxuries of our contemporary lifestyle have caused a steady decline in genuine physical power. The book may be a light, breezy work, but it puts our current debate around masculinity into fascinating context.

Salon spoke with McAllister on the phone from Australia, about the current state of American manhood, hypermuscular toys and whether the recession is bringing back old-school masculinity.

Do you think masculinity is in a state of crisis?

I have a strong feeling that masculinity is in crisis. Men are really searching for a role in modern society; the things we used to do aren't in much demand anymore, and it seems we're having a little trouble finding a way to establish ourselves. I don't know about America, but it's certainly the case in Australia, that men have an ignorant, blithe assumption that they are the best that's ever been. But it's not really supported by the facts at all.

From a physical perspective, certainly, your book argues that men are much weaker than they used to be. How do we know that?

You have to look at a couple of different points in our evolutionary history to explain that. Chimps, our closest ancestors, have muscles that are about four times stronger than ours. They recruit muscle fibers in a very different way; they swing their bodies through branches and they need a lot of power. For some reason our muscle fibers got weaker over time. In the case of the jaw, for example, it may have had something to do with allowing more space in the brain cavity. But I think it's more to do with our move from the forest onto the savannah. We lost the need for those very explosively powerful movements and we began to need two things -- the ability to have endurance, to walk and to run for long distances, but also to have very fine control of muscles for making tools and that sort of thing.

Up until about 20,000 years, Homo sapiens were very, very robust in comparison to what we are these days. It's not that we're so different from those robust Homo sapien males, but our bodies are actually geared up to respond to pressures that we don't get anymore. There's the example of aboriginal runners who, we know from fossilized footprints, could run as fast if not faster than [Olympic sprinter] Usain Bolt. And the reason why is that they did it from a very early age. The Greek trireme rowers could do feats that can't be duplicated by modern rowers. Greece was a very tough country to make a living in. Everybody walked everywhere. The people lived as shepherds, it was a very rough existence. Our bones are about 40 percent less mass than the bones of Homo erectus, but genetically ours are not that different. It's just that we don't get put under that kind of pressure. Arm bones of tennis players, for example, are almost as thick as those of Homo erectus.

There are some interesting statistics there about how hard people could work during the Industrial Revolution -- these rather small, malnourished men were able to wield these incredibly heavy sledgehammers all day, and the same phenomenon still applies to Nepalese hill porters. These little guys of about 55 kilos carry 90 kilo weights for about 75 miles over a period of days. It doesn't seem to have any degenerative effects on them as well.

The New York Times recently argued that, because of the recession, fashion and pop culture are pushing out the twink aesthetic and bringing back the manly man. Do you think that's right?

There's been this movement all through history. The dandies, the macaronis and other feminized males were popular during times of great assurance, when England ruled the waves. That people want those stronger, more masculine figures in times of crisis makes sense to me.

You observe in the book that G.I. Joe and other boy action figures have been getting progressively more muscular. Why do you think that is?

It says something about the substitution of pomp and show for real manliness. There is an inherent male and female attraction to muscularity -- it's an instinctual thing. Big muscles are very, very sexually attractive. There's no doubt about that. Women say that they are not attracted to muscularity for long-term relationships, but they are for short-term relationships. But the ballooning of these action figures shows a lack of substance to me -- instinct warped in a very unfortunate way by the affluent consumerist society.

As you mention in the book, there's also been an increase in steroid use among young men. Do you think that's connected?

In the absence of any real markers of masculinity, we gravitate toward things that create a huge visual sensation of masculinity without the real thing. It's part of the same phenomena, and the obsession with muscularity isn't unjustified. But while there's a real attraction to that kind of physique, those men have been shown to be less trustworthy. As the studies tend to show, muscular men are higher-aggression, low-commitment and they're capable of creating a lot of problems.

You make the very intriguing argument that muscularity and aggression are increasingly being weeded out of the gene pool.

I've cited some studies of children of the Viking Berserkers [a group of notorious Norse warriors known for their aggression], and found that these are hyperviolent men and actually did have more children than comparable warriors in that society. In the past when muscular strength was everything, there was a real likelihood that genes would be spread by that kind of behavior. With the society that we live in now, that kind of self-destructive thing gets people out of the gene pool. Young males that have nothing to lose -- they're hyperaggressive, they get into gang violence, they're liable to die at a very young age. Aggressive men go to prison and they go for longer periods of time, and they commit more offenses that keep them in there, which impedes their ability to have a family life and reproduce. And thanks to the rise of reproductive control, like the pill, when women have liaisons with muscular males, it doesn't have the reproductive consequences that it did. That's good news for the cuckolded husbands of old, because studies show that they're often stuck raising the children that result from women's liaisons with the beefcakes.

You dedicate a part of the book to examining different hazing rituals around the world. I remember being hazed by a sports team when I was in university, and it being a humiliating, completely ridiculous experience. But, weirdly, I do actually remember feeling like I was suddenly a part of the group afterward (even if it was a group of people I didn't particularly like). Why are these kinds of rituals so universal?

Nearly every group I've ever come across does it in some way, and the fact that the civilized, affluent West still does it shows that it's, for want of a better word, a very natural practice. One of the paradoxes is that this very violent, abusive treatment actually serves to greatly heighten the need of the initiate to belong to that group. It strips away their own personal power and individuality, it makes them crave belonging to the group and it makes them bond more tightly to it. I'm not arguing, at all, in favor of hazing. I'm just pointing out that it does seem to have a very strong resonance within the heart of masculinity.

It seems to be a very deep, masculine thing. I think it relates to human societies being so patrilineally based. And incidentally, we could argue that's largely why there's malaise among men these days, because we're naturally so geared to being a part of a band of brothers. It seems to be a very deep, inherent thing. At the moment, I'm in an area of Australia called the Little Sandy Desert, and I'm dealing with Martu aboriginal men. In about a month, they're going to round up all the young men from all the settlements and they're going to take them out to the bush and circumcise their penises. Just a little way over they actually subincise them.

But these rituals, like military hazing, also seem extremely anachronistic. It doesn't seem to make much sense in a society with gender equality, or some semblance of it.

I would disagree slightly. I'm sure that everybody does think that, and of course it's true that it's very counter to the whole civilizing process. But I disagree that it's anachronistic. You're talking about something that is instinctually very deep, otherwise, why do things keep bubbling up like that?

Do you think that professional sports are an outlet for men's instinctual need for violence?

Sport really fascinates me. It is a highly regulated outlet for a vicarious thrill of participation, watching what bodies can do. I have to say, I was completely flabbergasted to read about Canadian ice hockey. We Australians pride ourselves on having some of the most violent sports in the world, but we don't have a sport where it's actually OK to fight. The one predictor of how good attendance at a hockey match is going to be is the likelihood of having a fight there.

With sports in the past the need to participate was very strong. Some of the early European explorers, when they got to places like North America and Australia, witnessed these incredible contests of athletic strength that were really quite violent. People would die and people would get very seriously injured. But it didn't matter who won; who participated, the act of being in the sport, seemed to be the important thing.