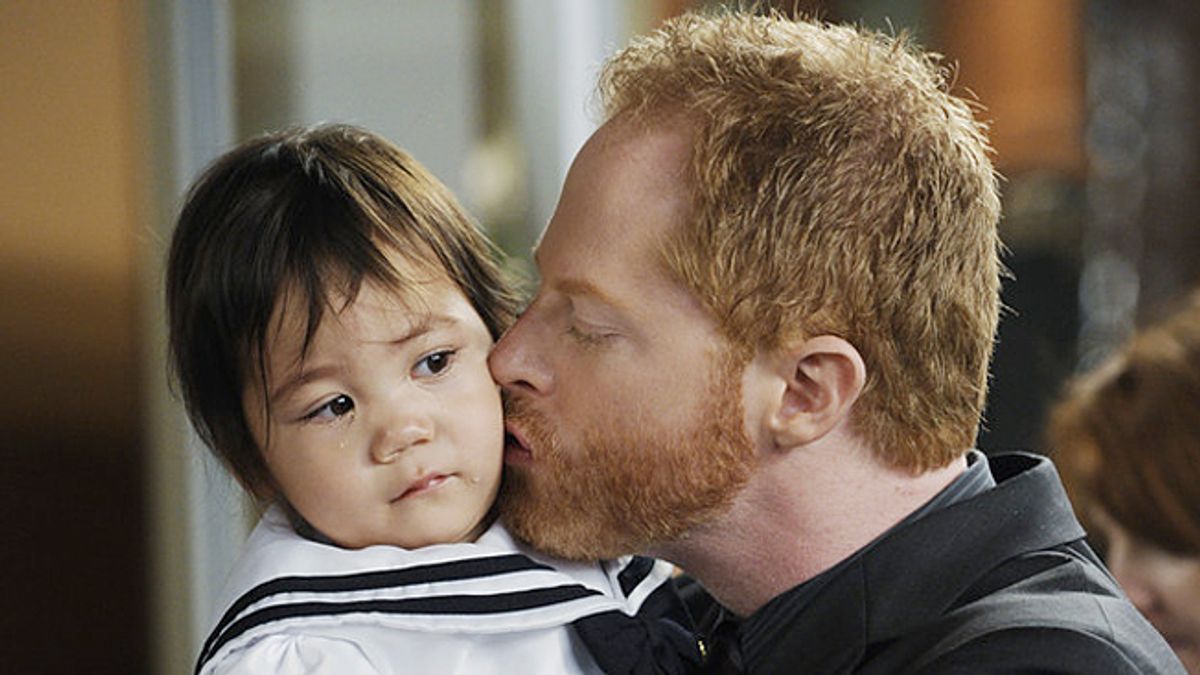 Hey, sitcom writers! You're hurting America -- and not because we're rolling on the floor laughing. You're still writing comedy that's so bad, it's painful. Sure, you thought that you stopped that almost a decade ago, when a huge swath of shows with names like "Two Guys, a Dog and a Jar of Mayonnaise" were swept off the air to make room for bad game shows, bad reality TV, and any other bad idea the network executives could latch onto that might save their lily-white hides from the oncoming digital revolution. Since the golden age of "Seinfeld" and "Friends," fewer and fewer sitcoms have been produced, fewer and fewer sitcom writers are gainfully employed, and the sitcom industry -- if you can really refer to a roomful of insecure narcissists trading barbs while ripping the labels off their Fiji bottles and pasting them to the walls for 12 hours a day as an "industry" -- has been squeezed beyond recognition.

You would think that the remaining sitcoms would be really good, but no. What's truly remarkable is that almost every sitcom in existence is bad in one way or another. Even if there are plenty of decent jokes ("Better With You"), an original (if obnoxious) premise ("Outsourced," "Raising Hope"), a great creator and cast ("Running Wilde"), there are still so many bad moments that they practically erase the good ones, leaving viewers queasy and ambivalent as the credits roll. Even though we can recognize, objectively, that the work of being funny and original is hopelessly difficult, even though we not-so-secretly envy and identify with those insecure narcissists in their writers' room, since we're all insecure narcissists these days and we'd all rather get paid 10 times more to paste Fiji bottle labels to the wall than do actual work, that doesn't change the ugly truth: These new sitcoms that we struggle to rally around each fall are just not that entertaining, let alone that funny.

The comedies that are firing on all pistons these days -- "30 Rock," "Parks and Recreation," "The Office," "Community" -- are working because the writers don't mistake the show's premise for its stories. Watch "Running Wilde" or "Raising Hope" or "Outsourced," and in every single scene you're reminded of the main idea of the whole show. Guy uncertain how to woo girl. Guy uncertain how to raise baby. Guy uncertain how to manage stereotypical foreign peoples. After three or four episodes of this, no matter how witty the writing is, we don't care anymore. There just aren't enough great characters or intriguing situations to keep us hooked.

All of which makes the continued supremacy of ABC's "Modern Family" (9 p.m. Wednesdays) as king of the current sitcom lineup all the more impressive. Against a backdrop of haphazard, unremarkable shows and a handful of reasonably consistent standouts, "Modern Family" demonstrates the enormous comedic possibilities that spring out of simply honoring your characters, and adding new, believable layers to those characters as your show matures. In its second season (which easily stands up to the brilliance of the first), each character on "Modern Family" is idiosyncratic but still real, and show creators Steven Levitan and Christopher Lloyd work hard to find new ways to reveal each character's particular quirks. Take patriarch Jay (Ed O'Neill) and his much younger Colombian wife, Gloria (Sofia Vergara). Instead of dwelling on their most obvious traits -- her hotness and their age difference -- the writers locate the cultural disconnect between Jay and Gloria and exploit it brilliantly. In a recent episode, when the neighbor's constantly barking dog disappears, Jay becomes suspicious that Gloria might have done something brutal to the animal.

Jay: (to camera) Gloria's grandfathers and uncles were butchers, so she's always had a certain comfort level when it comes to ... killing. One time we had this rat ...

We cut to Gloria, wearing a pretty white lace dress, holding a shovel, as Jay cowers nearby.

Gloria: Whaaat? First you smash it (slams shovel to the ground on unseen rat), then you cut the head off. (Turns shovel and makes cutting motion while Jay flinches.)

Gloria: (handing Jay the shovel) I go to church now.

Jay: (to camera) She left the head out there to send a message to the other rats.

Likewise, gay couple Cameron (Eric Stonestreet) and Mitchell (Jesse Tyler Ferguson) keep us interested not by spewing a steady stream of "we're gay!" jokes like they might on other shows, but by taking pains to politely tolerate each other's flaws and sidestep conflict like all couples do. When Mitchell gushes about building their adopted daughter, Lily, a princess playhouse, Cameron explains to the camera that Mitchell has a bad habit of injuring himself and others when power tools are involved. "If an accident does happen, I hope he kills me," Cameron tells the camera, "because I don't think I would be a very inspiring disabled person." Later, Mitchell enlists his dad Jay's help in building the castle.

Mitchell: Remember how much fun we had putting that bookshelf together?

Jay: (to camera) That was my Vietnam. And I was in Vietnam.

Of course the show's writers take plenty of comedic advantage of the fact that Cameron and Mitchell are gay -- they just do it with relatable or familiar situations, or by highlighting the generation gap between Jay and his son. And almost any scene with Jay and his son-in-law Cameron is memorable, simply because Stonestreet's depiction of Cameron's very gentle awareness raising is so sweet and spot-on, while O'Neill's grumpy straight patriarch walks the perfect line between macho buffoonery and a very earnest desire to get up to speed with the changing times.

The couple also presents the perfect opportunity to deconstruct the precious, oppressively p.c. realm of liberal parenting while simultaneously underscoring the ignorance that's still afoot. In a recent episode, Cameron and Mitchell are told that being gay dads with a Vietnamese adopted daughter will make Lily a shoe-in at the prestigious Billingsley Academy preschool. They're feeling pretty smug about their chances while waiting for their interview, until they spot their competition: a lesbian couple, one of whom is in a wheelchair, with an adopted son from Africa. "Disabled interracial lesbians with an African kicker!" Cameron gasps.

During their interview, Cameron pretends he's an American Indian out of desperation. "The tribe elders foretold that, though I lay with fire-haired man," he says, gesturing toward Mitchell, "the Giving Hawk would bring us baby, with her skin the color of sweet corn, which my people call maize." Stupid and goofy, sure, but this is the flavor of stupid and goofy that, against a backdrop of sharp cultural commentary, hits the spot.

In another episode, though, Cameron gets Lily a spot in a TV furniture ad, only to find that there's a woman doing a cartoonish Japanese voice-over every time she and another Asian child appear on-screen. "Lily is Vietnamese, not Japanese, but you wouldn't know that," Cameron tells the director, "because you're only interested in seeing these children as interchangeable stereotypes, not human beings!" Then Cameron marches over and picks up the wrong kid.

The show's most traditional family, the Dunphys, might seem relatively pedestrian compared to Jay and Gloria and Manny (Rico Rodgriguez) or Cameron and Mitchell, but Ty Burrell is so absurdly good as self-congratulatory loser-dad Phil Dunphy that there's a built-in safety net with any of their storylines. Likewise, every time Haley's (Sarah Hyland) hapless boyfriend Dylan (Reid Ewing) enters the picture, things liven up. One day when Claire (Julie Bowen) is sick with a cold, Phil warns Dylan, "Don't get too close to my wife." Dylan responds in shock, "Haley told you about that? It was just a dream!"

Just as the writers use Cameron and Mitchell to capture the absurdities of hothouse-flower parenting of small children, they use Phil and Claire not only to demonstrate the perils of raising bigger kids, but also to capture the existential dread that creeps in once your kids get older.

Claire: A minute ago, they were babies. Now they're driving. And soon, we'll be dead.

Phil: Whoa! You're leaving out a few great minutes there! Retirement, old age, a cool chair that goes up the stairs!

Phil: Don't apologize! I love you when you're human.

Even though "Modern Family" features imaginative storytelling and vivid, layered characters that hold our attention week after week, every one of its characters is human, first and foremost. Rather than delivering up cartoonish stereotypes, "Modern Family" offers us thoughtful characters whose flaws and prejudices are balanced out by a glimpse of their big-hearted urges and pure intentions. They're hapless, smug, confused, pathetic and human -- and we love them for it.