As New Yorkers plot to expand their liquor business, things get bloody in Atlantic City 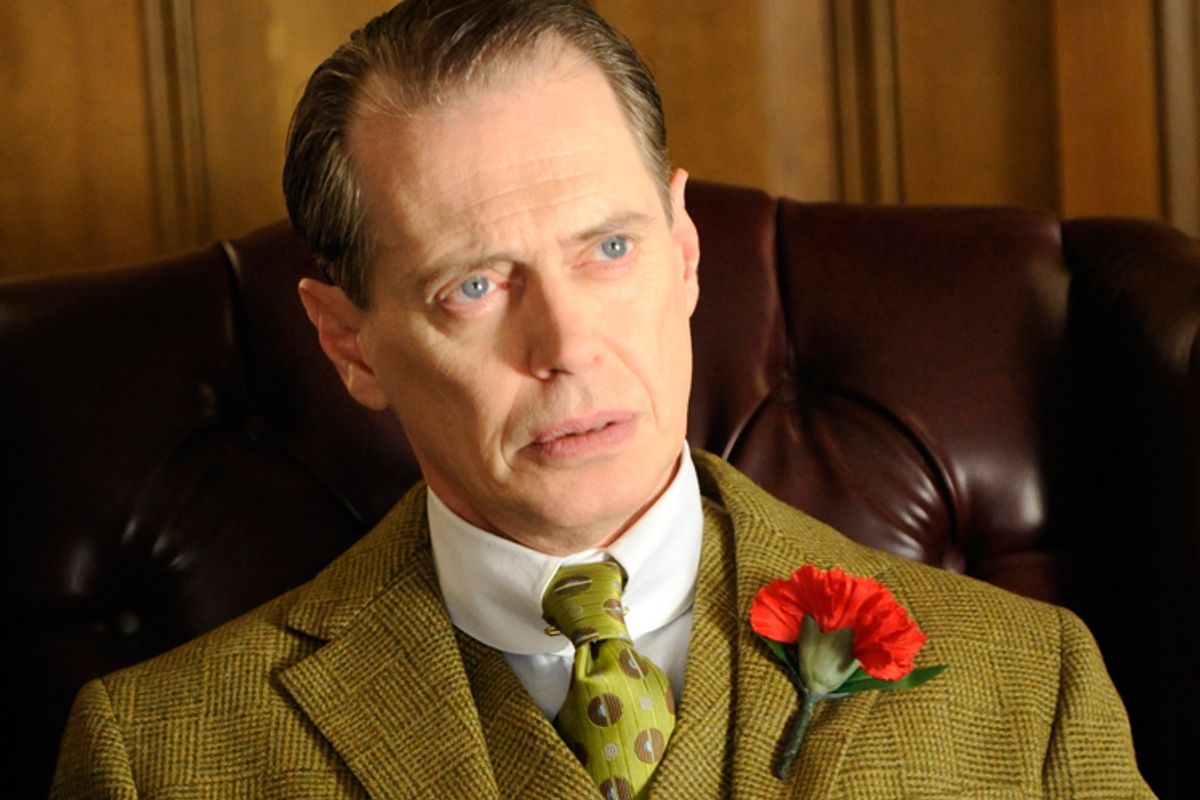 Much of last week's "Boardwalk Empire" was set at the Republican National Convention, which ended with a little-known Warren G. Harding winning his party's nomination. This week, in "Belle Femme," the wars of succession really heat up. In the opening scene, Nucky visits his brother, Eli, in the hospital, where with the help of his mugged bagman, he finally identifies the D'Allessio brothers as the party responsible for moving in on his territory. While the show has so far mostly presented the D'Allessios in a comic light, Eli knows them as "serious characters," and not just because of the bullet hole in his gut; three years prior, while robbing Philadelphia's storied Bookbinder's restaurant, they killed two customers and shot a busboy in the face. Worse, says Nucky's bagman, "They called me fat."

A good part of the information on the D'Allessios is conveyed not by Eli but by his right-hand man, Deputy Halloran, who till now has mostly been seen as a bumbling meathead. But with Eli laid up, Halloran sees a chance for advancement, so he's on his best behavior. "I'm at your service, now and in November," he tells Nucky after convincing him to make him acting sheriff; no sooner has he gotten the job then he's looking to replace Eli permanently. As it turns out, that's not a bad idea. The question of what the city's sheriff was doing in an illegal casino at 3 a.m. opens a door Nucky would sooner keep sealed, especially with a squeaky-clean Democrat challenging the city's obliging Republican mayor. The idea that Eli might have been doing his job is apparently too far-fetched for anyone to believe.

Margaret, meanwhile, is babysitting Harding's mistress, Nan Britton, who's being kept on ice until after the election. Nan sees herself as the self-sacrificing woman behind a powerful man, accepting their separation because "the country needs him." As Margaret puzzles that one over, the camera cuts to reveal an advertisement for the Democratic mayoral candidate — a reminder that Nan's not the only woman with a man to help.

The question is what Margaret gets out of the transaction. Woman's suffrage is close to ratification, but the extent to which that will translate into political power is still up in the air. As she and Nan shop for clothes in Belle Femme, Madame Jeunet (Anna Katarina) approaches her erstwhile shopgirl with a request: The payments due to her local alderman have recently doubled, and the financial strain is crippling her. (That, or she just doesn't care for her dwindling profit margins.) Perhaps Margaret, with a direct line to Nucky, can intervene on her behalf?

Madame Jeunet coaches Margaret on to best way to employ her feminine wiles, telling Nucky that if Belle Femme goes under, she will have no one to make her look pretty. Margaret, however, tries the direct approach, and hits a brick wall. "This is not a suitable topic," Nucky huffs, collecting his coat. Later, in a moment of postcoital calm, Margaret follows Madame Jeunet's approach, and the results are markedly different. "That's why you wanted her to stay in business," Nucky asks, with the look of an indulgent father. "Why didn't you just say that in the first place?" Not the most feminist way of getting the job done, but it works, and Margaret claims her payment in the form of a free dress from Belle Femme. No more shoplifting for her: She earned this one. (A more forceful vision of female power appears in the episode's penultimate scene, in the substantial form of vaudeville legend Sophie Tucker, played by "One Life to Live" regular Kathy Brier. With her anti-flapper physique and sailor's mouth, she'd make Madame Jeunet green at the gills, but she's muscled her way to the top of the heap.)

With his territory under siege, Nucky wants Jimmy to come down hard on the D'Allessios, but before Jimmy will take the job, he wants Nucky to understand he's dealing with an equal and not a disciple. The first condition, he tells Nucky, is that their discussions will be private, man-to-man, with no intermediaries or onlookers. Second, he's going to make Nucky ask for what he wants, both as a way of forcing Nucky to reconcile himself to the kind of man he is and, although this part goes unspoken, as leverage should their situations diverge again. In other words, Jimmy won't "take care" of the D'Allessios unless Nucky will spell out exactly what that means. Just because Nucky never pulls the trigger doesn't mean he's not a killer, and Jimmy has the power to make him admit it.

Nucky's getting his protection in place just in time. In New York, Arnold Rothstein, Lucky Luciano and Meyer Lansky formalize their relationship with the D'Allessios and their oily collaborator, Mickey Doyle, signing life insurance policies with Rothstein as the beneficiary just to ensure they don't mess around. As Rothstein deals with the D'Allessios, the look of disgust never quite leaves his face, but he's planning a major move into the liquor trade, trafficking in high-end British whiskey rather than the diluted paint thinner that is Mickey's speciality, and he wants Nucky out of the way. The D'Allessios don't need it spelled out for them.

Jimmy hasn't quite connected all the dots, but he does so with an assist from his mother, with whom he's apparently been discussing more than the care of her grandson. Gillian may admire Lucky's performance in the sack, but she's loyal to her son. After she's satisfied her urges, she slips out of the room, taking Lucky's gone with her, and leaves her naked beau to Jimmy's attentions. We know Lucky can't be killed, of course; he's got more than four decades ahead of him. But it's not looking good as Jimmy hustles him down the stairs at gunpoint, during which Lucky lets slip that the D'Allessios are taking orders from Rothstein. Lucky makes the mistake of thinking his adversaries know more than they actually do, and so inadvertently brings them up to speed.

One of the most enjoyable aspect of "Boardwalk Empire" is the extent to which no one gets anything exactly right. They're always missing a piece of the puzzle, or getting the right answer for the wrong reasons. As Nucky shoves Luciano around a corner, he runs into Agent Van Alden and his hapless inferior, Agent Sebso (Erik Weiner), who've been belatedly tipped off to Jimmy's return to Atlantic City. Van Alden thinks Jimmy is his ticket to Nucky Thompson, so he starts interrogating him about the hijacking-turned-massacre in the woods as well as the murder of Margaret Schroeder's husband. The trouble is that the first was carried out without Nucky's knowledge — in fact, much to his displeasure — and Jimmy had nothing to do with the second. Jimmy's prepared to murder on Nucky's behalf, but he hasn't actually done it yet.

Unfortunately for Van Alden, that's not all he's wrong about. He's got Jimmy over a barrel since he flipped the decoy for Jimmy's hijacking, a card he plays by walking the two men past each other in the hallway. But he doesn't realize that the apparently bumbling Sebso is working against him, cannily exploiting Van Alden's contempt for those he sees as inferior. When Sebso says he hid the telegram foretelling Jimmy's arrival in A.C. to spare them the wrath of their higher-ups — who would rather they be racking up arrests than pursuing a pipe dream — Van Alden buys it, and his alarm bells stay silent when Sebso suggests moving their witness to New York to keep him out of harm's way. (If you don't see what's coming at this juncture, you might want to give your glasses a wipe.) As soon as he's found a secluded patch of road, Sebso stages an escape attempt and shoots the witness through the heart, after which he chooses a medium-sized rock with which to smash in his own face.

That's what happens when you trust the wrong people. Just ask Jimmy's wife, Angela, who's been counting on her relationship with Mary (Lisa Joyce) and her photographer husband to provide entree into the New York art world. During a drunken canoodle at Angela's house, Mary's husband tries to coax her into a threesome. "Everyone in Paris is doing it," he informs her. Angela demurs, and their get-together is broken up by Jimmy's unexpected arrival, at which point the husband evidently sees his visions of menage à trois go up in smoke. When he was trying to get under Angela's skirts, he told her her paintings had "a lyrical quality reminiscent of Mary Cassatt," but when she goes to see him at his shop, he says she's a "cheap imitation," and should expect no word from his (likely chimerical) art-dealer friend. If she can't offer him sex, then she has nothing to offer.

That just leaves the small detail of an attempt on Nucky's life. As he's leaving Sophie Tucker's performance, one of the D'Allessios spots him and cries out his name as if greeting an old friend, but actually fingering him to a waiting gunman. Nucky's trusty chauffeur steps in and knocks the shooter off-balance, getting off a shot with his own gun as the man flees, but the would-be assassin's bullet finds another target, an innocent bystander whose bodily fluids spatter all over Margaret's newly grafted dress. Turning on the charm may get you a nice outfit, but it won't stop you from getting blood on it, or getting shot yourself.