Pat Caddell and Doug Schoen's prescription for President Obama: Just give up already! 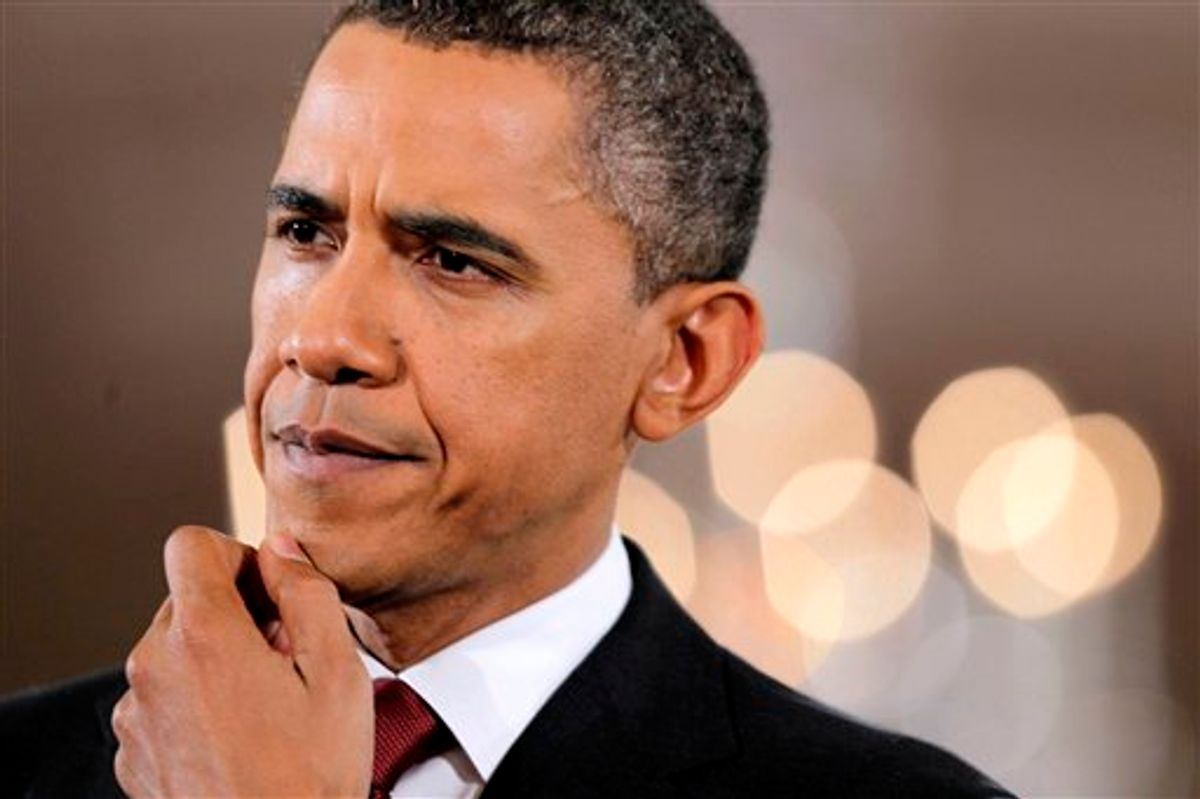 FILE - In this Nov. 3, 2010 file photo, President Barack Obama listens to a question during a news conference in the East Room of the White House in Washington. Catholics, older people, women, and young adults shifted towards Republicans in this month's elections and failed to support Obama's Democratic Party as they did in 2008, according to national exit polls. And according to an analysis by The Associated Press of exit polls in 26 states, Obama's diverse voter coalition appears even more troublesome for him in places expected to be closely contested in the next race for the White House. (AP Photo/Charles Dharapak, File) (AP)
--

The days and weeks that follow a decisive election like the one we just witnessed are a haven for hyperbole and hysterical overreactions and misinterpretations.

LBJ, for instance, declared that “these are the most hopeful times since Christ was born in Bethlehem” after his 1964 landslide, then watched Vietnam destroy his presidency and Republicans post massive gains in the next election. Republicans heralded the end of New Deal/Great Society liberalism after Ronald Reagan’s win in 1980, only to suffer crushing losses in the 1982 midterms as blue collar voters returned to the Democratic fold. Bill Clinton was left for dead by just about everyone after the 1994 Republican revolution, but cruised to reelection in 1996. Karl Rove prophesied a “permanent Republican majority” after George W. Bush’s reelection, and we all know how that turned out. And on and on.

You’d think we might learn something from all of this, and in some ways we have. There is noticeably less end-is-near panic among Democrats today than there was after the ’94 election, and pundits are generally willing acknowledge that President Obama may yet be reelected (perhaps even by a comfortable margin) -- a possibility few were willing to grant when it came to Clinton. (This December ’94 quote from a Democratic strategist named Ted Van Dyk was typical: "The president is done. He's finished. He's like that old Thurber cartoon where the guy has just had his head sliced off in a fencing match. He just hasn't noticed it yet.")

But not every Democrat and not every pundit is willing to take a breath and a step back before opining on What The Midterms Mean. Which brings us to a truly awful Op-Ed in Sunday’s Washington Post from Pat Caddell and Doug Schoen, Democratic tacticians (well, they both were at some point -- I can’t remember the last campaign Caddell was involved with) who claim that the only reasonable course available to Obama now is to….make himself a lame duck:

We do not come to this conclusion lightly. But it is clear, we believe, that the president has largely lost the consent of the governed. The midterm elections were effectively a referendum on the Obama presidency. And even if it was not an endorsement of a Republican vision for America, the drubbing the Democrats took was certainly a vote of no confidence in Obama and his party. The president has almost no credibility left with Republicans and little with independents.

The best way for him to address both our national challenges and the serious threats to his credibility and stature is to make clear that, for the next two years, he will focus exclusively on the problems we face as Americans, rather than the politics of the moment - or of the 2012 campaign.

It’s hard to decide which is worse here: the diagnosis or the prescription.

Sure, it’s easy to take a midterm election in which the White House’s party loses more than 60 seats in the House, six in the Senate and a whole bunch of governorships and state legislatures and conclude that the president has "lost the consent of the governed." But history, as I noted above, also shows us how quickly presidents who suffer gruesome midterms can win that consent back. In Harry Truman’s first midterm, Democrats lost 55 seats and control of the House. In Ronald Reagan’s, the GOP lost 26 in the House (yes, 26 doesn’t sounds so bad, but remember that Republicans only had 190 seats to start with in 1982 -- and that the result was met with devastation and panic by Republicans at the time). And in Clinton’s, Democrats lost 54. The exact same claim that Caddell and Schoen now make about Obama could have been made -- and was -- about all of these presidents. And all of them bounced back to win reelection decisively. (Caddell and Schoen are willing to concede that Obama could win in 2012, but only by engaging in a "scorched earth campaign.")

Then there’s the Caddell/Schoen claim that removing himself from the ’12 mix would somehow liberate Obama to become the transcendent president he was supposed to be. There is some superficial appeal in what they are proposing -- until you remember that we’ve seen it before: It’s called a second term. Every time a president has been reelected, we have heard that he will now be free to reject the demands of his party’s base and to focus on important, legacy-enhancing work. But every time we’ve instead gotten…a pretty typical presidential term. Even if the president himself isn’t gearing up for another campaign, just about everyone else in Washington is. If anything, announcing that he won’t run in ’12 would cripple Obama. It would be an admission of weakness and defeat.

Chances are that, on some level, Caddell and Schoen understand this. In the past few years, they’ve essentially established themselves as professional self-loathing Democrats -- supposed experts with important-sounding credentials who will sound off (often in Rupert Murdoch’s Wall Street Journal or on Fox News) about their dismay that the Democratic Party and its leaders are committing political suicide. Never mind that the party has won the popular vote in four of the past five presidential elections and never mind the Democrats’ success in 2006 and 2008: In Caddell/Schoen World, the Democratic Party is perpetually wheezing out its final breaths, a victim of its refusal to take seriously the criticisms of Sean Hannity and Bill O’Reilly.

It’s a clever game they’re playing. The media never tires of pundits who take shots at their own party -- and there’s always room at Fox News for a self-loathing Democrat. And for Caddell, one-time Joe Biden confidante who wore out his welcome in professional Democratic circles about two decades ago, writing Op-Eds like Sunday’s gives him a measure of relevance -- at least in the media’s eyes -- that he’d never otherwise enjoy.

It’s possible, of course, that Obama won’t stage a comeback and that he will be drummed out in ’12 -- or that he’ll eke out a win only by getting really dirty and nasty. Caddell and Schoen have no problem acknowledging this. But it’s also possible (if hard to imagine at this moment) that Obama's approval rating will be near 60 percent on Election Day ’12 and that pundits will be swapping theories about how and why Americans fell back in love with their president. Just don't hold your breath waiting for Caddell and Schoen to admit this. It might damage their brand.