"Porno-scanners": At last, the public objects

A growing backlash against the latest TSA "security theater" tactics is overdue, but welcome. Are we growing up? 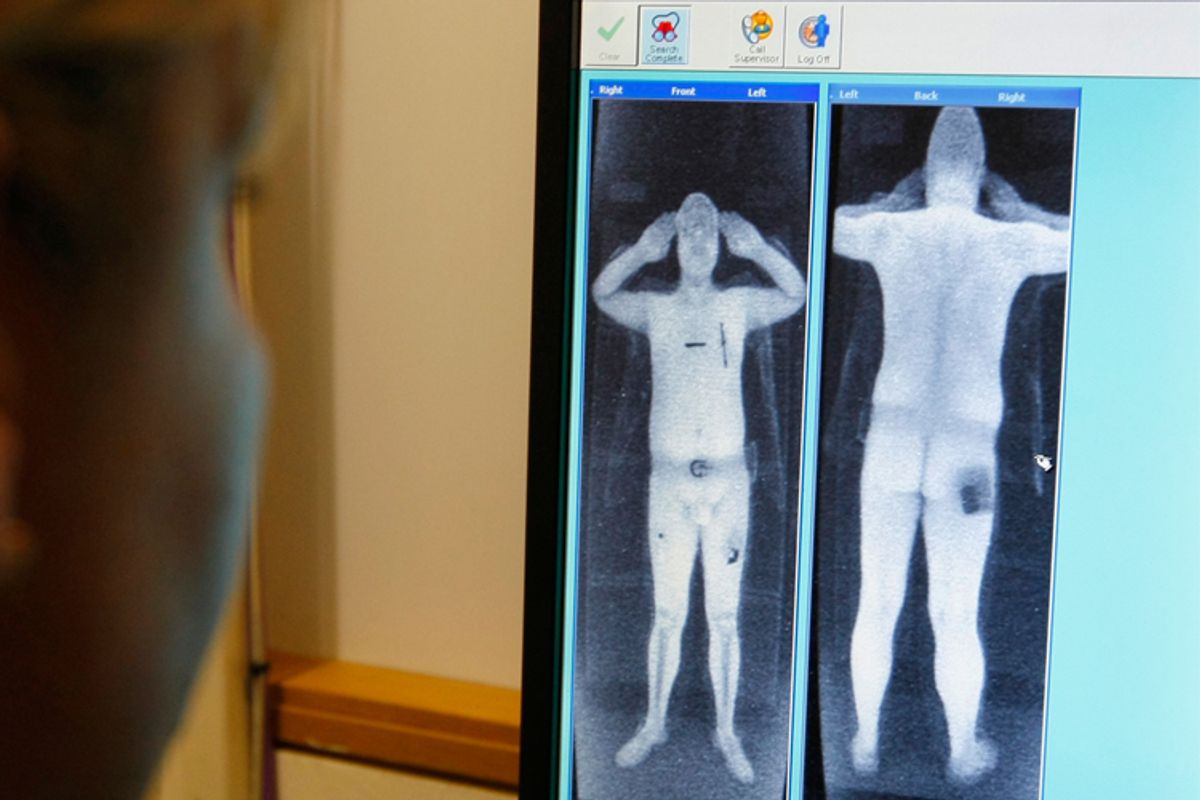 A security officer examines a computer screen showing a scan from a full-body scanner.
--

Have we finally reached our limit? Have Americans finally found a government intrusion on their personal privacy that bothers them enough to say, "Enough!"?

The backlash does seem to have arrived, finally, with the installation and growing use in airport security lines of what the Transportation Security Administration calls "Advanced Imaging Technology" -- devices that are also quite accurately known as "strip-search scanners," because they capture extremely detailed images of people's bodies. The government has lied about how these devices work -- including an early claim, later refuted, that the images couldn't be saved or shared -- and reputable scientists have challenged the TSA's assurances that the devices are safe after multiple, long-term exposures.

In the past several weeks, travelers have learned what happens when they exercise their right to refuse to go through these scanners. They're subjected to an intimate groping, including serious contact with their genitals, in a process that is quite clearly designed to make travelers so uncomfortable that they'll opt for the naked-image scanner as the lesser of two evils.

All of this is freaking people out in a bipartisan way. The blogosphere and YouTube are aflame with protests and fury from people of all political persuasions. (This nearly year-old video of German protesters stripping in an airport and handing out leaflets objecting to the scanners is gaining new currency.)

A call for a National Opt-Out Day on Nov. 24, the day before Thanksgiving, always the busiest travel day of the year, is gaining some momentum. Even some traditional media organizations -- which normally fall into line by covering security measures, no matter how intrusive or idiotic, as Striking the Right Balance Between Security and Privacy -- are starting to question the TSA's latest tactics.

What's fascinating about the protests over the porno-scanners (the other clever name I've seen for the devices) is that they're causing an uncustomary outbreak of common sense. Notably, people who are normally the first to endorse any level of privacy invasion in the name of security are starting to recognize that A) we can't have perfect security and B) that the TSA's version is more in the category of what real experts call "security theater."

Which makes me wonder why no one makes the logical connections beyond this particular flagrant abuse. Where's the outrage over the years of abuses by the Bush and now Obama administrations in spying on us without warrants or probable cause? Where's the outrage over the massive databases that government and private companies are compiling on everyone, gathering our most private information and using it for purposes about which we have no say, much less control.

The outrage this time is because it's average people being treated like criminals -- and to their faces (and crotches).

One of these days we're going to grow up and recognize, as Salon colleague Patrick Smith likes to point out, that air travel has always come with some element of risk (though it's much safer, statistically, than driving our cars). We'll grow up and recognize that sooner or later, terrorists are going to plant a bomb on a plane that will explode and kill everyone aboard. This is simple reality, unless we make security so impossibly strict -- including an outright ban on electronics altogether -- that the airline industry goes under for lack of business.

The TSA has an impossible job. Pushed by politicians -- and, to be fair, a paranoid public -- it ratchets up the security measures that add only the most incremental improvements. I'm betting the Obama administration figures -- probably correctly -- that these new protests will go away the next time a terrorist does bring down a plane. (Given Americans' recent attitudes, I'm also betting that the right-wingers now protesting the porno-scanners and groping will end up celebrating lots of new invasions of privacy, especially of people with brown skins: "Whatever it takes" to prevent another plane from being bombed.)

I want to say a word about the TSA employees who are on the front lines of this mess. I don't believe they're bad people. With a tiny number of exceptions -- remember, there are bad people in every profession -- the TSA personnel I've encountered in airports have been polite and professional. They have jobs that are often dull, however, and their bosses make them do things that engender hostility from the traveling public, which ends up creating a negativepositive feedback loop.

I haven't been in a circumstance, yet, where I've had to opt out of a strip-search scan, but I will do so at every opportunity. And when a TSA employee fingers my testicles and penis, I plan to say to him, "This must be as degrading for you as it is for me. Why do you work for such people?"