The right-wing radio host tore into me in an on-air rant Monday. Would you believe he got a few things wrong? 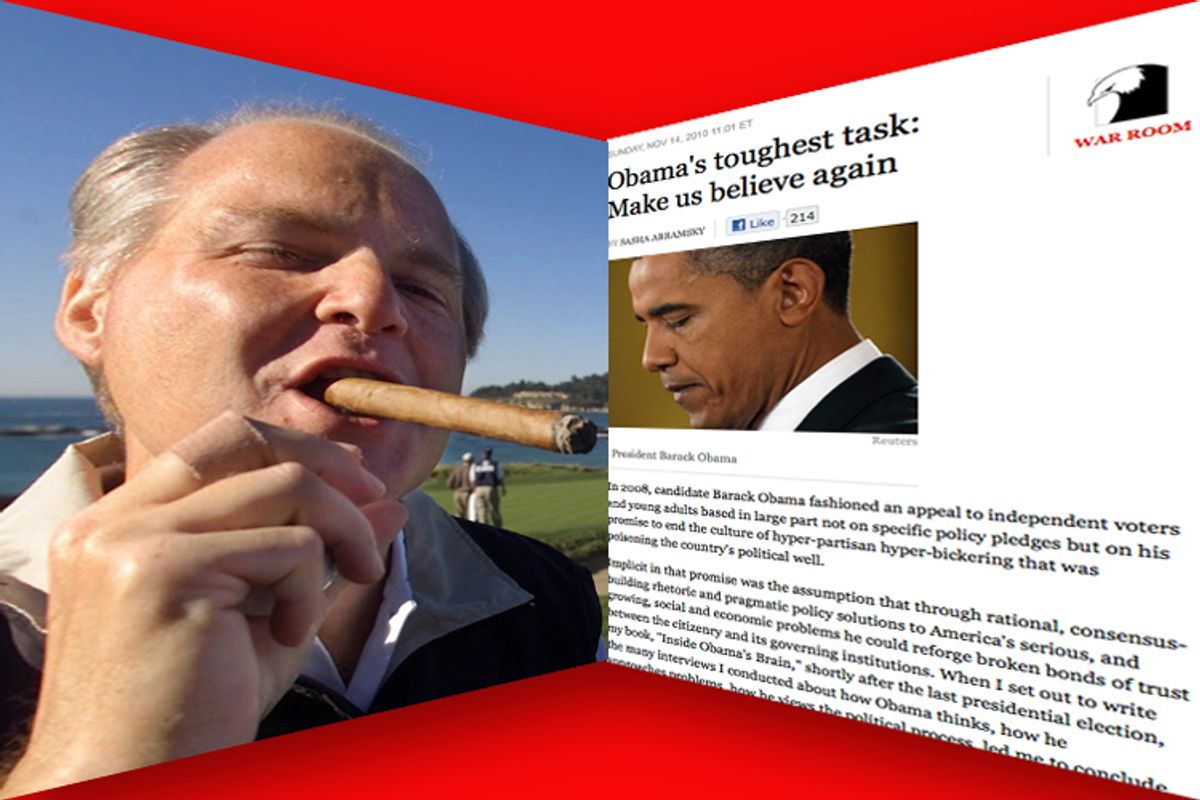 This afternoon, a day after Salon published my essay about Barack Obama, I had the rare privilege of hearing Rush Limbaugh spend three-and- a-half minutes savaging me as a "stupid babe," as "some woman at Slate.com….Salon.com," for daring to claim that Obama believes in good governance and a regulatory infrastructure to tackle the excesses that led to our current economic mess. [Full audio of Limbaugh's rant can be found here.]

Now, I don’t mind being called a "babe," though one would think that a radio superstar like Rush could afford fact-checkers -- you know, the people who do complicated research tasks like google the name "Sasha Abramsky," look at the websites of the people about to be savaged (in my case it’s particularly, and unsurprisingly easy to find, at www.sashaabramsky.com), and realize that a photo of a person with a goatee is, in most circumstances, a guy and not a "babe."

Had Rush then concluded that I was a "stupid bastard," or "stupid dude," or some such, one might have listened and found him to be uncouth, rabid, nasty… but at least coherent. Since we’re getting personal here, however, let’s call a spade a spade: labeling me a "babe" just seems, well, plain dumb.

As for the more substantive criticism -- that I’m stupid -- one might conclude from the above-described snafu, that to be charitable, this is a case of the pot calling the kettle black. Except, that would involve me being willing to accept the term "stupid" as a label befitting me as well as Limbaugh -- and, sorry Rush, but I’m not willing to go down that route. This one’s all on you.

What I argued in my article was that Obama believes in good governance, and that he'd hoped he could convince people from across the political spectrum to raise the caliber of the political discourse once he was in the White House. I also said was that this was a mistake -- that it led Obama to try to find common ground with political adversaries who made a pretty explicit decision not to work toward good policy solutions in the first years of the Obama presidency but to do anything and everything to oppose his policy initiatives so as to make him look weak. Hence the bizarre spectacle of Republican congressmen and senators opposing policies they had previously supported: decrying policies intended to stabilize the financial system that many of them had signed on to when they were initiated by Republican president George Bush; opposing even incremental parts of the healthcare reform package that they had previously advocated; trying to stop Democrats from extending unemployment benefits for the long-term unemployed (yes, the hard-hurting people Rush supposedly wants to liberate from Big Government intervention), opposing even minimal cap-and-trade policies designed to rein in greenhouse gas emissions; and so on.

This isn’t the politics of good faith, rational compromisers; it’s the politics of ideologues -- which is why Limbaugh is so delighted. After all, decades from now, there will likely be a new noun in the language. A limbaugh: meaning a particularly inflexible, dogmatic, unthinking and just plain unpleasant demagogue. This is a man who has made a career out of incivility; and what better tribute to his impact on the national culture than the increasingly uncivil nature of 21st Century American politics?

Actually, now that I think about it, he’s more likely to be immortalized as a verb than a noun -- "to limbaugh." When I was a kid, we used to practice "the limbo," seeing who could stay on two feet while bending backwards to limbo under a continuously lowered horizontal pole. It was a good game for children, but not nearly as good as the game played by so many adults today. "To limbaugh": setting the political bar low, dancing under it, and then seeing whether you can get it to go even lower.

All things considered, I’d rather be a stupid babe than a limbaughing limbaugh any day of the week.