The fascinating morality of "The Walking Dead" 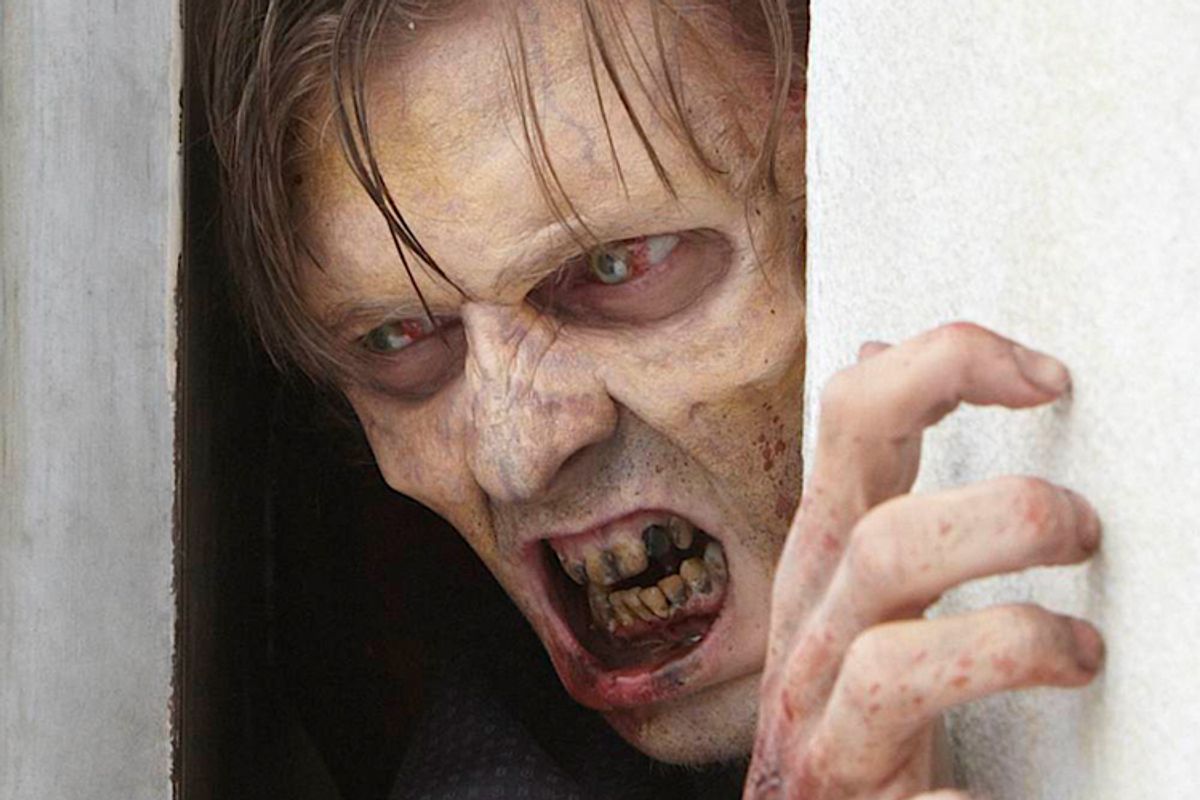 A still from "The Walking Dead"
--

"The soul of man is a dark forest," wrote D.H. Lawrence in "Studies in Classic American Literature." In civilized life, that forest stays mostly hidden, thank goodness; that's why they call it "polite" society, quote marks optional. Stories let us explore the wooded interior -- especially horror, science fiction and fantasy, pop culture's version of ancient folk tales. AMC's horror series "The Walking Dead," based on Robert Kirkman's comic book series, is one of the better folk tales out there. As horror and as drama, it's workmanlike, sometimes more than that. It's slow and drab, its performances range from B-movie sturdy to wooden, and the non-American actors' accents slip with distressing regularity. But as a case study in situational ethics, it's terrific.

The camp inhabitants' arguments about Merle's fate -- whether it was defensible to leave him, and whether it made practical sense to try to rescue him when Rick's group returned to Atlanta to retrieve lost guns and tools -- crystallized themes that had been bubbling up in the previous two episodes. One person's racist goon is another person's beloved brother. Just because a man lacks the ability work and play well with others isn't necessarily justification for chaining him to a pipe in Zombieville. And I have to admit that as much as I loathed Merle last week for his bullyboy smarm and white supremacist blather (he was a hate-spewing cartoon character, like something out of an early Stephen King novel) I found myself agreeing with Daryl that leaving him was an inhuman thing to do. Rick's reaction to Daryl's grief and rage indicated that he thought he'd done wrong and was properly ashamed; I suspect he spearheaded a return to downtown mainly to redeem himself, with the stated desire to retrieve the guns and tools serving as pretext.

Rick wasn't the only one with second thoughts. "Dixon's alive and he's still up there handcuffed on that roof," said T-Dog (IronE Singleton), a black man who was terrorized by Merle until he couldn't turn the other cheek any longer. "That's on us." T-Dog 's tone suggested he was all right with the decision to abandon Merle, but he had doubts from start. It was T-Dog that chained the rooftop door shut to prevent the dead from getting at Merle; he mentioned this fact more than once, as if reassuring himself that he wasn't as bad as everyone else in the expedition.

We're just three episodes into "The Walking Dead," and already the show seems to have a knack for showing the complexity of the human animal, how the definition of what's moral and right changes depending on the situation, and how decisions are affected by the emotions people feel when they're under pressure (and the holes in their knowledge). Time after time, we see characters risking their safety to help other endangered humans, not because there's any immediate, tangible benefit to them (the risk of getting caught and eaten would be argument #1 for laying low and letting the walkers feed) but because their moral compass is still functioning and they have to heed it, otherwise they can't live with themselves. Morgan Jones (Lennie James) and his son Duane (Adrian Khali Turner) didn't have to save Rick in episode one, and Glenn (Steven Yeun) didn't have to save Rick in downtown Atlanta in episode two. But because they're decent people they did the decent thing, and now Rick – whose increasingly ragged state trooper uniform is starting to remind me of the knightly armor that Max Von Sydow wore throughout "The Seventh Seal" – is determined to pay their decency forward. (Justifying a return trip to Atlanta, Rick even brings up his pilot-episode promise to contact Morgan and Duane via walkie-talkie, even though the Joneses seem like reasonable people who wouldn't curse Rick's name if he didn't make good on his pledge.)

But despite the many spontaneous displays of kindness, there are no Boy or Girl Scouts on this series, except maybe Rick (and as I see more of him, he seems less a saintly do-gooder than a psychologically damaged, compulsive crusader like Jack Shepard on "Lost," or Seth Bullock on "Deadwood" minus the temper). Rational self-interest is the order of the day. That's both understandable and necessary. But the "rational" part is tricky. As members of a makeshift, free-floating community, the "Walking Dead" characters have practical as well as moral reasons for being kind to their fellow non-dead. But as individuals, they have a corresponding obligation to balance "Do unto others" with "What's in it for me?" When Rick asks another of the camp's inhabitants, Dale (Jeffrey DeMunn), for a bolt-cutter to free Merle, Dale counters by complaining that there's a reason why he hates to loan out tools, then asks Rick for one of the guns he's going to retrieve. ("Done," Rick replies.) Meanwhile, Rick's wife, Lori (Sarah Wayne Callies), is outraged that Rick is going back less than a day after his miraculous reappearance – and really, can you blame her? Rick's laid-back righteousness can seem like self-righteousness, and Lori's barely-contained looks of frustration and terror suggest that she's seen him act this way before, and is letting him have his way not because she thinks he's right, but because she knows this is a battle she can't win. (When he first floats the notion of going back, she asks him if he's asking her or telling her. He says he's asking her, but he's telling her.)

This is a classic expression of what could be called Zombie Values – the push-pull between community and individuality, nobility and self interest, that animates all zombie tales, even when the screen is filled with charnel-house imagery like the deer munching/zombie beatdown/decapitation in Sunday's episode. Because Kirkman's source material is so down-to-earth – and because the series' supervising producer, Frank Darabont ("The Shawshank Redemption," "The Mist"), has always been drawn to stories of people struggling to be good in awful circumstances – that the articulation of conflicting values becomes the main attraction. "The Walking Dead" is "The Lord of the Flies" with ghouls. As I wrote in a previous column about the series, the title does not refer to zombies, but to the mortal characters, who, like all of us, have to decide a thousand times a day what the "right" thing is and how, exactly, to do it, even though we're all going to perish eventually of natural or unnatural causes and end up fertilizing daffodils.

More so than any zombie tale since "28 Days Later" and "28 Weeks Later" (technically "zombie-by-proxy" films, since the monsters were zombie-like but not undead) this series is a blood-and-guts morality play. But it complicates audience response by continually supplying new information that fleshes out scenarios you thought were cut-and-dried. Most horror encourages the viewer to ridicule or condemn the characters' for making decisions out of ignorance or sentiment; the privilege of yelling, "Idiot! Don't let that vampire into your bedroom!" or "She got bit by a zombie! She's not your mother anymore! Shoot her in the head!" is one of the minor pleasures of horror-movie watching. (I've had a number of arguments over the years about whether Ripley should have gone back for her cat at the end of the original "Alien." The answer seems to come down to how much you like cats.) But as much as we hate admit it, what we believe depends on who we are and where we're standing. If we were in situations like the ones presented in horror films, we wouldn't have the luxury of standing outside of the story and feeling smugly superior to it. We'd be struggling to get through a sentence without soiling ourselves in fright.

When Merle first appears, he's the least nuanced, most repugnant character we've on the series up to then, the kind of redneck thug whose main dramatic function is to get his face bitten off by Blacula. But over two episodes, the "The Walking Dead" gives us two visions of Merle: the goon strutting around on the department store roof acting like a survivalist Archie Bunker, and the superhero and mentor remembered by his younger brother, Daryl -- a man whose skill with a crossbow suggests that a mastery of violence is something that runs in their family, and that could be very useful in a landscape swarming with ghouls. In Hobbes' "State of Nature" -- which is what zombie world basically is; thus the reflexive reversion to tribal groups with gender-stereotyped divisions of labor -- you need all sorts of people to survive en masse. While it's advisable to have a certain number of tacticians, doctors, cooks, hunters, gatherers, and detailed-oriented accountant types in the mix, it might not a bad idea to have a few human pitbulls like Daryl and Merle, provided you can contain their unpleasantness and channel their destructive energy.

The show's treatment of Merle is just the most obvious example of the pride it takes in confounding our first impressions. The first time the show cuts away from Rick's post-apocalyptic re-awakening to show that Lori has become the lover of Rick's best friend, Shane (Jon Bernthal), we're conditioned by a lifetime of B-movie shorthand to think of Shane as an opportunist and Lori as a betrayer. But by episode two, it's clear that their sexual relationship grew out of knowing each other as friends for many years, and that they would not have become lovers if they'd known Rick was still alive. By episode three, Rick returns, and Lori and Shane end their relationship instantly. (I like how the episode's director, Gwyneth Horder-Payton, shows the breakup happening wordlessly -- in the glances that Shane exchanges with Lori when she and her son are tearfully embracing Rick.) When Rick leaves camp a mere day after returning (the more I think about this, the more I resent Rick), Lori cauterizes the separation by warning Shane to stop being chummy with her son.

Shane accepts Lori's edict without much fuss. But he's hurt -- and I suspect his suppressed anger over the breakup accounts for the excessive beating he administers to the wife-abusing fellow camper. If Shane were less mature or socialized, he wouldn't have separated from Lori right away. He would have become a hateful and possessive caveman, like the wife-beater. The scene where he takes Carl (Chandler Riggs) frog fishing – a passive-aggressive way of holding onto the inherited nuclear family he was briefly part of – suggests that he doesn't control his feelings as completely as he might wish. When Shane pounds the wife-beater to a bloody pulp, his mix of icy moral certitude and hot-blooded rage reminds me of Bullock on "Deadwood," who often attacked men that symbolized what Bullock was afraid of becoming.

At the end of this episode I didn't know quite what to make of any of the major characters. The creators of "The Walking Dead" should take that as a compliment.