Women aren't any more fiscally impaired than men. So what's with all the money books with pink covers? 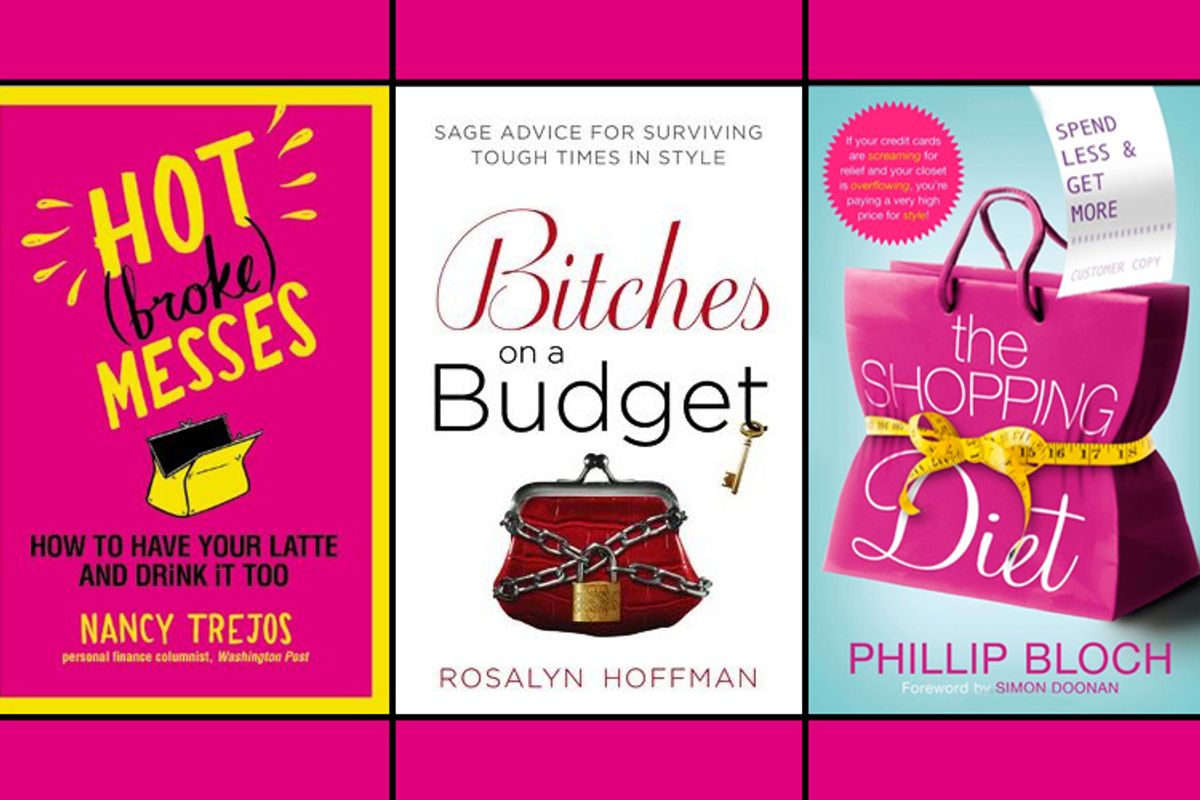 I've never ventured into the money management aisle at my local bookstore (and I have the credit card debt to prove it) but, were I to decide to spend some money to learn how to spend less money, I would find a special sub-section just for me, and all other literate females. As if I needed more reason to avoid the subject of finance, said section is apparently color-coded for the ladies, just like the rest of the bookstore/our entire world, with the color pink. Amazon.com's special "women and money" section is full of book covers illustrated with purses and shopping bags and high heels (what, no cosmos?). All you really need to know about this genre is encapsulated in one popular title: "SHOO, Jimmy Choo! The Modern Girl's Guide to Spending Less and Saving More."

It's enough to convince the casual observer that women have major money issues -- but research belies this onslaught of chick-lit-y financial advice. (Facts! Always getting in the way of sex stereotypes.) Yesterday, the Washington Post's Hannah Seligson wrote about a new book, "Generation Earn: The Young Professional's Guide to Spending, Investing and Giving Back," which was originally intended as an addition to the wall of cotton-candy-colored spines. But, as author Kimberly Palmer began doing research for her financial advice book for the ladies, she realized that women aren't the special-needs cases that they might seem. Seligson summarizes the findings:

The same is true for credit card debt, and there is no significant difference between the sexes when it comes to credit scores. The real disparity here is that more women believe they are fiscally-challenged. "The authors of women-focused financial books capitalize on and reinforce these insecurities and perpetuate stereotypes about women and money with their 'girl, get a clue' tone; their covers and titles that imply we are all out-of-control spenders on shoes and clothes; and their tendency to put financial concepts in the language of dieting and weight," writes Seligson. That isn't to say that there is no pink-free financial advice for women (Suze Orman offers an alternative); nor is it to say that there is no place for gender-specific advice in this arena -- in fact, the persistence of the "math is hard" stereotype is probably proof that there's a need for it. Regardless of whether women are actually financially challenged, the perception that they are is very real.

That's slowly changing, though. "Women in their 20s and 30s are more sure of themselves financially than older Gen-X and Boomer women," says Seligson. I can only hope that Palmer is a harbinger of what's to come: When she found that women are not the budgeting babies they are so often portrayed as, she decided against shooting for the pink shelf and instead wrote a book for people in their 20s and 30s. Someday, when I decide to start acting like an adult and get my money in order, you can bet I'll be reaching for a book like that.