China says its growth is about development, not luxury like in the West. But where'd all the bikes go? 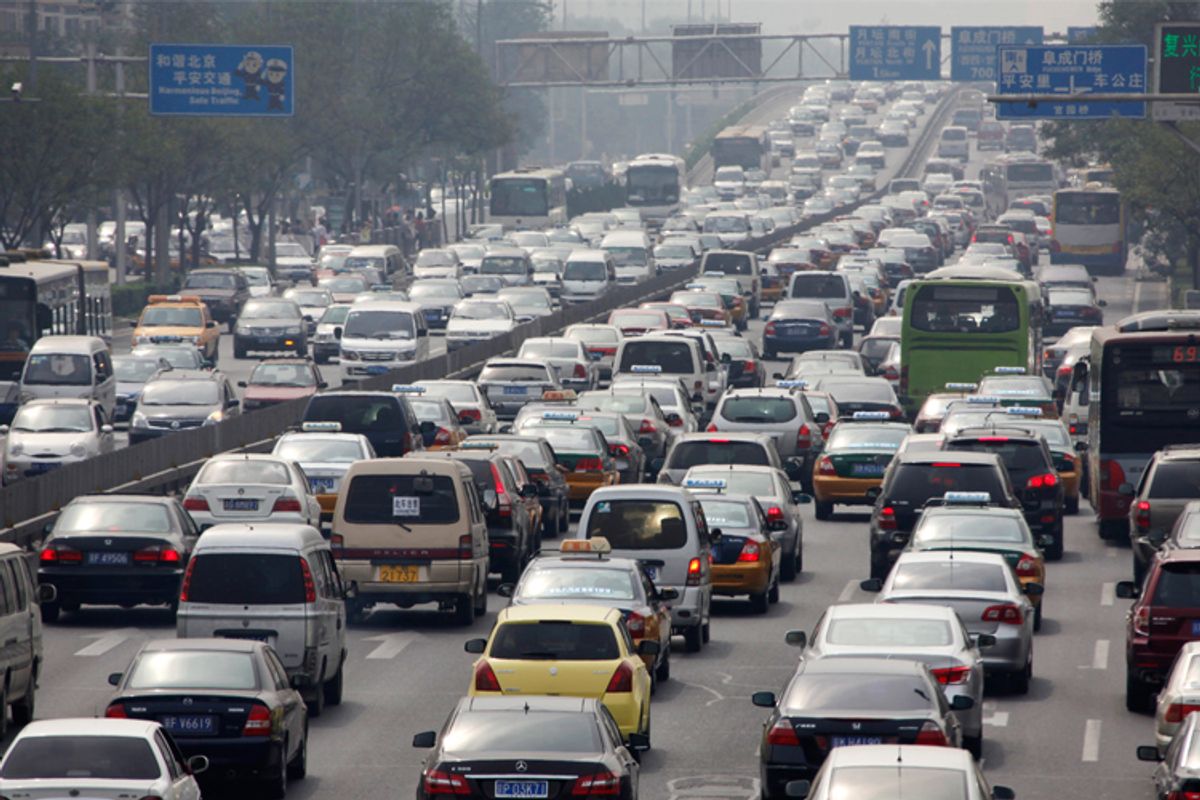 A traffic jam on the second ring road in Beijing.
--

"In China, we have a saying, " said the ambassador. "For the sake of a sesame seed, you drop the watermelon."

The sticky issue of U.S.-Chinese tensions over renewable energy and climate change provides the context. After a busy day split equally between interviews and awful, soul-crushing Beijing traffic jams, our group of journalists was enjoying a rather fancy dinner of exotic Nanjing cuisine. Our host for the night was Ambassador Chen Yonglong, vice president of the Chinese People's Institute of Foreign Affairs. During the course of the evening, Ambassador Chen had emphasized several times the importance of calm and cooperative dialogue between the U.S. and China. He also told us that he had recently joined a committee on climate change.

So in between nibbles of pig ears and freshwater shrimp, I asked the ambassador what he thought about U.S. complaints that Chinese government subsidies aimed at boosting the renewable energy sector were illegal trade practices under the terms that members of the World Trade Organization are supposed to abide by.

He frowned. He thought it was unfortunate. And he delivered the Chinese proverb, which suggested that American focus on the technicalities of how the Chinese government was promoting renewable energy development missed the big picture -- the overriding challenge of reducing fossil fuel dependence and limiting greenhouse gas emissions.

If your priority is climate change, that's no doubt true. If your priority is American jobs, your answer may be different. Cheaply produced Chinese solar panels manufactured by companies with extraordinary access to land, low-interest loans, tax breaks and other perks are making it very difficult for American solar power technology companies to generate profits.

But even more revealing was a comment the ambassador made a little later. In China, he said, greenhouse gas emissions were a result of economic activity aimed at "development." In the West, it was all about "luxury."

Of course, just moments earlier, our group had driven past a Lamborghini dealership in downtown Beijing, just a few blocks from a Gucci store so imposing that it made the Forbidden City palace structures I can see from my hotel window look paltry. On the macro level, I can't disagree with Ambassador Chen. China is still a developing nation where per capita incomes, while growing fast, are far below those enjoyed in advanced industrialized nations. But you can't spend 10 minutes in Beijing without coming to the conclusion that China is hell-bent on pursuing exactly the same development arc as any other decadent, luxury seeking Western country. It is a cliché to note this, but the city is utterly transformed from 20 years ago. Millions and millions of bicycles have been traded in for sleek sedans.

And there is not enough room for them. Traffic is miserable, and one can only conclude that it will get worse. Our group's local contact, a Beijinger born and bred, declared the city "unlivable" during one two-hour drive from the northwest corner of the city back to our hotel. I've seen bad traffic jams in the capital cities of developing nations before, but the truly challenging aspect of what's going on in China is summed up neatly by another comment by Ambassador Chen.