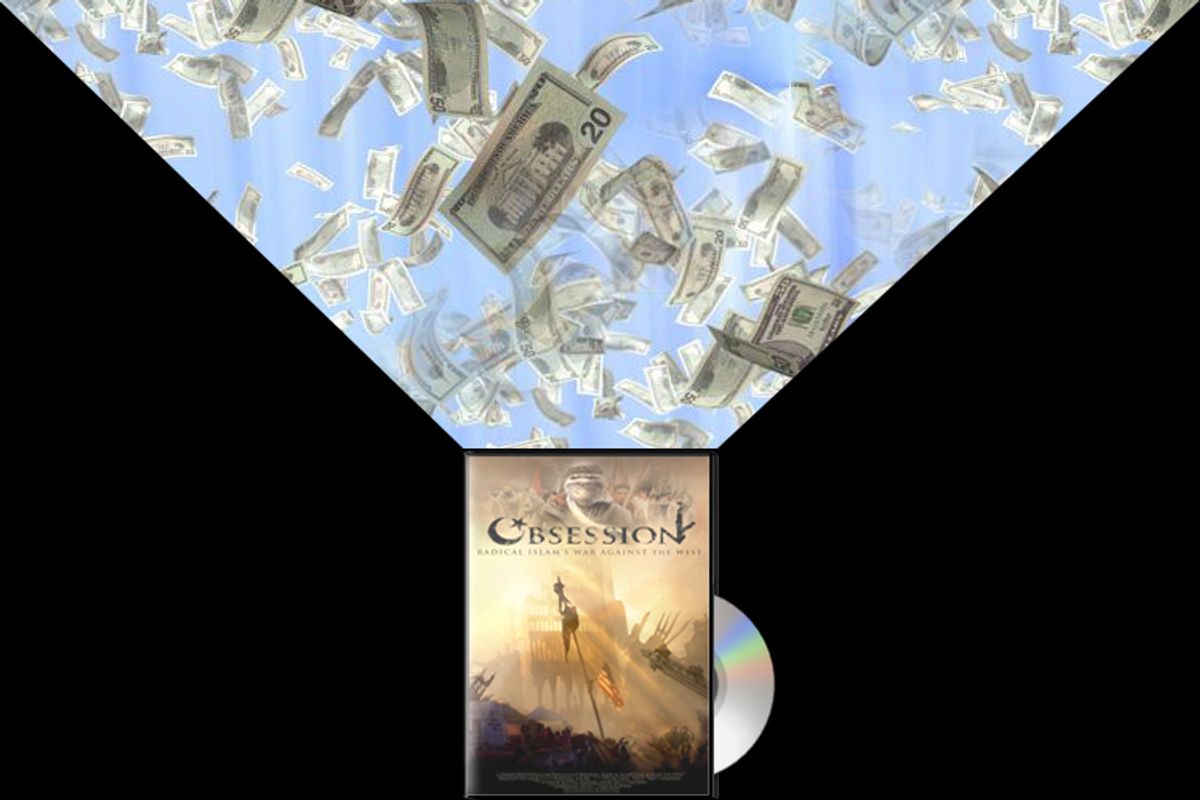 In the heat of the 2008 presidential election, an obscure nonprofit group called the Clarion Fund made national news by distributing millions of DVDs about radical Islam in newspaper inserts in swing states.

The DVDs, 28 million in all, were a boost to Republican candidates who were trying to paint Democrats as weak on terrorism -- and they arguably helped fuel the anti-Muslim sentiment that boiled over in the "ground zero mosque" fight last summer. The film, "Obsession: Radical Islam's War With the West," was widely criticized for its cartoonish portrayal of Muslims as modern-day Nazis.

But who put up the money to send out all those millions of DVDs?

Clarion, which has strong links to the right-wing Israeli group Aish HaTorah and is listed in government records as a foreign nonprofit, would never say.

Indeed, the group does not have to release detailed donor information because of its nonprofit tax status. We knew only that there was serious money behind the effort: Clarion spent nearly $19 million in 2008, the year it sent out the DVDs.

Now, just as Clarion is gearing up to release a new film hyping the threat of Iran, the money mystery has deepened: According to a document submitted to the IRS by Clarion and obtained by Salon, a donor listed as Barry Seid gave Clarion nearly $17 million in 2008, which would have paid for virtually the entire "Obsession" DVD campaign.

Nonprofit groups must submit financial information including the identity of donors to the IRS -- but ordinarily only basic revenue and spending data are made available to the public. In the case of Clarion, an extra page with donor information seems to have been inadvertently included in its public filing. See it here. (It was previously available on public websites that collect IRS forms submitted by nonprofits.)

There's only one Barry Seid Salon could find who might fit the profile of a $17 million donor to Clarion. That would be businessman Barre Seid (note the different spelling) of Illinois, a longtime contributor to right-wing and Jewish causes. But his representative flatly denied to Salon that he has ever given money to Clarion.

The elderly and press-shy Seid is president of Tripp Lite, a large Chicago-based manufacturer of power strips that got into the personal computer market on the ground floor back in the 1980s. Seid has personally poured millions of dollars into Republican campaigns and conservative causes, and his foundation has given generously to the Cato Institute, the Americans for Limited Government Foundation, and the David Horowitz Freedom Center. This year, Seid received an honorary degree from Bar-Ilan University outside Tel Aviv for his work "supporting those organizations which will fortify Israel's position in the world."

But Seid assistant Joan Frontczak told Salon in an e-mail: "Mr. Seid did not make any contributions to the Clarion Fund." And she added: "Mr. Seid is a very private person and doesn't seek publicity of any kind."

"The sources of anonymous donations to the Clarion Fund in 2008 have been incorrectly identified," Traiman said in an e-mail to Salon. "As like many other not-for-profit organizations, we respect the right of private donors to remain anonymous."

But there's another wrinkle here. As first reported by Counterpunch, a right-leaning Alexandria, Va.-based outfit called Donors Capital Fund revealed in its 2008 IRS filing that it gave $17.7 million to Clarion that year, the same year the DVDs were sent out. Donors Capital Fund is what's known as a donor-advised fund: It offers various tax and other advantages to people who want to make large donations to nonprofits.

Whitney Ball, president of Donors Capital Fund, told Salon that the group acts as a charitable vehicle for individuals who give Donors Capital Fund money and tell it where they would like the money to go. "One of our clients made a recommendation for Clarion and so we did it," she said. Ball declined to identify the client or comment on Seid.

Finally, here is the trailer for Clarion's new film, "Iranium." It will be interesting to see if any donor steps forward to pay for wider distribution.