Lindsey Graham and Michele Bachmann agree: No more earmarks, except for their earmarks 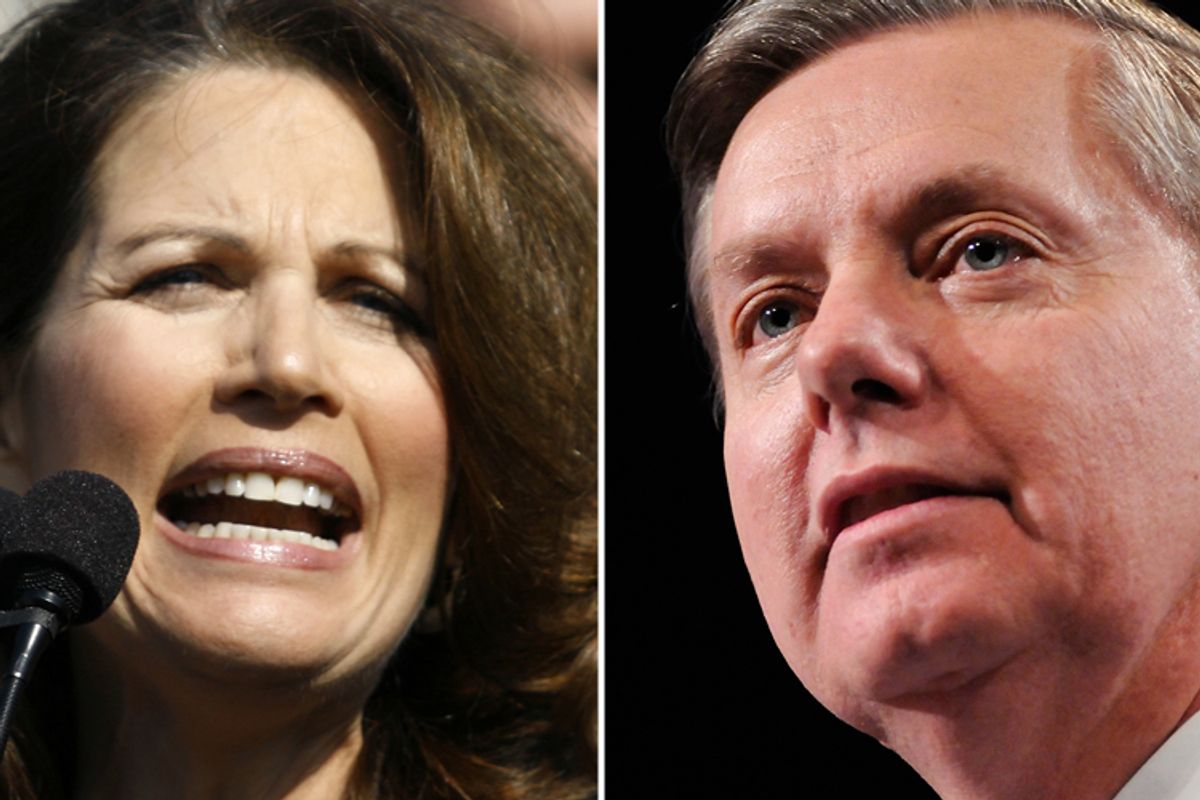 There isn't a lot, besides girl names, that Lindsey Graham and Michele Bachmann have in common. But one thing they apparently share is a deeply held conviction that "earmarks" are a bad thing, while appropriating funds for important projects in their home districts is a vital and necessary thing that the government should be doing.

Bachmann, as proto-Tea Partier, has been against a vocal opponent of earmarks since that became a popular thing for Republicans to be against -- but get real, but St. Cloud's small buses aren't going to replace themselves!

The hypocrisy has been noted before, but the Minneapolis Star Tribune finally called on Bachmann to explain it. She helpfully fuzzied up our basic grasp of the terms in question, because like most contemporary elected Republicans, she is a post-structuralist.

Bachmann told the Star Tribune she supports a “redefinition” of what an earmark is, because, she said: “Advocating for transportation projects for ones district in my mind does not equate to an earmark.”

“I don’t believe that building roads and bridges and interchanges should be considered an earmark,” Bachmann said. “There’s a big difference between funding a tea pot museum and a bridge over a vital waterway.”

I dunno, Michele. Does Congress really need to pay for Cedar Creek Drive to cross Rum River when you can just drive a couple minutes up to Viking Boulevard? Is that what the Founders would've wanted?

Senator Lindsey Graham, the Messina to John McCain's Loggins, has now signed on to the Senate earmark "moratorium," because he'd really, really like to remain in the Senate as long as possible. But he, too, seems to be exploding the terms "earmarks" and "moratorium."

I respect the spirit in which this moratorium has been agreed to and hope it will lead to a better use of taxpayer dollars. However, I maintain the right to seek funding to protect our national security or where the jobs and economy of South Carolina are at risk. If the Obama Administration and their bureaucrats in the federal agencies take action against the best interests of South Carolina, I will take swift action to correct their wrongs.

Back home, Graham's constituents would really just like a measly $400,000 to "study the feasibility of deepening the Charleston harbor," and I am guessing that it will turn out that that project is vitally important to national security and also it won't count as an earmark.