Why anyone claiming to be a fiscal conservative is probably wrong

In common usage today, the term has two meanings -- one trivial, the other misleading 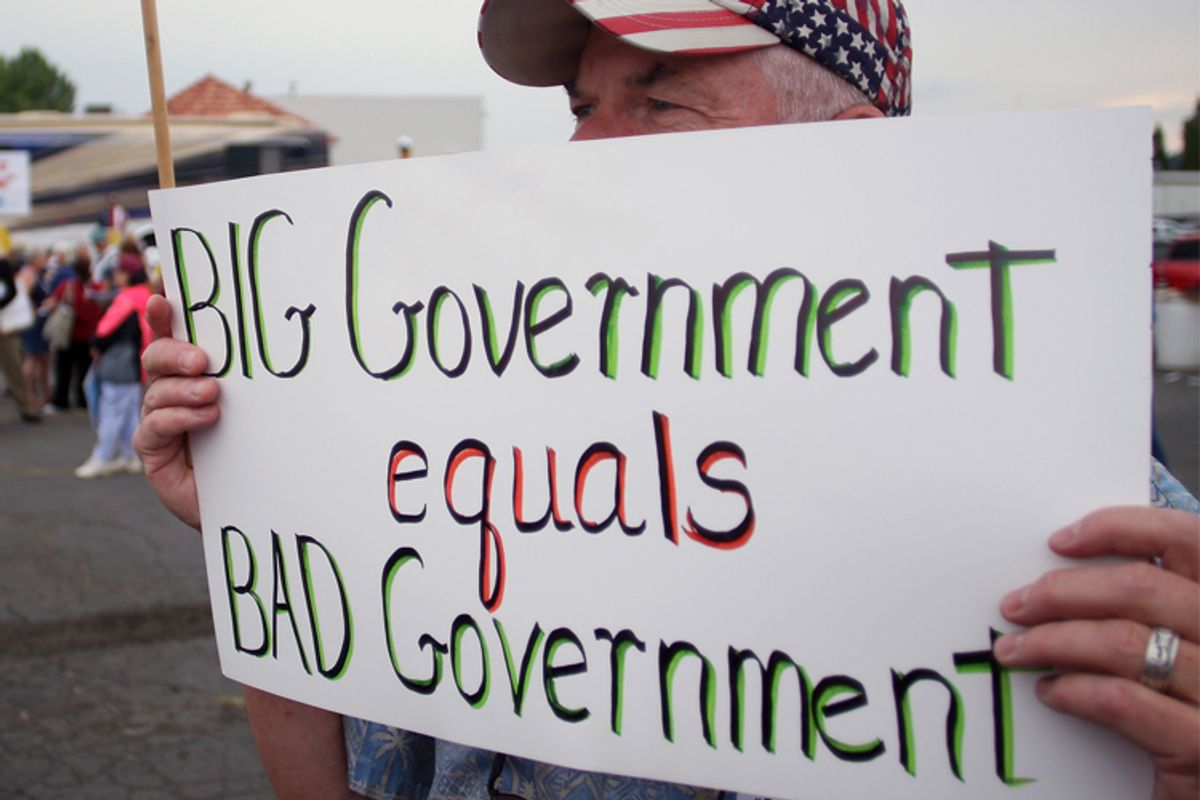 In spite of the controversy that has followed the hasty release of their plan for the federal budget by Alan Simpson and Erskine Bowles, the co-chairmen of the president’s commission on the deficit, the way that the discussion of the federal budget is framed has generally gone unquestioned. According to the conventional narrative, there are three positions on the political spectrum, with conservatives and progressives at opposite ends and "fiscal conservatives" in the middle. "Fiscal conservatives" not only pose as centrists beyond the extremes of left and right, but also claim to be the only people in the country in favor of "fiscal responsibility."

There’s just one problem. There is no such thing as "fiscal conservatism."

Let us begin with the trivial definition. If "fiscal conservatism" means nothing more than a belief that all federal spending should be paid for sooner or later, then practically every possible position on every debate is "fiscally conservative." Keynesian liberals can claim that they are "fiscal conservatives," because money borrowed by the government to boost demand during a crisis will be paid back with interest to creditors in the future. Supply-siders on the right who argue implausibly that deficit-creating tax cuts will pay for themselves by increasing long-term economic growth can also argue that they are "fiscal conservatives," if the time horizon is decades or generations, not the next few years. The category would include libertarians who would like government at all levels to be 10 percent of GDP and social democrats who would not object if it were 50 percent. Assigning people with such radically incompatible priorities and perspectives to the same category of "fiscal conservatives" as long as, in principle, they favor balanced budgets would be a pointless exercise.

Democrats who call themselves "fiscal conservatives" generally give two reasons for their chosen self-description. Some favor a political ideology that combines social liberalism with economic conservatism. They appear to be unaware that such an ideology already exists. It is called libertarianism, and it is represented by the Cato Institute, Reason magazine and the Libertarian Party.

Other Democrats claim that they are both progressive and fiscally conservative because they seek to shrink entitlements for the elderly in order to free resources for investing in children and young people or public goods like infrastructure. For example, in a recent debate with Greg Anrig of the Century Foundation in the journal Democracy, Isabel Sawhill of the Brookings Institution proposed cuts "in the big social-insurance programs, both to reduce the red ink in our future and to finance education, infrastructure, and other priorities that can improve productivity and standards of living."

The devil is in the details. To free up enough resources to invest in universal pre-kindergarten, expanded Head Start and massive new infrastructure projects and to steeply reduce the deficit in the near future, as Sawhill suggests, would require major cuts in Social Security and Medicare for the middle class, not just the rich.

Another problem for this position is that there is no evident method by which any savings from entitlement cuts could be translated into greater discretionary spending on young people and infrastructure. Social Security is funded wholly, and Medicare partly, by payroll taxes, not general revenues. Cutting entitlements would not transfer money into federal coffers to be used for other kinds of spending, unless a portion of payroll taxes were diverted to federal education and infrastructure programs, something that nobody has proposed.

The truth is that there are no genuine progressives who are "fiscal conservatives." Nor are there any genuinely centrist "fiscal conservatives," if by the political center we mean not the center of opinion in corporate boardrooms and the corporate media but the center of opinion in the American electorate, which overwhelmingly supports Social Security and Medicare. The fiscal conservatives identified as such by the media are either conservative Republicans, like David Walker and the billionaire Pete Peterson, who funds much of America’s deficit hawk propaganda out of his own personal fortune, or from the neoliberal wing of the Democratic Party, like Alice Rivlin and Isabel Sawhill. Their unpopular minority view of middle-class entitlements puts all of these "fiscal conservatives," Republicans and Democrats alike, well to the right of center in the United States.

Until recently, it was still possible for journalists to claim that there is a divide in the Republican Party between budget-busting "supply-siders" and budget-balancing "fiscal conservatives." But the "fiscal conservatism" of Paul Ryan, who is expected to chair the House Budget Committee in the new Republican-majority House, is indistinguishable from what the economist Bruce Bartlett calls orthodox "starve-the-beast" supply-side conservatism. And by proposing further tax cuts for the rich, cuts in Social Security for the middle class and the reduction of government to a share of GDP smaller than it had under Ronald Reagan, Erskine Bowles and Alan Simpson have destroyed any residual distinction between "fiscal conservatism" and plain old right-wing economics.

Conservatives have a right to their views. But their minority position on entitlements should not be over-represented in public debate. It is dishonest for the same minority to pretend to represent two-thirds of the political spectrum, with a similar agenda championed both by economic conservatives who are openly on the right and by "fiscal conservatives" who pretend to be centrists. This political and intellectual reflagging operation should fool nobody. Economic conservatives in both parties should have the courage and honesty to appear in public under their true colors, rather than under the false flag of centrism. It is time for the weasel words "fiscal conservatism" to be dropped from public discourse altogether.