Should I quit watching football for my kids?

As a kid I was thrilled by the violence and excitement of the big game. How come as a parent I'm so horrified? 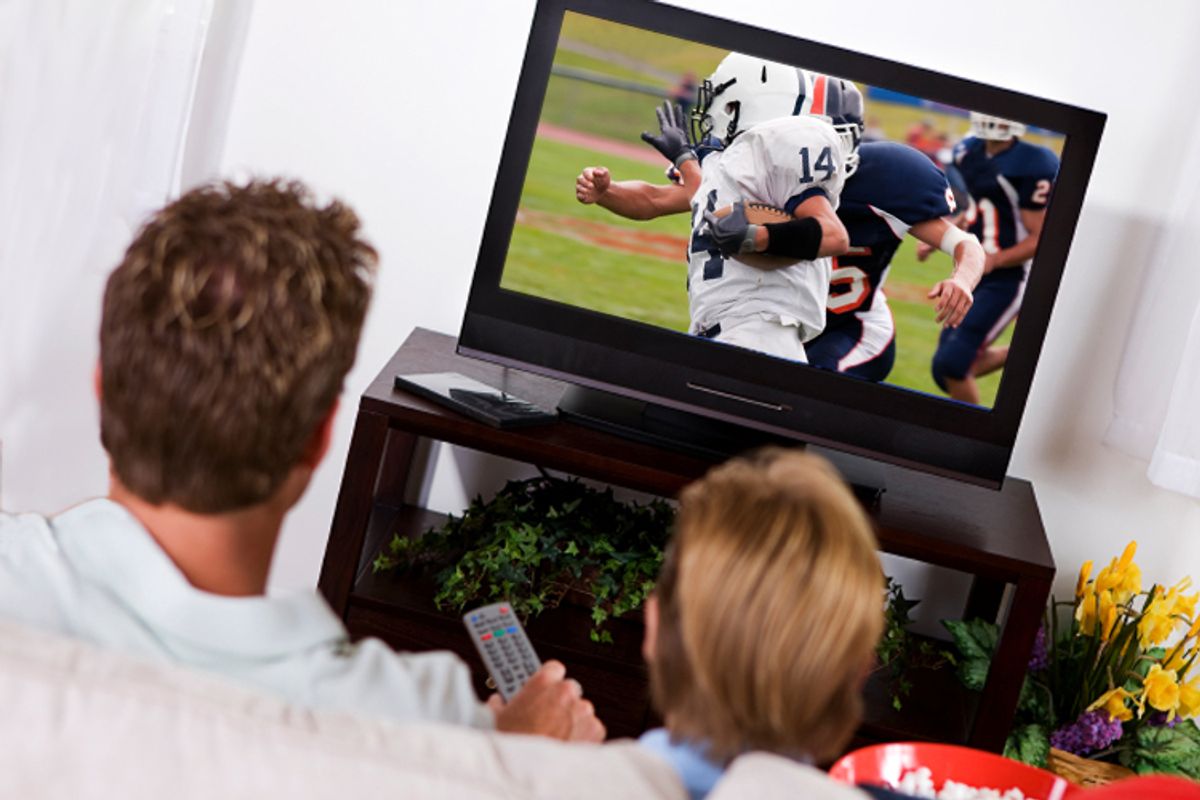 For me football started before memory, lying on my father's chest as an infant, listening to his heartbeat as he watched games on TV. In my first 14 years, football was about my dad, about my grandfathers, and about my friends on the playground. It was about quarterbacks and receivers, fast running backs and the Buffalo Bills, about hope and victory and deflating defeat.

It was not about hitting.

That changed in high school. I got to know the adrenaline kick of the big hit, the crushing block. I discovered that coming down on a linebacker feels good, the blind side trap block feels good, the unblocked shot on the running back feels oh so good.

I felt solid, there, present, when I hit or even got hit. (I still salute the guy in college who chipped four of my teeth with one clean block.) It was as Zen as I got back then, in the flow of a game, in the last minutes of the fourth quarter when I had worn down my opponent and started to take control hit by hit by hit. I didn't even care -- much -- that I blew out both my knees, doomed to a life of knee braces and no jogging.

But I don't want to get too fancy. It was, above all, fun.

I bought NFL hits videos and watched them Saturday mornings before games, the parade of gridiron commandos taking me to another, hopefully more aggressive, place. I was not the best social fit on a football team, and I hated practice. Yet I yearned for Saturday, to be in the locker room psyching myself up with mix tapes or Guns N' Roses, then singing the national anthem and running down the field looking for someone to pop.

The ambivalence surfaced almost immediately after I stopped playing. After college I spent three years working in the land-mine-littered wreckage of a Balkan war, and adrenaline and machismo and sports as war metaphors don't seem so cool when you spend your days surrounded by old people with haunted eyes who tell you about how a grenade cut their daughter into pieces.

Still, that was me at night, balancing on one leg in the frigid Balkan winter, trying vainly to catch NFL games on a short-wave radio over the American Forces Network from Bosnia, telling myself that it was just a game, a harmless game.

I even had a football speech I gave, a justification for working in a peace project but loving a violent game. I don't think the Polish activists, English anarchists and Croatian war veterans cared much, but I still felt the need to whip up a narrative about how football provided a sense of community, how it reflected our nation of immigrants and was even, yes, a safe substitute for war.

Three years later, after I came home, living outside New York City, I watched on TV as the airplanes flew into the twin towers on Sept. 11, 2001. I was a newspaper reporter, and I spent the next months covering funerals for firefighters and office workers, interviewing survivors and those left behind, again surrounded by all these people with either sad or panicked eyes.

By then, the violence was all out of me, replaced by melancholy, by this intimate knowledge of what comes after the Big Hit.

Still, I watched, a lonely single guy in the exurbs, driving to my parents' house on Sundays for long hours on the couch, dozing and watching until the big dinner, telling myself that it was just a game, a harmless game.

Then I met my wife-to-be, and I moved to Sweden then back to New York then back to Sweden. My daughter was born in that flurry, and when she was 2, we took her with my parents to watch the Buffalo Bills play the Arizona Cardinals in Phoenix.

Early in that game, Adrian Wilson laid out Bills quarterback Trent Edwards in the most brutal hit I've seen in person. Edwards left the game with a concussion, and Wilson got fined $25,000, though no penalty was called. There are those who say that hit ruined not just the Bills' game (they got crushed), but also the Bills' season (they lost almost every game from that point on), and, most important, Trent Edwards' career.

Edwards came back in a few weeks, but he's never been the same. I have no idea if that hit is the reason -- some say he simply was never very good -- but that hit stuck with me in a way no other had.

My daughter did not notice Wilson pile-driving Edwards to the ground. She was fascinated by the big red Cardinals mascot, by the blaring music and all the cheering. We have a beautiful video of her after the game lost in a dance by a loudspeaker in the parking lot.

Would Wilson's hit have made me pause if my daughter was not there? I do not know. I want to say yes. But I doubt it.

And still I watched, an expat now, hanging on to American football as a safety net, as a comfort of home, telling myself, even if I didn't quite believe it anymore, that it was just a game, a harmless game.

Then last year seemingly troubled Cincinnati Bengals wide receiver Chris Henry fell out of a pickup truck and died. His autopsy showed a form of degenerative brain damage caused by multiple hits to the head. More recently, University of Pennsylvania linebacker Owen Thomas suddenly committed suicide, and his brain scan was scary too.

Then a few weeks back, the NFL weekend got especially brutal -- player after player crumpled by especially violent hits. Then I read stories comparing football to boxing in the most unflattering way possible and about how the simple day-to-day hitting of high school practice could cause brain damage in teenage boys.

The players -- at least the healthy young ones -- dismiss the troubles, even mocking them. But each story deepened my sense of shame. This was not cartoon violence. There are consequences. There is also fear now, just a slight fear. What would my brain scan show? Will I start to slur my words someday because I played small college football?

No, I'll let my children make their own decisions about that. I'm the father who lets his kids wander all over the park, out of sight. I let them push their limits, I let them get hurt if they go too far. They're 4 and almost 2 now, and I do not want them to grow up afraid or sheltered. I want my children to grow up strong enough to handle the inevitable darkness of life.

But I might not believe in the game anymore. Maybe football is a more dangerous sport than I ever wanted to believe, and I honestly wonder whether the game has gone from slightly edgy to distasteful spectacle. We do draw lines, all of us.

Yet there is more. My wife says that since our daughter was born four years ago, my risk-awareness has changed, my sense of mortality -- for me and for my family -- has deepened. And my moral code is suddenly more consistent. I just can't tell them to do one thing and go do another at night.

Honestly? I don't always like it. I want to watch. The game remains intertwined in the fabric of my life. I still get in a stance and pretend to tackle my giggling son. I beam when my daughter tries on Grandpa's football helmet or when she snuggles under a blanket with her cousin to watch a game on Christmas. Can I extract all that from the violence? It seems like a denial of myself to give it all up, a rejection of that baby sleeping on his father's chest.

Still, I cringe when I used to cheer. I watch less and less. I read less and less about the games. No more fantasy football for me.

I avoid making any final decision. The NFL is on at night here in Europe, after my kids have gone to bed. I watched on Sunday, trying to focus only on the fast running backs, the quarterbacks and wide receivers, just like those first years.

But sometimes the night games in America are still on when my children get up in the morning, and we have watched the end of some games together.

And this past Monday morning, my now 21-month-old son pointed at the big box and said, "TV ... football."

Nathan Hegedus writes the Big News column for the Faster Times and also blogs at Dispatches From Daddyland.