On tap for the GOP in '12: Unpredictability

Think Mitt Romney will win because it's his turn? Guess again 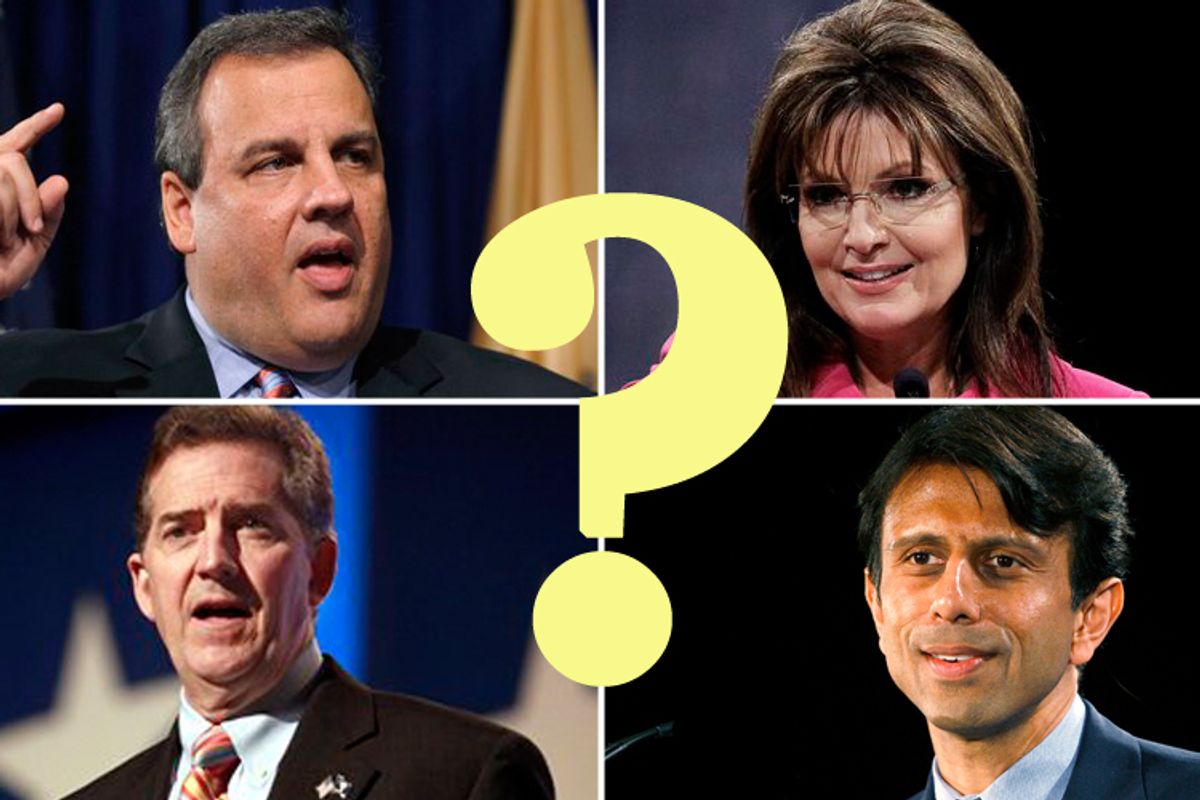 On Monday afternoon, the National Review's Kathryn Jean Lopez, while taking in a presentation from Scott Rasmussen on her publication's annual fundraising cruise, tweeted the following summary of the pollster's take on the GOP White House race:

rasmussen predicts gop nominee in 2012 won't be palin, romney, pawlenty, huckabee. adds that it won't b newt or mccain(!) either

Granted, it's hard to tell exactly how serious Rasmussen was being; the inclusion of the 74-year-old McCain, who is on no one's '12 radar, suggests he might have been having a little fun.

But let's take his basic argument at face value. The notion that Republicans will nominate someone other than Sarah Palin, Mitt Romney, Mike Huckabee and (to a much lesser extent) Newt Gingrich -- the four prospects who typically lead in polls now -- might seem jarring; after all, we're accustomed to hearing that the GOP habitually nominates the next-in-line candidate. But the closer you look at the mood of today's GOP electorate and the field that's taking shape, the more sense Rasmussen's point begins to make.

Basically, there are three reasons for this.

The first, as Jonathan Bernstein noted on Monday, is that the "next in line" conventional wisdom isn't all it's cracked up to be. True, next-in-liners have won GOP nominations in 1980, 1988, 1996 and (sort of, and in a very backward way) 2008. But it's also true, for instance, that George W. Bush didn't begin the 2000 cycle as the GOP's heir apparent -- and by the summer of 1999 he'd shoved Dan Quayle, Lamar Alexander, Steve Forbes and Pat Buchanan (all of whom had some claim to the next-in-line mantle) aside to become the overwhelming front-runner. Don't forget, too, that next-in-liner Bob Dole came a few thousand votes from ending his campaign after the 1996 New Hampshire primary; when initial returns showed Dole -- who had already achieved a narrow, underwhelming victory in Iowa the week before -- running third behind both Buchanan and Alexander, he told his aides he'd drop out if the results held. But Dole ended up catching Alexander for second, and that made all the difference: After New Hampshire, the GOP establishment and even much of the conservative activist establishment -- terrified at the prospect of a Buchanan nomination -- rallied to Dole. Had he knocked Dole out in New Hampshire, Alexander would likely have inherited this support.

Next-in-line status, then, isn't as imposing as it seems, meaning that Romney and Huckabee -- the two '12 prospects who could plausibly claim it -- may not enjoy the built-in advantages many commonly assume they have.

Then, there's the mood of the Republican primary electorate. That the GOP base is frothing with anger at a Democrat in the White House and his colleagues on Capitol Hill is nothing new; this same mood prevailed in the run-up to '96, when Bill Clinton was in power, and it was there when Jimmy Carter was president too. It's just how the right responds to the presence of a Democratic president.

What is new, though, is that the conservative base is just as angry with and distrustful of the Republican Party establishment -- a consequence of the heavy spending and pricey bailouts that marked the Bush years. This mood expressed itself in the stunning success Tea Party candidates like Sharron Angle, Christine O'Donnell and Joe Miller enjoyed against establishment Republicans this year. Conservatives today are just as eager to purify the GOP as they are to flush Democrats from power. A significant chunk of the GOP base seems fine with nominating an unelectable candidate, as long as it means taking out a RINO. This puts Romney, in particular, in a tough spot. Conservatives have long wondered whether he's really one of them, and he reeks of the establishment Republicanism they are now rebelling against. On paper, he's the safest general election bet for the party, but he also seems woefully ill-suited to survive the extreme ideological scrutiny that the GOP base will apply to the '12 field.

The Republican base hasn't been at war with its establishment like this since the late 1970s, when the New Right -- emboldened by Reagan's 1976 primary campaign against Gerald Ford and enraged that so many Republicans sold them out on the Panama Canal Treaty -- sought to marginalize the Rockefeller wing for good. Back then, the New Right had an obvious presidential candidate to rally around: Reagan, who never stopped running after nearly beating Ford. Reagan also happened to be the next-in-line guy, too.

This brings us to the third major reason to believe a genuine dark horse can win the Republican nod: This time around, the GOP's Tea Party base doesn't have a Reagan. Palin and Huckabee may fit the Reagan mold the best, but neither of them seems likely to corral the right the way Reagan did heading into the '80 primaries. Recall that in '80, Reagan left no room to his right for a challenger; conservative Rep. Phil Crane tried to out-conservative him, but it was futile. (The only space was to Reagan's left, with George H.W. Bush running as the fading Rockefeller crowd's candidate.)

The ingredients, at least potentially, are in place for someone to swoop in from outside the top tier and claim the GOP nomination. The party's base has never been more intent on rejecting candidates with strong establishment credentials, but -- unlike the last time the base was in this mood -- no one candidate is positioned to run as "the Tea Party's candidate." Multiple candidates have potential claims to this status; there is an opening for one of them to capture the interest of the right's most influential leaders and to move up in polling -- quickly. I've been particularly intrigued with Chris Christie, the charismatic New Jersey governor who has generated considerable buzz, but John Thune or Haley Barbour could just as easily catch on. Or maybe Huckabee will flourish. Or ... someone else. In primary after primary this year, we saw how quickly support for "inevitable" GOP front-runners could melt away if Tea Party leaders and talk radio voices united around an insurgent candidate. Frustration with the party establishment is so strong that the GOP base could be coaxed into making decisions it wouldn't have made in past election years. That same dynamic could very easily prevail in 2012.