White Democrats want to stifle ambitious African- Americans. Or they're intimidated by them. Make up your mind, man 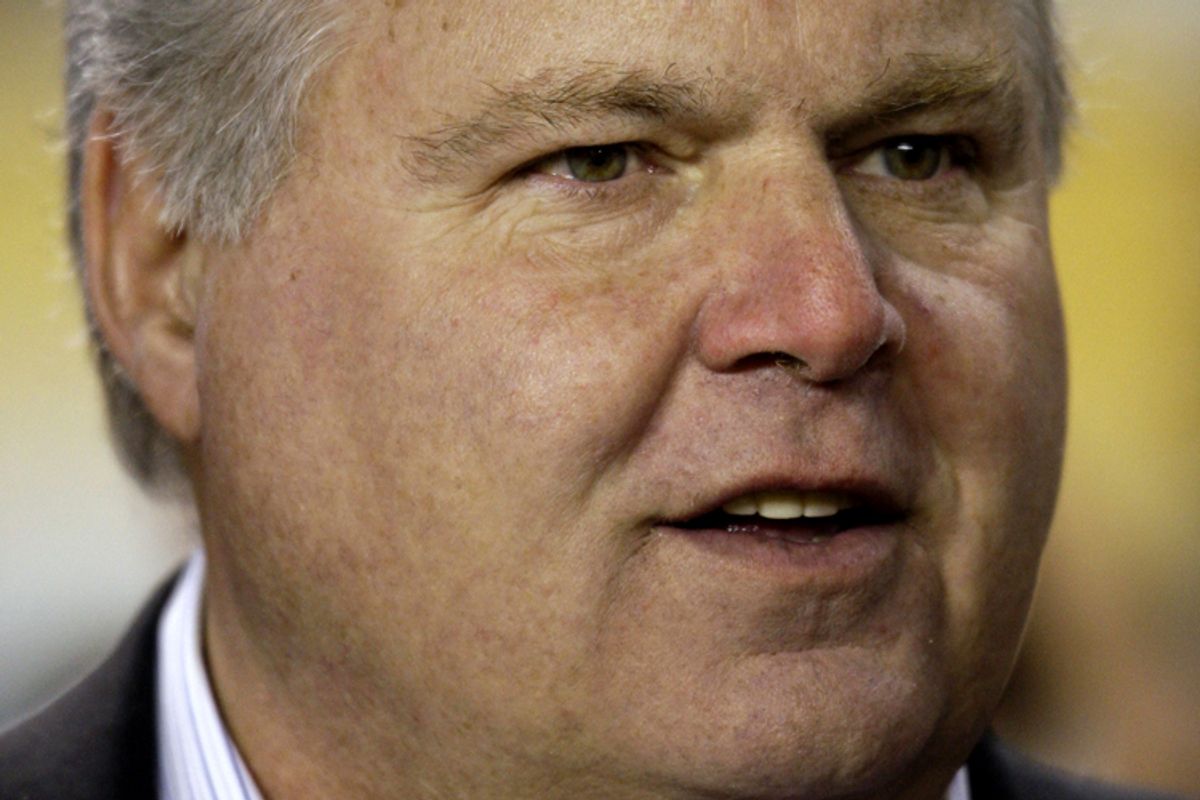 You've probably heard by now about Rush Limbaugh's campaign against the "racist Democrats" in the U.S. House who, in his telling, have conspired to keep Rep. James Clyburn, a former chairman of the Congressional Black Caucus and the current third-ranking member of the party's leadership, from claiming the Democrats' No. 2 slot in the next Congress.

Last week, it appeared that Clyburn would be running against Steny Hoyer, who has been the House majority leader since 2007, for minority whip, which will be the second-ranking slot on the Democratic side come January. Hoyer was overwhelmingly favored to win, mainly because he's carved out a bigger power base within the House, the result of his near-miss campaign against Nancy Pelosi back in 2001 and his successful effort to beat back a challenge from a Pelosi-backed candidate in 2006. Simply put, Hoyer has a lot more allies in the Democratic caucus than Clyburn, and he already outranked him to begin with, so it was hardly surprising that he was positioned to defeat Clyburn in a race for whip.

But, not surprisingly, this explanation was unsatisfactory for Limbaugh, who delights in pretending that the modern GOP -- an overwhelmingly white party that owes its strength to decades of growth in the South, a result of its 1964 decision to reject the Civil Rights Act -- is a beacon of racial enlightenment. Thus, Rush told his listeners last Thursday that the "rich, white" Hoyer and his allies were trying to force Clyburn "to go to the back of the bus."

"Clyburn has had power, but they want to take it away from him here ... Clyburn starts to demand respect and all hell seems to break loose in the Democrat Party," Limbaugh declared. He also proposed, as you've certainly heard, that Clyburn instead be given a position "Driving Miss Nancy."

Shortly thereafter, a compromise was struck: Pelosi, who is staying on as the Democrats' House leader, created a new leadership position -- assistant leader -- for Clyburn, who then withdrew from the whips' race. The new position will be the No. 3 slot on the Democratic side, allowing Clyburn to retain his current rank. In reality, there's nothing new about a deal like this. In 2006, Senate Democratic leader Harry Reid invented a third leadership position -- vice chairman of the Democratic conference -- as a way of placating Chuck Schumer, who had just overseen the party's successful campaign to win back the chamber. But Rush prefers to portray the Clyburn issue in explicitly racial terms, telling his listeners on Monday:

[W]e've been told to believe that what happens in situations like this, Democrats just lay down, if the black guy wants the job he should get it because they've authored such legislation, affirmative action, it's only fair, they've been denied all these opportunities by rich white guys. But when the rich white guy's a Democrat somehow that all goes out the window.

What's most amusing about this view, of course, is that the "Democrat Party" that Limbaugh claims is dedicated to stifling the ambitions of black members is the same party that nominated a black presidential candidate in 2008. (Don't forget, too, that Barack Obama's victory over Hillary Clinton was only possible because superdelegates -- that is, powerful party insiders, many of them very rich and very white -- resisted the Clinton crowd's efforts to paint Obama as a risky fall candidate and insisted that he be nominated.)

It's also worth remembering that Rush's racial paranoia works the other way, too. Back in 2006, when national party leaders prodded a white Democrat named Paul Hackett to end his campaign for the Democratic Senate nomination in Ohio, Limbaugh told listeners that "there's a racial component here."  Why? Because, Rush  claimed, Hackett was being pushed aside in favor of Rep. Sherrod Brown -- "and don't forget, Sherrod Brown is black." Except Brown wasn't black. There was absolutely no racial component.