Looking to tweak tradition? Once your guests try this creamy pumpkin risotto, they'll forget about the turkey 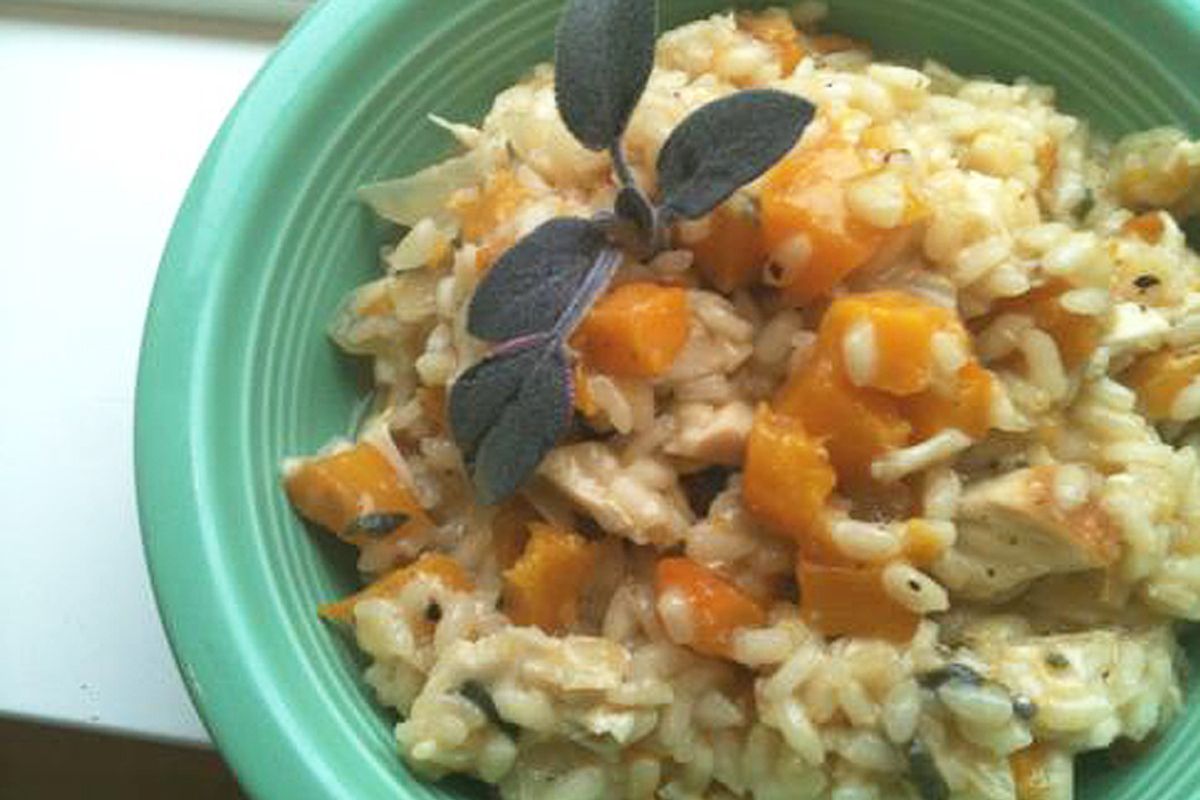 Thanksgiving dinner is a war zone of traditional expectations. You know this conversation:

"I think I'll add blue cheese and roasted garlic to the mashed potatoes this year."

"This is me, calling an attorney."

There's nothing wrong with mashed potatoes as a carrier for butter and sour cream. Really, I'm all for it, but Thanksgiving without deviation ad infinitum is ad nauseam, and just plain tragic.

It took years of careful negotiation with my family to reach a compromise. Certain items must always appear in their pristine form (mashed potatoes, candied yams, roast turkey, stuffing, rolls, jellied cranberry from a can), but I get to add a couple of interesting dishes to the mix.

I did score one other, critical win many years ago. There was a time when something called "7-Up Salad" appeared, like clockwork orange, at every Thanksgiving dinner. Were we the victims of a marketing ploy, doomed to product placement by a pimply kid who saved his ass with a nascent notion of the "big idea"? We'll never know, but my husband cajoled someone in the family every year to make this "salad" and it passed from hand to hand around the table without a trace of irony or disgust.

Context: It is a green gelatin mold in which floats, like a stop-action horror film, canned pineapple chunks, walnuts and mini-marshmallows. Oh, and it's fizzy, owing to its namesake liquid. Eventually I prevailed against this food felony, which has not shown itself at my table in more than a decade.

One small step for me, a giant damn leap for Thanksgiving dinner.

This year, because I defer to the Italians on most everything, pumpkin risotto will get its star turn. I know, risotto and mashed potatoes on the same table is very nearly a crime against humanity. What can I do?

I tested this recipe a few weeks back, when Halloween handed me pumpkins and I made "pumpkinade," so to speak. Actually, this recipe also includes sage-roasted chicken. Imagine a sage-roasted turkey and pumpkin risotto as the main dish on Thanksgiving -- not at my house, not in this lifetime. But for someone who hasn't used up all her negotiating chits ridding Thanksgiving of 7-Up Salad, perhaps it could happen. A girl can dream.