Slate blogger: "Planes can fly themselves." Here we go again. Plus: Freakonomics blows it on pilot training 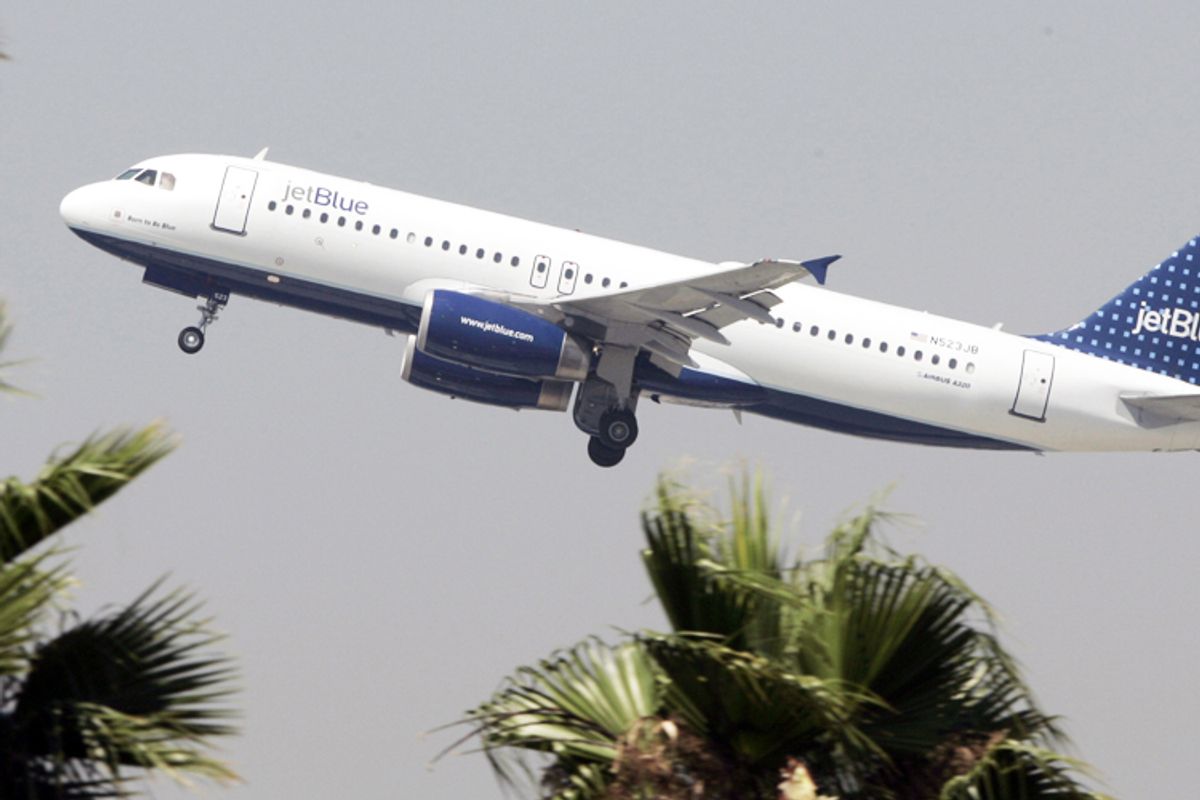 A JetBlue Airbus A320 takes off from Bob Hope Airport in Burbank, Calif.
--

Do I really need to do this?

As regulars of this column are well aware, nothing gets my dander and bad cholesterol up more than hearing ill-informed people echo the idea that modern commercial aircraft are all but completely automated, with pilots on hand merely as a backup. In spite of my rebuttals, this mythology is so widely parroted that it has become accepted wisdom. It may not be the least bit true, but millions of people believe it.

Enter Chadwick Matlin, Slate correspondent, who takes it a step further in the Nov. 12 installment of his "30 Airports in 30 Days" series. As part of a month-long cross-country junket, Matlin gets some playtime in an Airbus A320 simulator, courtesy of JetBlue, and describes the experience like this:

"The most important thing I learned in the simulator: Planes can fly themselves. When autopilot is engaged, human pilots have the best job in the world. They're 30,000 feet high, a computer is doing their job for them, and they can watch DVDs on their laptops. (The A320 cockpit comes with a little laptop stand.)"

The ignorance expressed in this passage is beyond anything I've encountered in a long time. In my letters to Matlin and the editors at Slate (thus far unanswered), I did my best to rein in my temper, turning instead to one of my most reliable and, I think, useful analogies: High-tech cockpit equipment assists pilots in the way that high-tech medical equipment assists doctors. It has vastly improved their capabilities as professionals, but it by no means degrades the experience and skill required to perform at that level, and has not come remotely close to rendering them redundant. Thus, modern commercial airplanes can "fly themselves" about as much as the modern operating room can perform a surgical procedure "by itself."

And Matlin's assertion that pilots "can watch DVDs on their laptops" is at best juvenile and at worst journalistically reckless. You can snark -- and you will -- remembering last year's Northwest Airlines incident over Minneapolis (which actually was a little more complicated than two lazy pilots nodding off in front of their computers), but for the record, no, pilots do not sit in the cockpit watching movies. Believe me, such activities are strictly prohibited.

Not every moment in a cockpit is busy, it's true. Longer flights often contain extended periods of low workload. But there are also periods of very high workload. Duties come and go; the workload ebbs and flows. But whatever is going on up there, it does not involve DVDs.

The "little laptop stand" the author speaks of is actually a multiuse table installed on Airbus aircraft with the debut of the A320 back in the late 1980s. These planes do not have the traditional, center-mounted control column; a desktop-style table is placed there instead. Some carriers have adapted this table for laptops, but not for leisure use.

"Primarily they are used on the ground for mass and balance calculations, and for determining takeoff speeds," says David English, an A320 captain for a major U.S. airline.  "In flight they are used to check landing distance performance. They also contain all the company manuals, allowing pilots to quickly search for, say, the rules for seeing-eye dogs or the customs procedures in Cancun. They are not authorized for entertainment purposes in flight."

Chadwick Matlin also wants us to believe that landing an Airbus A320 is so easy that even ... well, let's let him explain it: "Even I -- an uncoordinated, easily overwhelmed, neurotic little man -- figured out how to take off and land twice without killing any imaginary passengers."

That's taking public self-effacement to a new and uncomfortable level, but getting to the point: No, I'm sorry, what you did was take off and land in a simulator, under close tutelage, in what I am sure were contrived, best-case conditions.

Stick a non-pilot next to me in a simulator and, sure, there's a reasonable chance I can talk him down to a casualty-free landing. Just the way -- going back to my medical analogy -- that a doctor could perhaps talk a novice through the critical moments of an appendectomy. Not all the time, but some of the time, given the right candidate and a controlled scenario. It'd be fun, maybe, but to be clear, it doesn't make you a surgeon and it certainly doesn't imply you could succeed on your own. (On his or her own, the average non-pilot has exactly zero percent chance of getting a jetliner safely on the ground.)

And by the way, when you watch Matlin's video, you'll hear an alarm in the background calling out, "Sink rate, sink rate." That's a GPWS (Ground Proximity Warning System) call-out requiring an immediate go-around due to an unstable descent. Matlin keeps going, but a real pilot wouldn't have that option.

"It's rare I get to play with a $12 million toy," says Matlin of his experience. "But because I'm a journalist, JetBlue has invited me to do just that ..."

Ignoring for a moment whether the words "because I'm a journalist" are a red flag in anybody's story, at least he admits that he was playing. Unfortunately, he didn't take his reporting very seriously either.

As for the rest of "30 Airports in 30 Days," well, I came away less than moved. In a lot of ways it's a shameless, five-screen advertisement for JetBlue. But really, the whole premise is sort of pathetic and depressing. Here's a kid hungry for a cathartic, month-long adventure after losing his job and his girlfriend. Of all the places in the world he could have gone, and all the things he could have done, he opts to spend four weeks riding around the country, on JetBlue? Never mind that "Terminal Man," over at Wired magazine, had already done this and blogged about it.

And for the sake of novelty, if that's what this was about, I challenge anybody to this version.

But worst of all, maybe, is Matlin's description of JetBlue's new Terminal 5 at JFK. This overhyped building has to be one of the ugliest and most disappointing major airport projects of the past 20 years. He calls it, a "glamorous monument to modern-day air travel."

Next on my take-down list is Dan Hamermesh, economist, University of Texas professor and guest columnist for the New York Times' popular Freakonomics blog.

On Nov. 2, Hamermesh decided to weigh in on pilot training. His post is titled "Who Pays to Train Pilots?"

"No doubt the airlines would welcome a return to the good old days," Hamermesh writes, "when almost all pilots were former military men whose training costs were paid by taxpayers, which represented a huge indirect subsidy to the airlines."

And with that, it is plainly obvious that Dan Hamermesh does not know the first thing about pilot training.

Whether a pilot is culled from the military or civilian ranks, he or she endures an identical training syllabus once hired by an airline. Same cost, same course.

Candidates do not arrive at a carrier pre-trained as airline pilots. They are hired with a certain amount of flying experience (thousands of flight hours, typically), whether accrued through military or civilian channels, and are then put through an airline's (rigorous) training program, usually lasting several weeks.

Historically, carriers chose a high percentage of military pilots because there were so few civilian pilots who had the requisite minimum amount of qualifying experience. And also because they believed these pilots were more easily trainable (not already trained) to their high standards. This, presumably, would reduce costs by cutting down on the number of candidates who washed out or required additional training -- but only to a small degree.

At the major airlines today, the civilian-military split among new hires is around 50/50 (not that major carriers are actively hiring at the moment). At the regional airlines, around 85 percent of crews are civilian. Neither pilot is "better."

Meanwhile, regarding the proposed higher training standards, Hamermesh says of the airlines, "The companies believe that this will cause pilots' wages to rise (to pay for the increased training costs the pilots must incur) ..." Well, I should hope so. Current starting pay for regional airline pilots is around $20,000 per year and often less. Despite the prospect of higher pay, pilots are not listed among the author's supposed "winners" of the FAA's proposed new hiring standards.

As for raising the minimum to 1,500 hours, this is hardly anything radical. It is only very recently that new hires began joining regional carriers with anything less than that. The proposal would return hiring standards to historical norms. When I was hired as a regional airline first officer in 1990, the typical new hire had from 1,500 to 2,000 hours of flight time, as well as an FAA Airline Transport Pilot certificate.

And wait, we're not done yet. I know from the contents of my in box that many of you caught my quotes in a recent piece published in Reader's Digest. It was called "50 Things Your Pilot Won't Tell You." The list was later picked up by CNN.com and Yahoo!

Talking about the quality of cabin air, I am quoted as saying that one of the reasons for recirculating a portion of the air is that is helps reduce humidity.

Actually one of the reasons cabin air is recirculated is to increase humidity.

That was a stupid thing to say. Except that I didn't say it. I spoke to the reporter about cabin air for a good five minutes, only to have my comments whittled down to a single botched quotation.

To its credit, Reader's Digest says it will run a correction in its next hard-copy issue, and is deleting the sentence from its online version. All well and good, but at this point the story has been out there for several weeks. I've received more than a few insulting e-mails.

Do yourself a favor and don't bother with the rest of the article's bullet -points, too many of which are sensationalist, out-of-context quips seemingly engineered to startle and scare the average passenger. Most outrageous are the assertions that pilots won't inform you about engine failures, and an insinuation that planes are taking off dangerously underfueled.

The fuel thing is a topic I've written about before in this column. Such as here and here.

With the possibility of delays in mind, not all commercial flights depart with as much fuel as the crew would desire, ideally. But the worry isn't about running out of fuel and crashing, it's about having to divert earlier than one might wish. Planes are not taking off in violation of Federal (or ICAO) regulations. On domestic flights in the United States, there must always be enough fuel to reach the intended destination, plus any stipulated alternate airport(s), plus a 45-minute buffer on top of that. (Both the destination and alternate(s) must additionally meet forecast weather and visibility criteria.) This is non-negotiable. International flights follow a slightly different but equally conservative set of rules.