For some Beijingers, the Sino-Soviet split of the 1960s lingers on. But who has time for history? 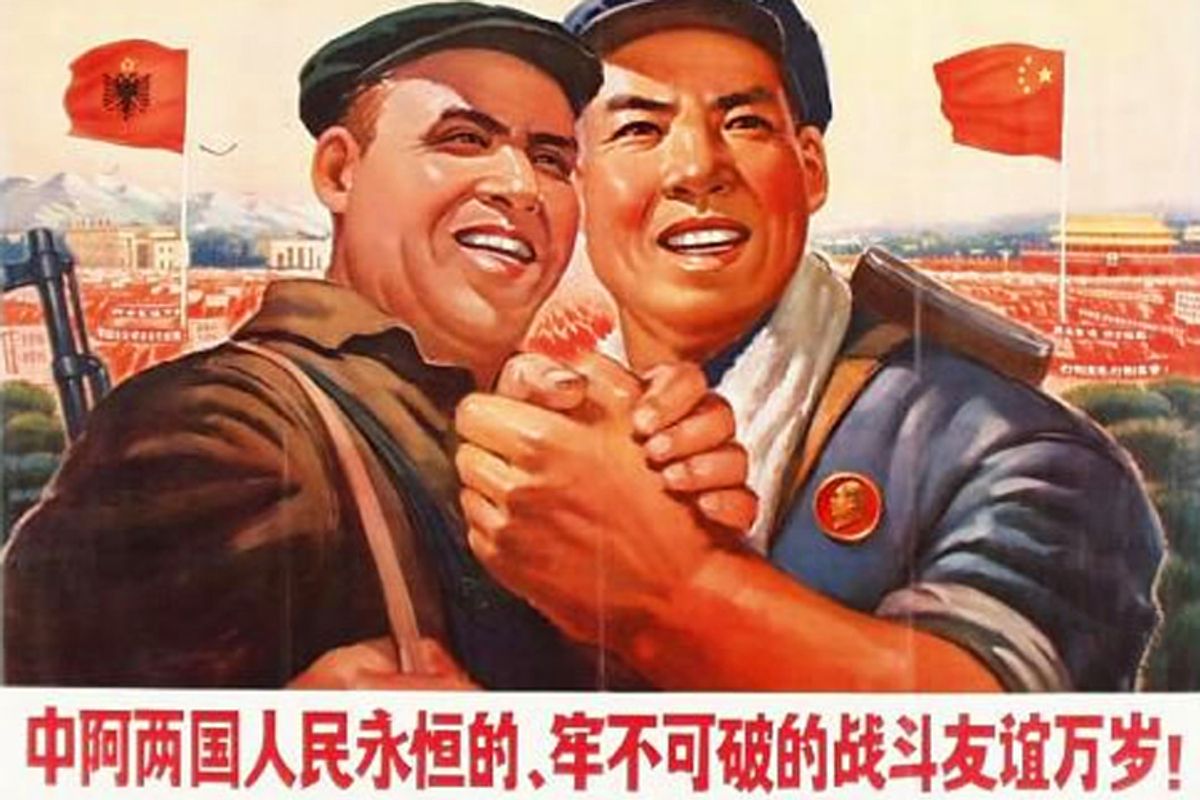 BEIJING -- It's open-mic night at an expat bar called Paddy O'Shea's located in the embassy district in central Beijing. While an American newly arrived to to the country warbles The Stylistics' "You Make Me Feel Brand New" to an appreciative audience, Dionysius, a half-Greek, half-Albanian expat is telling me of his adventures teaching English in China. Dionysius has been stunned to discover that some of the older Beijingers he meets are able to speak a few words of Albanian.

The linguistic surprise is a relic of the virulent Sino-Soviet split of the late early 1960s. Albania was the only European Communist bloc nation to side with the Chinese when Mao broke with his longtime allies. (Among other things, Enver Hoxha, Albania's leader, was upset with Krushchev's wimpy policy of "de-Stalinization.")

In solidarity with their stout Balkan ally, China's leaders sent grain shipments, technical assistance, and apparently encouraged a program of language study. And as Dionysius had discovered, Chinese of a certain age still remembered some of their lessons.

Earlier that evening, our group of journalists had been touring Nan Luo Gu Xiang, an alleyway in eastern Beijing filled with kitschy shops, tourists, and roaming packs of teenagers. If I had already met with Dionysius at that point I would have been tempted to enquire, with my own rusty but encouragingly improving Chinese, as to their level of Albanian fluency, but I'm fairly certain in presuming that these kids were not experts in any Balkan languages. According to local observers, most of them don't know or care a whit about the Tianamen democracy demonstrations, much less the ideological twists and turns of the 1960s.

The so-called "Post-Nineties" generation are unlike anything that has come before them in China. In dress and attitude, in the way they hold their phones and style their hair, they seem more similar to teenagers in Berkeley, Calif. than they do to their own older compatriots.

Every country goes through profound generational change, of course, and teenagers come off as bizarre alien creatures to their wizened forebears no matter what the local history, but in China there's no question that the process of differentiation has been dramatically accelerated by more than three decades of economic growth averaging around 10 percent annually, combined with China's stunning pivot from autarkic socialist self-reliance to open embrace of Western capitalism.

On a very busy Tuesday, my group of journalists met with an economist and a private equity investor who were both veterans of having been "sent down" to the countryside to work in the fields alongside peasants during the ideological upheaval of the Cultural Revolution. Today they could discuss Chicago-school economics or the intricacies of international currency rate disputes with a fluency second to no one, but the memory and experience and backbreaking pain of those years never seems too far from the surface.

But one of China's distinguishing points is that there are multiple generation gaps between the era of the Cultural Revolution and proud Albanian-Chinese solidarity, and the post-Nineties teenagers snarking into their phones. Each decade seems to have its own avatars --- the crushed idealists of Tiananmen and the nose-to-the-grindstone materialists who emerged after the crackdown offer two more examples -- who burst on the scene and then are just as quickly  replaced.

As a foreigner returning to China for the first time in twenty years, it has been all too easy to be caught up in endless comparisons between then and now, but the more impressive insight I'm coming away with is the realization that the changes I can personally benchmark seem likely to be dwarfed by the transformations yet to come. It's almost impossible to imagine what kind of country the post-Nineties and their successors will create -- politically or culturally. 20 years from now, I'm betting, China will be even more different.

The only thing that will remain the same? There will always be an Irish bar where expats can marvel over the amazingness.