Americans may be bored by Prince William's nuptials, but there is one thing we still care about: That big blue rock 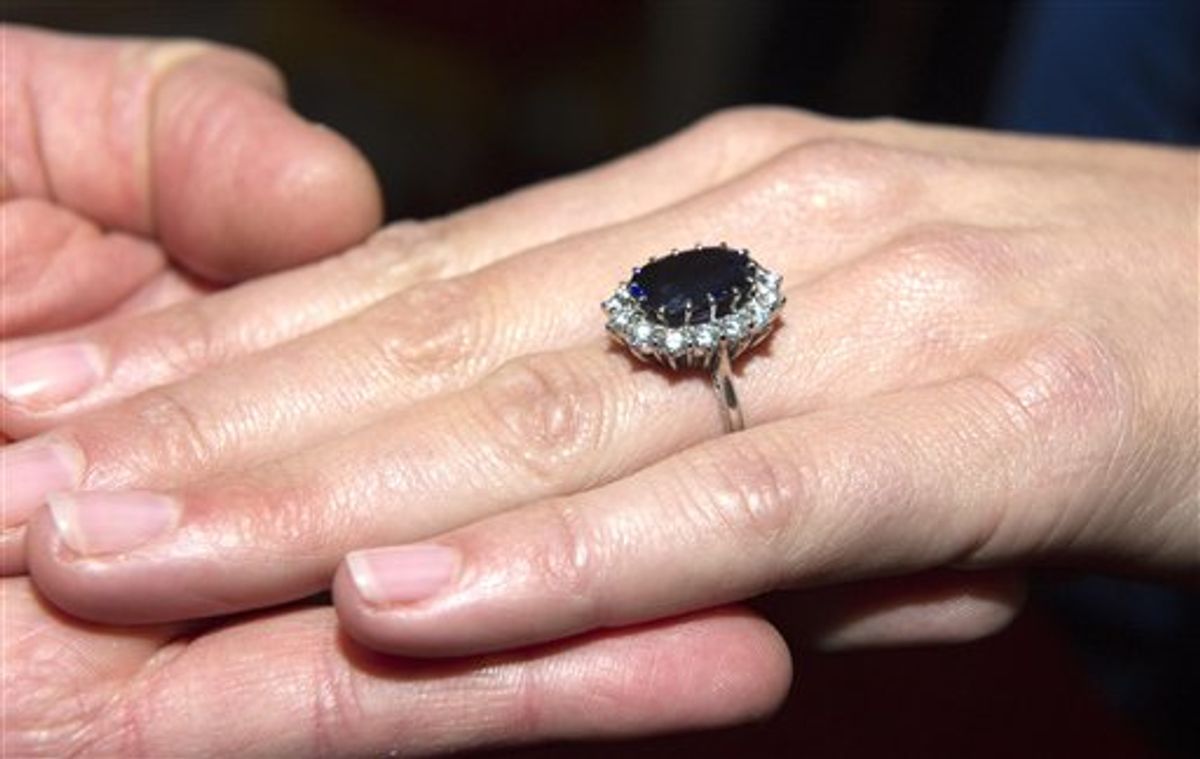 Prince William holds her hand as Kate Middleton wears her engagement ring which once belonged to Diana, Princess of Wales, on the day their engagement was announced in London Tuesday Nov.16, 2010. Prince William revealed that he proposed using the engagement ring of his mother, Diana, Princess of Wales, to make sure Diana "didn't miss out on the excitement". William and his long-term girlfriend got engaged on holiday in Kenya last month and will marry next year. (AP Photo/Arthur Edwards, pool) (AP)
--

Even as the American romance with the royals has faded, there is one aspect of Prince William's engagement to Kate Middleton that still matters, even stateside: the ring. U.S. tabloids are hyperventilating over the hand-me-down from Princess Diana: "The new Diana! William slips mom's ring onto Kate's finger, set to tie Windsor knot," a full-page Daily News headline screamed. The Associated Press reported: "Royals engagement ring fuels NY replica firestorm." (The same thing happened when Diana first showed off the blue sparkler -- which she selected herself from a catalog -- in the early '80s.) Of course, the British press is in an even bigger tizzy: The cover of the Sun was splashed with the headline, "With Mummy's ring I thee wed," and a close-up of Middleton wearing the sapphire-and-diamond cluster and a comparison shot of Diana shortly after her engagement to Prince Charles.

Some suggest that the engagement and wedding will provide the Brits with a major economic boost through tourism and merchandising opportunities. Others are speculating that it will significantly inflate the U.S. bridal industry as well. It's all rather fitting, seeing as engagement rings are strictly an invention of the bridal industry. In a press release, "master bridal consultant" Frank Andonoplas says, "We are all hoping Prince William and the lovely Kate will give our industry a boost. They are young, great looking and charismatic, I think they will be trendsetters." There you have it: Getting hitched is the new black. The Manhattan-based Natural Sapphire Co. is selling "The Princess Diana Ring" for $1,000; its website crashed from a flood of visitors after the announcement. As CEO Michael Arnstein told the AP, "I called my wife and said, 'Honey, I'm not coming home tonight! We're in a frenzy. This is changing our business overnight.'"

Our belief in the royal happily ever after may have weakened, but our belief in the capitalist fairy tale is still strong. Diamonds truly are forever -- even if the marriage isn't. If ever there were a symbol of that, it would be Diana's ring. After all, the Princess of Wales continued to wear the engagement ring even after her marriage was over. These days, you can have your day as a princess -- you can even have your knockoff princess ring -- regardless of whether you have found an everlasting partnership. You can't buy love, but you can buy diamonds -- and on credit. There you have it: modern romance.