As Republicans vow to take them on again, the head of Fox repeatedly compares public radio to the Third Reich 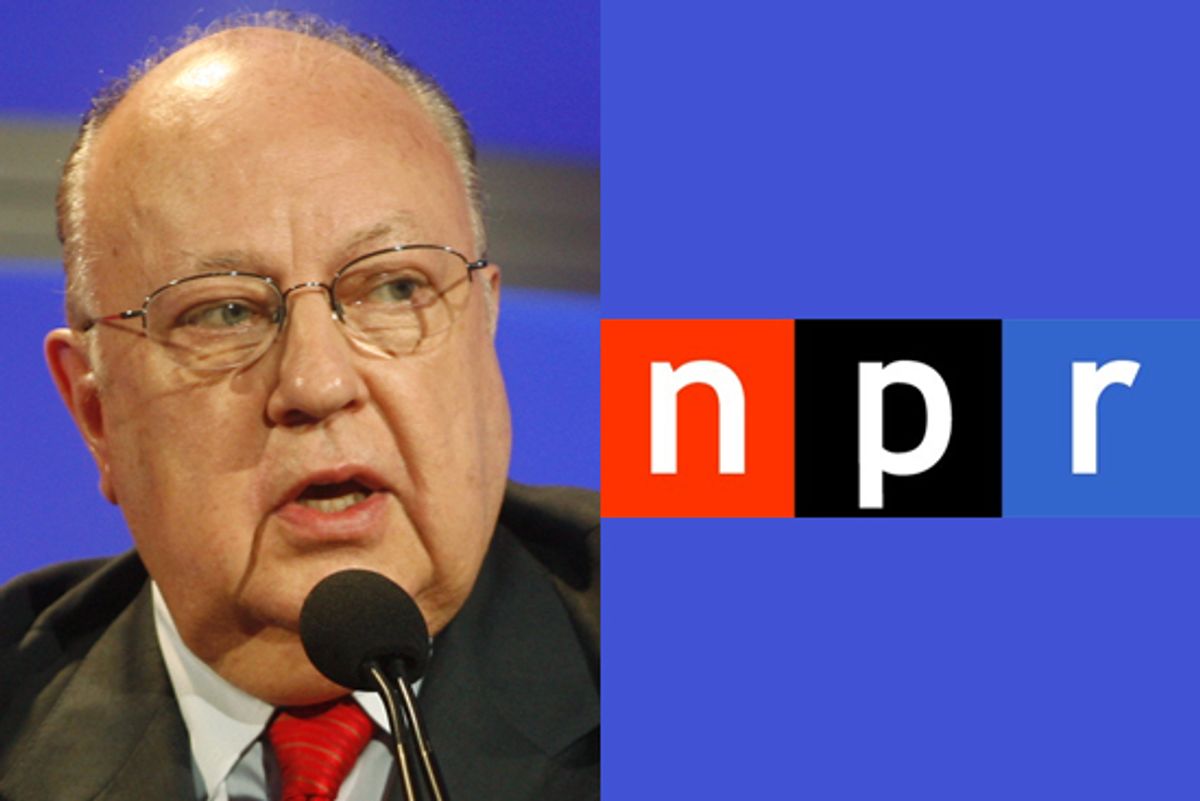 Phew! NPR will not have some minuscule fraction of its budget endangered by angry Republicans. For now. The vote to defund NPR -- which is not really funded by the federal government -- failed in the House of Represenatives 239-171.

But this isn't the end of it! Don't the Democrats know that the midterm elections were a referendum on Nancy Wilson's "Jazz Profiles"?

House Minority Whip Eric Cantor (R., Va.) said the vote demonstrates that Democrats "just don’t get it" and "are still not ready to listen" to the American people after getting thumped on Nov. 2. He suggested that House Republicans will pursue another vote on the matter when the new Congress convenes next year, when the outcome is likely to be different. "If the Democrat majority wants to continue to ignore the will of the people that's their prerogative, but the new Republican majority will not follow suit next year," he said.

Democrats just don't get it. Republicans know the American people want Congress to defund NPR because defunding NPR won an online poll, the modern equivalent of a Constitutional Convention.

Why did it win that silly poll? Because it's a dumb thing that Fox won't shut up about, and that is all the House of Representatives will tackle for the foreseeable future.

Fox hates NPR for cultural reasons -- one strives to present an objective view of world events in as fair a style as possible, while the other one is a media experiment in infusing everything from a relentlessly mindless morning show to a psychotic Bircher's revival show with Republican propaganda (with one hour set aside for car chases and bear sightings) -- but the event that led to the pointless foofaraw was NPR's long-overdue dismissal of official Fox Liberal Juan Williams, who explained that he was scared of "Muslims" in their Muslimy clothes, and then refused to actually apologize when told that that offended his Muslim co-workers at NPR. Fox gave him $2 million to sit around being a symbol of the culture wars.

Rupert Murdoch, Fox's owner, has waged war against public broadcasting in every nation where he has a media presence. (His father, Sir Keith Murdoch, began the campaign by complaining that Australian Broadcasting Corp. -- their BBC -- would be "improper competition" to his newspapers.) His newspapers and his son are currently battling the BBC.

But public broadcasting tends to be popular, so whipping up popular hysteria takes some work -- especially in the U.S., where it's barely public, and it's so ... completely harmless.

Meanwhile, the head of Fox News revealed this week that he's lost his mind and believes all his network's bullshit, in a series of interviews with Howard Kurtz. Roger Ailes said a lot of wonderful things, but this line really hammers home how much this incredibly rich and powerful and successful man hates the very existence of a very popular media outlet not built on rage and resentment:

Then he turned his sights on NPR executives.

"They are, of course, Nazis. They have a kind of Nazi attitude. They are the left wing of Nazism. These guys don't want any other point of view. They don't even feel guilty using tax dollars to spout their propaganda. They are basically Air America with government funding to keep them alive."

Yeah, when I hear Robert Siegel, all I can think is "this guy has a Nazi attitude."

Ailes headed off criticism by writing an amazingly disingenuous letter of non-apology to his good friend, Anti-defamation League head Abe Foxman, in which he bitches about some rabbis who criticized Fox and misstates his own remarks about NPR.

This morning you might be receiving calls because I used the word "Nazi attitudes" to describe the NPR officials who fired Juan Williams. I was of course ad-libbing and should not have chosen that word, but I was angry at the time because of NPR's willingness to censor Juan Williams for not being liberal enough.

Yeah, Roger, you actually said, "They are, of course, Nazis," which I'd argue is a bit more insensitive than the "Nazi attitude" line you followed it with. (And then you called them Nazis again.)

But, yes, instead of apologizing to the people he called Nazis, Ailes sought his official absolution from the man who always explains that offensive conservatives didn't really mean it, Abe Foxman.

I’m writing this just to let you know some background but also to apologize for using "Nazi" when in my now considered opinion "nasty, inflexible bigot" would have worked better. Juan Williams is a good man and like you a friend. And my friends never have to worry about me sticking up for them—even if I’m occasionally politically incorrect I never leave any doubts about my loyalty.

Foxman: "I welcome Roger Ailes apology, which is as sincere as it is heartfelt."

Translation: He's on our side, so we can forgive a little "political incorrectness."