So, Sarah, you think you can beat Barack ...

The half-term Alaska governor makes a boast to Barbara Walters -- but can she back it up in '12? 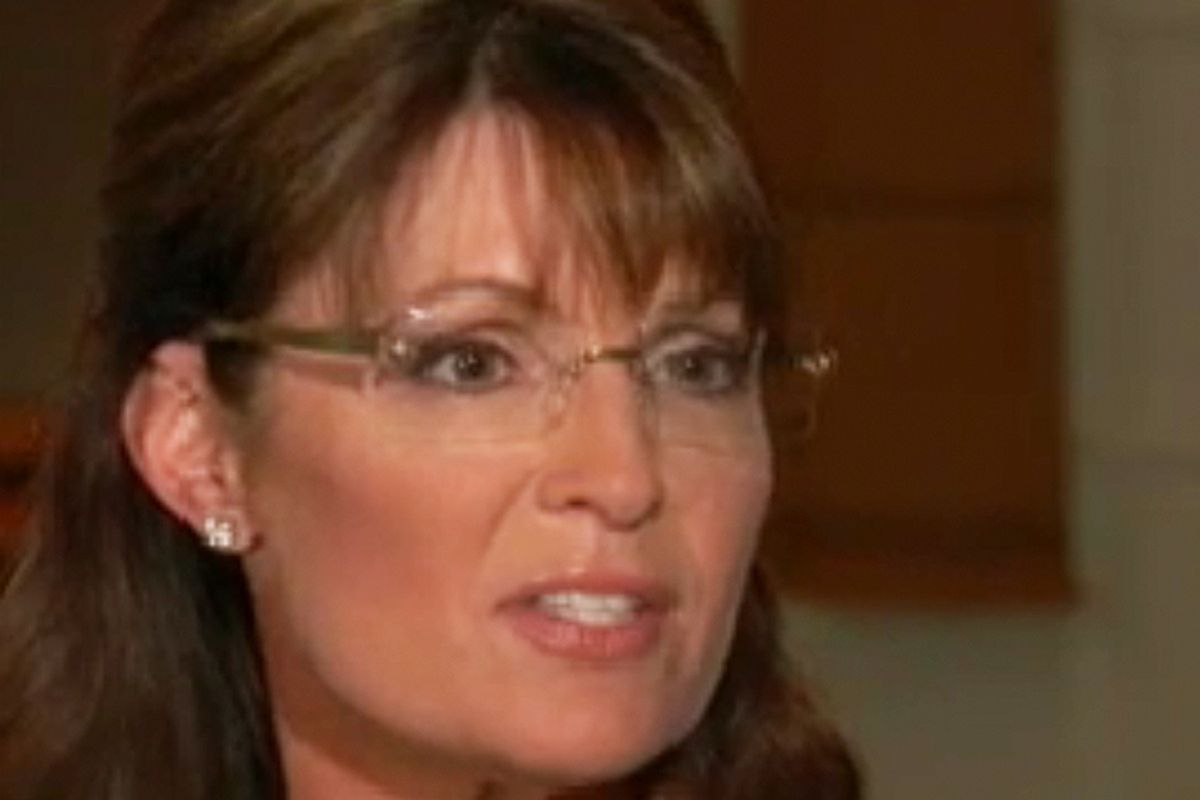 Sarah Palin, in an interview with Barbara Walters that will air on ABC in early December.
--

Sarah Palin, as you've probably heard by now, was asked by Barbara Walters in an interview that won't air until sometime in early December whether she could beat Barack Obama if she were to run for president.

"I believe so," was Palin's (somewhat) confident-sounding reply.

On one level, there's little news here. What was she going to do -- say she'd get crushed in the Electoral College? And it's typical Palin, too: A more disciplined politician probably would have cracked a joke and found a way to maneuver out of providing a direct answer, but with Sarah Palin, that's just not happening.

But since she answered the question, let's look a little closer at Palin's boast. Could she actually beat Obama?

The first thing to keep in mind is that at this exact point in the 1984 presidential cycle -- a few weeks after the 1982 midterm elections -- Walter Mondale thought he could beat Ronald Reagan, a notion that today looks laughable, given the 49-state drubbing that Fritz went on to suffer. For that matter, Bob Dole, who ended up gaining fewer electoral votes than any Republican nominee since Barry Goldwater (and the second fewest since Tom Dewey in 1944), was looking pretty good at this point in the 1996 cycle, just after Bill Clinton's Democrats lost the House, Senate and a boatload of governorships and state legislative chambers in a bloody midterm.

The point, obviously, is that circumstances can change rapidly. Obama looks as down now as Clinton did in 1994 and Reagan did in 1982, but his current polling plight isn't particularly relevant -- even if there are surveys that show Palin (and every other prospective Republican candidate) running close to him, or even ahead of him. If voters grow more optimistic about and confident in the economy in 2011 and 2012 (and if Obama avoids a major scandal or foreign policy catastrophe), then the president will be reelected with ease, just like Clinton and Reagan before him. So Palin, in this sense, is at the mercy of the economy. Even if she turns into a terrific presidential candidate and runs a flawless campaign, good economic news will doom her chances.

To be sure, conventional wisdom now holds that the nature of America's economic woes is so different today than it's been in past downturns that a rapid recovery before '12 is unlikely; this may be true, but remember, conventional wisdom in November '82 (even within the Reagan White House) held that unemployment would remain stalled near or above 10 percent through 1984. Also remember that the unemployment rate on Election Day '84 was actually higher than it had been on Inauguration Day 1981; but because it was declining rapidly from its early 1983 peak, voters were happy to reward Reagan. In other words, while Obama needs substantial economic improvement to ensure his reelection, the improvement he needs might not be as substantial as you'd think.

But let's say the economy doesn't recover in these next two years -- that it remains stalled, or that it declines further. This is the scenario under which Palin -- and every other Republican -- would have a real chance to beat Obama. In fact, history tells us that the GOP nominee would be almost certain to win if the economy is in the dumps. The election would be a referendum on Obama's tenure and voters would set a very, very low threshold for the Republican candidate. Reagan, don't forget, would likely have been unelectable had he won the GOP nomination in 1976 (when he narrowly lost the nod to Gerald Ford); his reputation as a trigger-happy extremist would have doomed him in the fall. But in 1980, voters were eager to get rid of Jimmy Carter and the high unemployment, inflation and interest rates, along with a hostage crisis in Iran, over which he was presiding. So Reagan it was, in a 44-state landslide.

But this is where things get interesting with Palin. A recent poll found that just 39 percent of all voters have a favorable view of her. Nearly 70 percent do not consider her qualified to be president. In nominating her under poor economic conditions, the GOP would be testing just how low that voter threshold really was. Reagan was somewhat of a tough sell in '80, but he communicated a level of poise, confidence and control that Palin doesn't.

This year's elections, as I've noted before, offered some potential test cases for a Palin general election campaign -- and the results weren't encouraging for her. In Senate races in Delaware, Nevada, Colorado and Alaska, the political climate was perfect for the GOP -- the same kind of gloomy economic conditions that will have to exist for their standard-bearer to win in '12. Swing voters in those states wanted badly to vote for Republicans -- or, more precisely, against Democrats. The bar was absurdly low for the GOP. And yet, Christine O'Donnell, Sharron Angle, Ken Buck and Joe Miller were all defeated. (Granted, Miller's case is a little different, since voters had the option of picking Lisa Murkowski, which they apparently did.) This could conceivably be Palin's fate in '12. Even in a fanatically anti-Democratic atmosphere, voters have their limits.

Is there a circumstance under which Palin could beat Obama? Sure. Would I bet on it happening? I don't believe so.