Counterfeit populism and its real cost

"Big Government" makes a nice punching bag, but here's what the GOP and its cheerleaders are really targeting 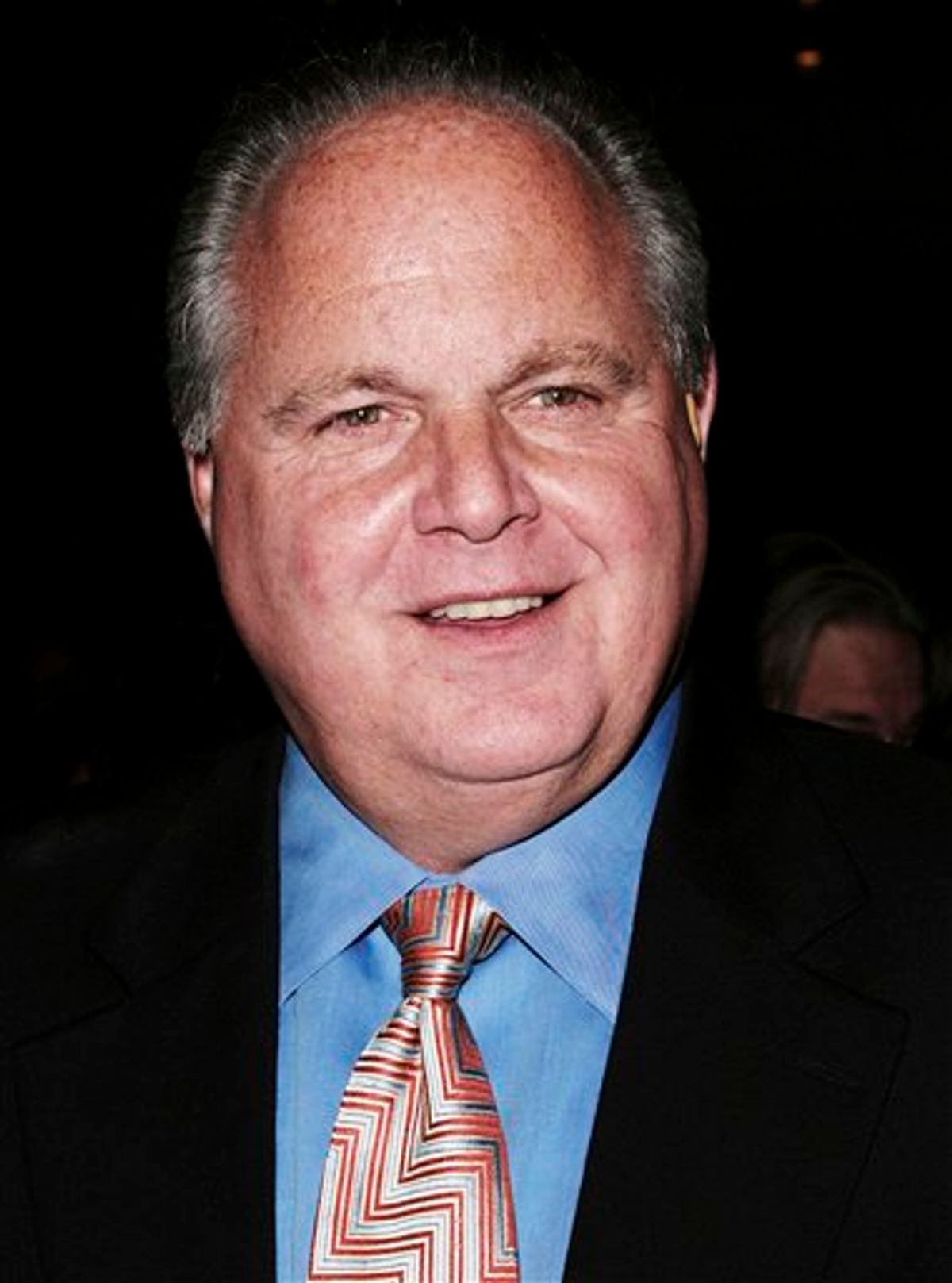 FILE- In this Jan. 30, 2008 file photo, radio personality Rush Limbaugh arrives for a screening of Bernard and Doris at the Time Warner Center in New York. According to the genealogists at Ancestry.com, President Barack Obama is apparently related to Limbaugh a discovery they made when looking for connections between political foes. (AP Photo/Gary He, file) (AP)
--

I want to come back to the notion of good governance again.

At the start of the week, Rush Limbaugh skewered me (or some fantasy female version of me) for arguing that President Obama believes that government can, if used wisely, be a force for good in society.

The vehemence of Limbaugh’s objection struck me. It seems to me the reason for his fury lies in the fact that opposition to good governance is now a fundamental tenet of conservative politics -- and, more particularly, of the multinationals and the lobbyists for business groups such as the U.S. Chamber of Commerce and the American Manufacturers’ Association, which spent so much money pushing GOP candidates and their message in the recently completed election cycle. It’s easy to frame in populist terms -- sticking it to the bureaucrats and career politicians who want to pen useless laws to interfere in ever more areas of our lives -- and, because of that, it’s a perfect vehicle for faux-populists like Limbaugh to deliver a broader package to mass audiences. After all, once the very notion of the possibility of “good governance” is seen as an oxymoron, then support for cohesive government institutions starts to evaporate. For, if good governance is an illusion, why would voters tolerate an expansion of the alternative: bad governance? The answer, is they wouldn’t; and that response, once coaxed out of them, makes them far more likely to support politicians who call for an ill-defined, but purportedly panacea-inducing reversion to “small government.”

The singular flaw, however, is that when one bothers to think about what the derisive, knee-jerk hostility to good governance actually means, it doesn’t take long to realize there’s nothing populist in the outcome. To the contrary, today’s anti-regulatory zeal, expressed so forcefully by the incoming GOP leadership of the House, is going to stir up a heap of trouble for millions of American families over the coming years.

In the current climate, hostility to the language of good governance means, among other things, opposition to workplace safety regulations, (the codes intended to, say, prevent mining disasters or oil rig explosions) or at least their rigorous enforcement; opposition to laws making it easier for workers to organize into trade unions; opposition to any and all attempts to raise the minimum wage; opposition to enforcement of existing labor laws that stop employers from arbitrarily withholding earnings from employees or forcing them to work extra hours off the books, in restaurants and other service sector industries in particular, so as to skirt overtime rules; even opposition to equal pay for equal work done by men and women.

This week the Chicago-based Interfaith Worker Justice campaign coordinated a day of action in more than 30 cities around the country, seeking to highlight the scandal of employers bilking employees out of earned income. Many of these employees are peculiarly vulnerable -- lacking legal residency documents, not speaking English, or people who have been unemployed for months or years and desperately fear losing their new jobs. They are easy marks, quiescent, often undereducated, tailor-made for exploitation. According to IWJ, billions of dollars a year are effectively stolen from the country’s poorest workers, in the form of wages not paid, tips not distributed, legally mandated meal breaks not provided. It’s Robin Hood inverted.

Related to this is the unseemly practice of companies paying female workers less than their male counterparts. This week, President Obama lambasted Senate Republicans for blocking a vote on the Paycheck Fairness Act. The measure, passed two years back by the House, would outlaw paycheck discrimination based on gender. It is, as the president rightly noted, a “commonsense” piece of legislation. It isn’t radical. It doesn’t fundamentally redraw the American economic landscape. All it does is prohibit a particularly unsavory form of discrimination.

By any reasonable measure, the government stepping into the fray to ban such an obvious form of discrimination represents something good. It sends the sort of signal Franklin Roosevelt was so good at sending during the New Deal years, that government is arrayed on the side of the little men and women against industrial and financial titans, and, more intangibly, simply against “injustice.”

But if you’re a corporate lobbyist, say, the last thing you want is the government actually standing up for fair practices in the workplace. It’s not good for business, not good for the bottom line.

Frame the issues as being about human dignity, fairness and the like, and Americans still respond in progressive ways. A little-noticed poll released last month by the Public Religion Research Institute found that two-thirds of Americans wanted to raise the minimum wage to somewhere in the $10-per-hour range. Amazingly, half of all Tea Party supporters voiced their approval of such a move. Huge majorities approve of the existence of workplace safety regulations, family leave laws and paid sick days.

Yet frame it as being about "Big Government" and the axis tilts rightward.

This is a political battle, playing out as a language battle. If Rush and his peers can successfully denigrate any and all notion of government as a force for good, it makes it that much easier to then attack valued social programs and workplace regulations; to undermine the minimum wage; or to convince voters that maybe government shouldn’t be in the business of acting as a steward for the Social Security funds; even to pooh-pooh the notion that government should intervene against exploitative employers who aren't paying their employees money owed them.

Rush might market that as a populist rebellion, from the ground up, against Big Government and out-of-touch politicians. It’s nothing of the sort. It's as elitist, as manipulative, a notion as any that's out there -- based on snowing his audiences so as to advance the interests not of those angry, riled-up listeners, but of wealthy, powerful individuals and companies at the expense of just about everybody else.