The Chinese government wanted rural farmers to buy more appliances. So let it be written, so let it be done 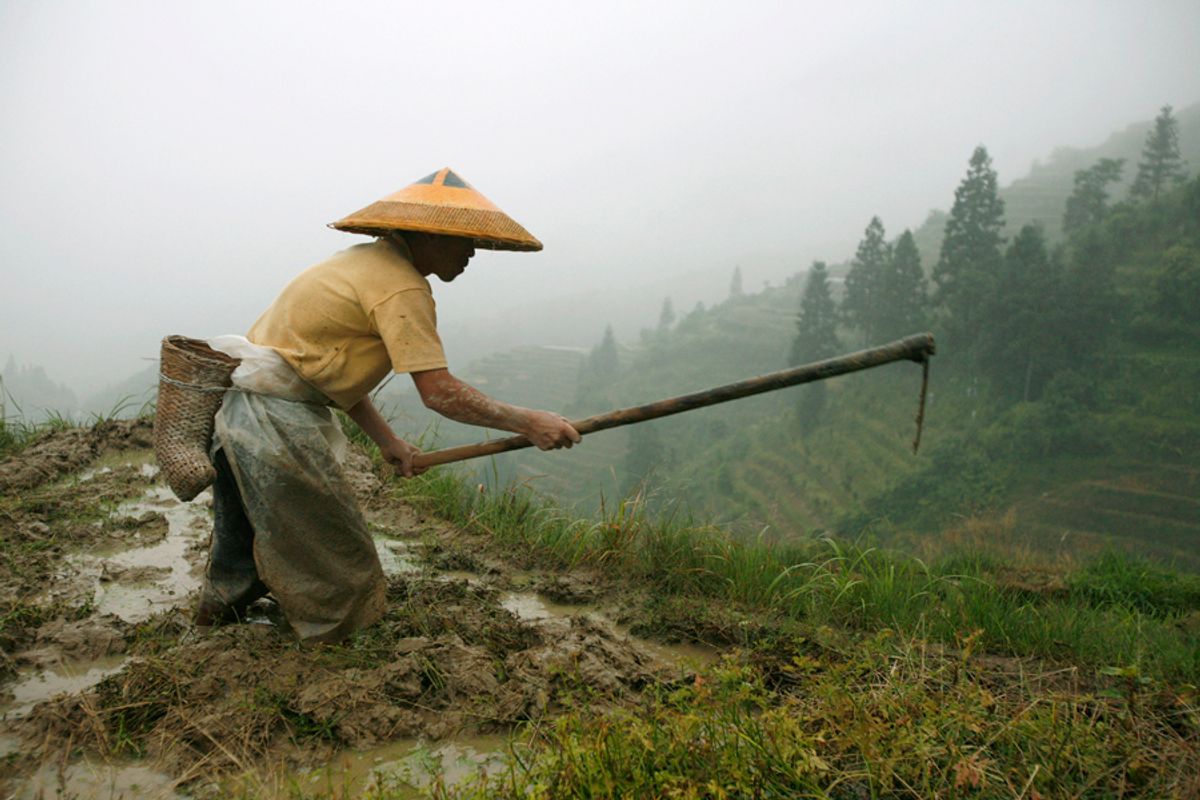 PINGWEN VILLAGE, Guangxi province -- As I walked into the living room of the farmer's new house, I noticed that the floor was still wet from a recent mopping -- and I was tracking in dirt from the village outside. I was mortified. Then I learned that the farmer had only mopped the floor because she had been warned moments earlier that a visiting delegation of American journalists might be visiting her home. Even worse -- now I was embarrassed both for making her speed-clean the house and for messing it up.

Xu Huayan, a member of China's Zhuang minority, did not appear to mind, however. She looked just as energized by the culture shock as we were. Americans do not visit Pingwen very often -- if ever, a fact partially attested to by the Chinese journalist who was filming us for a local TV broadcast. Xu quickly urged us to sit and seemed to enjoy the semi-random questions we threw at her: What crops do you grow? What programs do you watch on your TV? What do you use the Internet for?

She grew most animated when asked if she worked in the fields herself. "Of course," she exclaimed, pointing at her dark brown skin. "See my sun tan!?"

There is no doubting the reality of hard peasant labor in the village of Pingwen in Guangxi province. One of the new houses we inspected had been built around an older structure, a kitchen and shed where at least a dozen hoes and shovels leaned against one wall. Xu Huayan's open air basement was piled high with sacks of seed. In the fields stretching away from the village, peasants working mostly with hand tools toiled under a mildly hot sun.

And at the same time, there is also little doubt that the standard of living for Pingwen's farmers has risen dramatically in recent years -- to the point of inspiring perhaps even more amazement than the rapid growth of China's cities. One farmer boasted a much nicer TV than I do, and graciously invited a member of our delegation to check her e-mail on his computer. (The connection was fast, she reported.) Meanwhile, in the meeting room where we met with the village's leader, Mr. Tang, where portraits of Marx, Engels, Lenin, Stalin, Mao, and Deng Xiaoping brooded unsmilingly over us, we were told that the average per capita income of the village's residents was only about $700 U.S. per year. Even if it is true that incomes have been growing in recent years at an annual rate of 10 percent, it was hard to see how that added up to a consumer lifestyle that would not be frowned upon in California.

As a foreign journalist with no local knowledge dropping in from outer space, it is very hard to know how to evaluate what you see in a village like Pingwen. There were clearly deeper pockets of poverty in the village -- the two houses that we were invited to were, I'm guessing, the nicest houses in the neighborhood. The village was not far from a large town; it could not be considered remote or off the beaten track. To be honest, I have absolutely no idea how to consider this slice of Chinese peasant reality in the context of any larger picture.

But as I was staring at one farmer's fancy TV and gleaming new refrigerator, I recalled that more than a year and a half ago, I had written a blog post reporting the first signs of a resurgence of economic growth in East Asia, largely tied to China's stimulus program, which included specific measures to encourage domestic consumption of appliances by residents in rural areas. I asked the farmer -- did the government help you buy your refrigerator? Yes, he answered, he had taken advantage of a 13 percent government-mandated rebate on  big ticket consumer goods.

It's one thing to sit in front of your computer in Berkeley, Calif., parsing statistics about semiconductor sales that seem to indicate increasing domestic consumption in China. It's quite another to sit in the living room of a Chinese peasant, watching a badminton match on his giant TV while your colleague checks her e-mail on his screaming Windows machine. In China, government policy makes a difference -- whether that means high-rise apartment buildings proliferating like bamboo shoots after the spring rains, or brand new refrigerators in newly built business homes.

I have personally been following this growth story since the early '80s, and I marveled previously at the dramatic changes visible in China between my first visit in 1985 and my last visit in 1991. But the virtually nonstop acceleration since then, weirdly, seems more difficult to grasp after witnessing it first hand than noting it from afar. Three decades of continuous economic growth have imbued many of the Chinese we have met with a sense of confidence that is profoundly unshakeable. It seems inconceivable that the wheels could fall of the bus.

We asked the village leader, Mr Tang, what changes he expected in the next five to ten years. What most stood out was the certainty underlying his response: "We will definitely be purchasing our own cars."

Maybe so. Maybe the government can keep the miracle going. After all, consumer confidence, as any Western economist will tell you, is crucial to keeping the gears of an economy spinning freely forward. A lack of faith in the future is one problem that China definitely does not have.