When you crave the White House, being a governor isn't always what it's cracked up to be 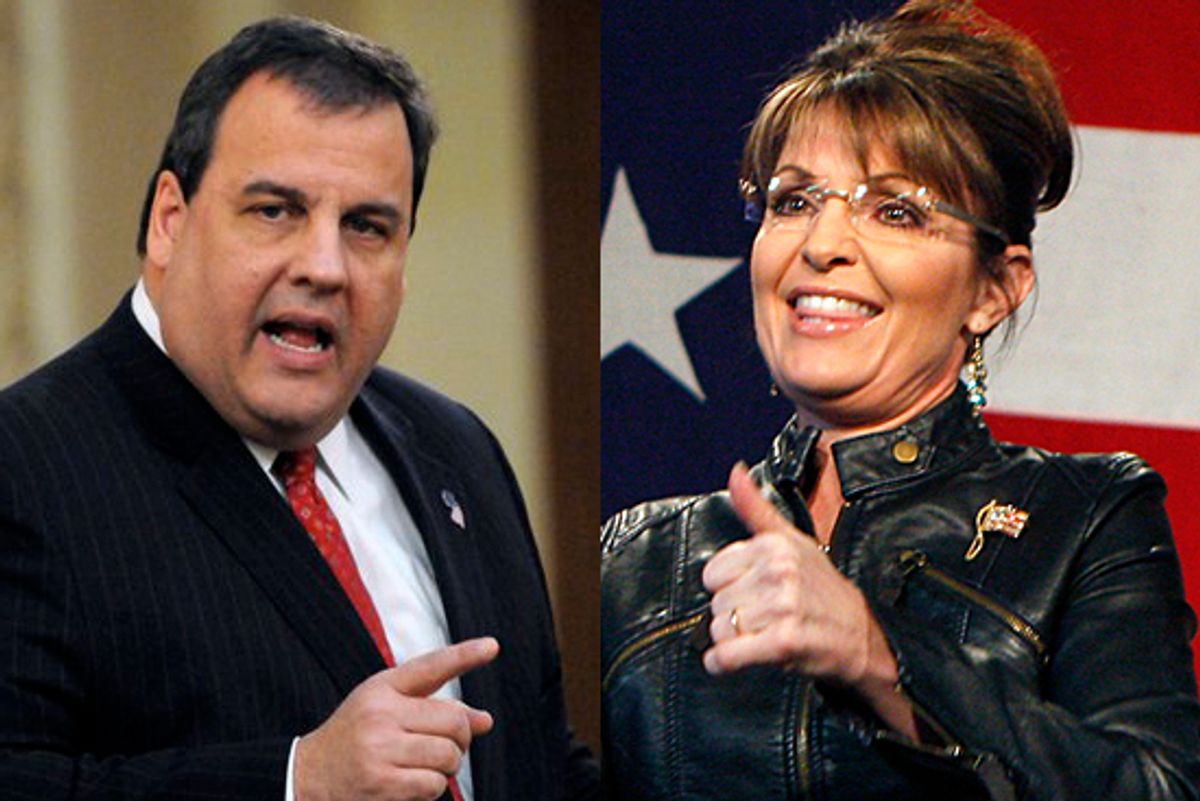 New Jersey Gov. Chris Christie takes questions from the media after signing his first bills into law on his first day in office as Lieutenant Governor Kim Guadagno, left, looks on during a signing ceremony in the State House in Trenton, N.J., Wednesday, Jan. 20, 2010. (AP Photo/Rich Schultz) (Rich Schultz)
--

Haley Barbour is the subject of a flattering New York Times piece from Matt Bai, who writes that if Mississippi's Republican governor "wasn’t the party’s biggest winner this election year, then he certainly emerged as one of the most formidable leaders eying the presidency in 2012."

There's something to this, given that Barbour, as chairman of the Republican Governors Association, played an unusually prominent role in raising money and funneling it to candidates this fall, a consequence of the Michael Steele train-wreck at the Republican National Committee. Add to that his status as a former RNC chairman and a one-time elite D.C. lobbyist, and Barbour is positioned, at least potentially, to call in a lot of favors from influential figures on the right.

He's got something else going for him too: His day job won't get in the way of any '12 aspirations.

Elected to the governorship in 2003, Barbour will end his two-term run at the end of next year. He doesn't have to worry about how diving into a national campaign might affect his standing back home; he'll be an ex-governor before the Iowa caucuses convene. Plus, Mississippi is a deeply conservative state -- one whose loyalties to the GOP are particularly strong in the current political climate. Thus, Barbour's approval rating sits around 70 percent. If he wants to head off to Iowa and New Hampshire in the next few months, he's not going to face much blowback.

In this sense, Barbour is lucky, because juggling a governorship and presidential aspirations can cause severe complications. The example of Bill Clinton comes to mind: Faced with a tricky reelection campaign in Arkansas in 1990, Clinton publicly pledged not to run for president in 1992 -- even though he very much wanted to (he'd nearly jumped in to the '88 race). After fending off Sheffield Nelson in the gubernatorial race, Clinton began the slow, incremental process of liberating himself from his promise to Arkansans, finally jumping in the Democratic White House race on October 3, 1991. Things ended up working out fine for Clinton, obviously, but only because he caught a big break: The early '91 Gulf War -- which ended with George H.W. Bush's approval rating near 90 percent -- essentially froze the presidential race until the late summer of '91. And even then, with Bush looking so formidable, the only Democrats willing to jump in were B-listers like Tom Harkin, Bob Kerrey and Paul Tsongas. In a different cycle, Clinton might have done some serious damage to himself with his '90 campaign pledge.

Other Republicans who seem interested in '12 haven't been as lucky as Barbour. Sarah Palin is the obvious example. She was only 20 months into her first term as Alaska's governor when John McCain picked her for his ticket in 2008, and when she returned to the state after that campaign, she quickly concluded that her duties as governor weren't compatible with her aspirations to be a national figure, and potentially a presidential candidate. Here's what Palin, according to a new profile in the New York Times magazine by Robert Draper, told an adviser before she quit as Alaska's governor in the summer of 2009:

Here’s the problem, she replied impatiently: I’ve got a long commute from my house to my office. I don’t have the funds to pay for my family to travel with me, and the state won’t pay for it, either. I can’t afford to have security at my home — anybody can come up to my door, and they do. Under the laws of Alaska, anybody can file suit or an ethics charge against me, and I have to defend it on my own. I’m going into debt.

We can debate whether Palin actually needed to free herself from the governorship to be a player in '12. Certainly, the move has helped her establish the kind of financial security that might make a national campaign more plausible; even if she loses disastrously and her brand suffers, she'll have a nest egg to fall back on. And given Alaska's geographic isolation from the rest of the country, her resignation has made travel much more practical. But her liberation came at a price, reinforcing concerns among voters that she's too erratic. This reputation may or may not hurt her in a 2012 Republican primary, but it would clearly be a factor in a general election campaign.

Then there's Chris Christie, the New Jersey governor who's found some clever ways to deny interest in the '12 race -- even as he ramps up his national travel and national media appearances. Christie's in a very awkward position because he's only been in office for 10 months -- and he knows that if he were to run for president, he'd better win (or do well enough to get another shot in 2016), because he'd be kissing his Garden State reelection hopes goodbye.

This is no small consideration for Christie. He spent years positioning himself for New Jersey's governorship, waiting until all of the pieces were in place and the timing was just right to make his move. He could have run in 2005; there was a gigantic void on the Republican side and most (but not all) party leaders were urging him to get in. But he resisted -- wisely, as it turned out. By the fall of '05, the political climate -- nationally and especially in blue state New Jersey -- was so poisoned against George W. Bush and the GOP that Christie would have been a sure loser against Jon Corzine. Instead, the task went to Doug Forrester, who was beaten by ten points. 2009 was different, though, with the Democrats running Washington and New Jersey voters -- for the first time since before the 1994 GOP revolution -- looking to vote against them. Christie won by four points -- the second-largest margin for a Republican statewide candidate in the state in 37 years.

Winning the governorship, in other words, was a landmark achievement for Christie. And by all measures, he enjoys being the king of Trenton. Sure, he'd probably trade it in for the White House, but he has to be careful. Because of New Jersey's general hostility toward Republicans, he has little margin for error within the state. To abandon his job after a year and seek the GOP presidential nomination would ruin Christie's standing with the Garden State's electorate. If he were to then flame-out in the GOP primaries -- say, six percent in Iowa and four percent in New Hampshire -- he'd return home a statewide joke, and a clear lame duck heading into his '13 reelection year.

To run in '12, then, Christie must have confidence that his chances of snagging the nomination -- or coming close enough to get a shot at the next one -- are more than decent. But that's a tall order, given his low name recognition now. As I've written, there's clear room for a GOP darkhorse, and there's reason to believe that Christie -- more than any other potential darkhorse -- has the attributes to play that role. But he'd still be taking an enormous chance.

In other words, if you're better on who'll be in the starting gate, Barbour is a much better pick than Christie -- even if Christie's legs are better equipped to go the distance.