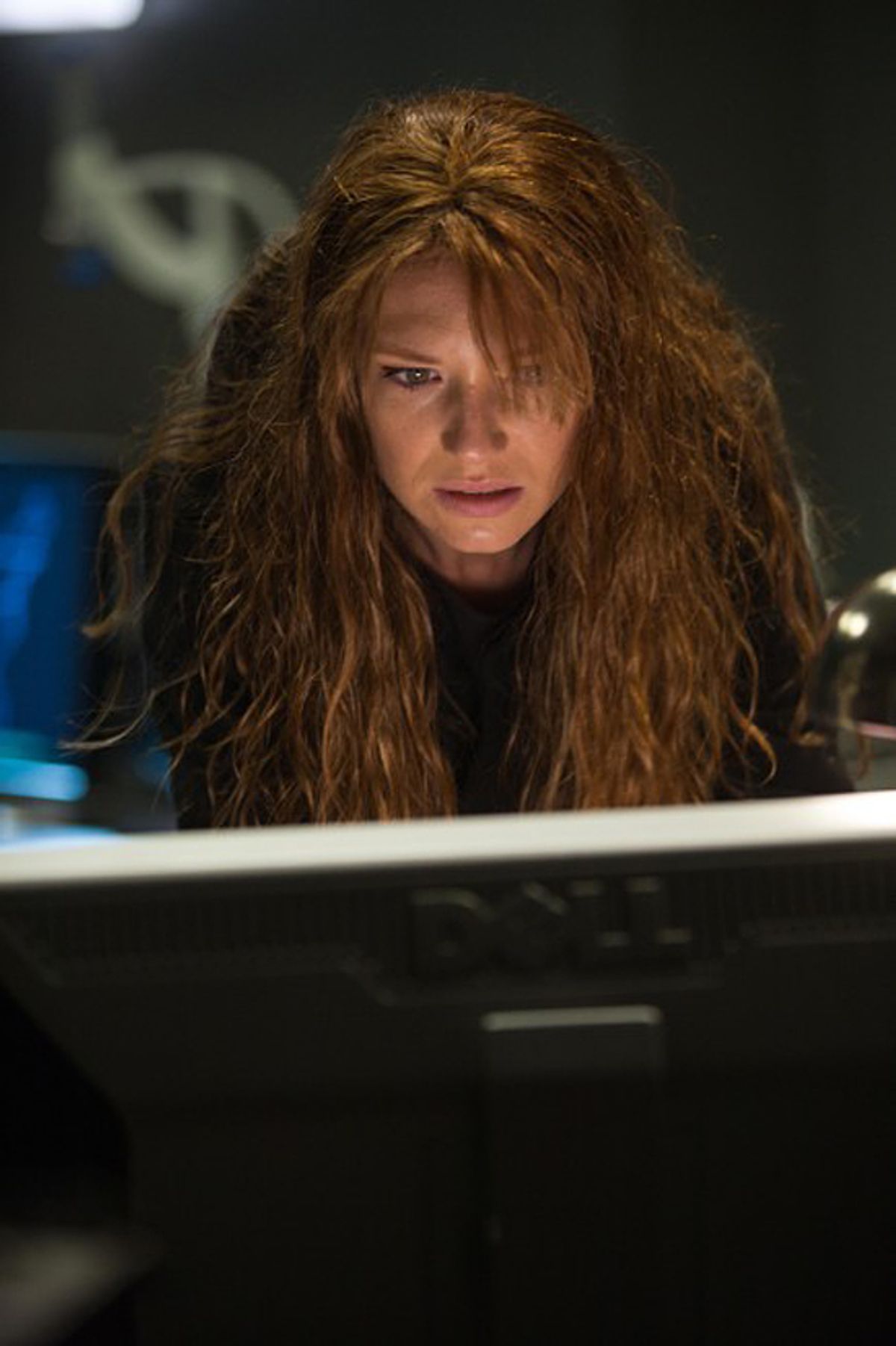 This week's episode was a real thriller -- not only was the prime case supremely creepy and well done, but the episode ends on quite a cliffhanger, as Olivia's attempt to get back home to Earth-1 proves less than successful.

The main plot involves a serial kidnapper dubbed the Candyman. On Earth-1, the Candyman is a large black man played by Tony Todd in the movies (films that incidentally emotionally scarred me for life as a child). Here on Earth-2, the Candyman is a scary bald white guy who likes stealing children from their bedrooms at night so he can harvest the sweet youthful nectar stored up in their pituitary glands.

The show opens as the Candyman collects his latest victim, Max, age nine. It's like my worst childhood nightmare given form in this scene, as Max's mother assures him there's no monster in the closet, exits the room, and then the door suddenly swings shut to reveal the Candyman standing there in the darkness, clad in a creepy silver mask. Max only has time to gasp as he's whisked away into the night. My inner nine year old weeps in terror.

We cut to the next morning. I suspected that cab driver Henry Higgins (Andre Royo) would be back to take part in Olivia's escape from Earth-2, so I'm pleased to see him return this episode. Welcome back, Henry! Olivia pops into his cab, all like, "Hey, remember that time I kidnapped you, made you lose a day's worth of fares and then threatened to murder your family? Good times! So, wanna grab breakfast?" Henry is apparently a very forgiving sort, because he agrees to hear her out. Over waffles and coffee, she explains that she needs his help to pilot a ship out to Liberty Island, where she plans to break into the DoD lab there. Henry doesn't like the idea, but offers to borrow his cousin's boat to help her out. Maybe he's just trying to spare another poor Earth-2 soul from being a victim of Olivia's never ending crime spree, since her original plan involved just stealing some random boat.

Apparently on Earth-2, business is booming for the Beeper King, as we see Olivia receive a page on her beeper instead of her fancy ear phone notifying her to head to Max's house. If you were wondering how they knew that the kidnapping was Fringe Division worthy, well the answer is they didn't. However, thanks to the Peter Bishop Act of 1991, all kidnapped child cases are treated as Fringe Division cases. In this instance, that pays off, as the team quickly determines that they recognize the pattern left behind. It seems Fringe Division has encountered the Candyman before.

We head back to Fringe HQ for more exposition about the case. The good news: All the previous victims were released after 48 hours. The bad news: They all came back with massive internal injuries and strange physical ailments such as cancer. Now the clock is ticking on poor Max. Olivia notes that each victim had the same injury at the base of their skull along the spine.

Broyles and Walternate discuss the case. Walternate looks really upset (for good reason) about the idea of a serial kidnapper on the loose that they are unable to stop. It turns out that Colonel Broyles and Walternate have a lot in common. Both men know what it's like to have a child abducted from their home. It seems that the Candyman abducted Christopher Broyles several years ago -- a trauma that neither Christopher nor his father seem to have recovered from. Walternate offers Broyles a chance to beg off on leading the investigation, given his past history with the Candyman, but Broyles declines. He frets about being stuck with Olivia, versus Alt-livia whom he actually trusts.

Eventually, Broyles will come to appreciate that Earth-1's Olivia, though not as fun as Alt-livia, is still a pretty awesome agent. But at first he refuses to soften up to her, especially once she pushes to interview Christopher about his abduction, since he's one of the two victims who recalls two captors (one young, one old) being present. Broyles doesn't respond well to this request.

Eventually, Olivia mostly puzzles out that the Candyman is stealing youth to drain the children's pituitary glands. Broyles finally relents to let her interview Christopher (thanks to some gentle prodding and a well timed beer from Mrs. Broyles). We learn a few interesting tidbits here: one, that Christopher is an Olivia fanboy, two, that he has cataracts, and three, he remembers a religious phrase uttered by the kidnapper. This phrase ultimately leads the team to a small church in Queens, where the man in charge, Reverend Marcus, helpfully turns over a list of congregants to them. The team breaks up to start canvassing the names on the list.

Stop me if you've heard this one before: A red headed female FBI agent enters the home of a squirrely looking white guy. She spots a clue that tips her off to his true identity, he gets all sweaty staring her down before retreating back into the hidden part of his lair. After a cat and mouse game through the dimly lit room, they fire upon each other at the same time. Her bullet hits home, while his misses and shatters a window in the background. A beam of light streams into the room. I swear, this scene was like an abbreviated version of the ending of the "Silence of the Lambs." In any case, the Candyman (a.k.a. Wyatt Toomey) is dead, Max is recovered and Olivia is the conquering hero of the day. Hooray.

Lincoln invites Olivia to grab a celebratory beer after work but she's ready to go home. And by "home" she means "back to Earth-1." She heads off to meet Henry at the docks. Unfortunately, just as she's about to get in the boat, she comes to the sick realization that Toomey, an unskilled laborer, couldn't have been working alone. His mentor Reverend Marcus, a former doctor, was in cahoots with him -- and oops, Broyles accidentally mentioned to Marcus that his son could ID him. Now we're in a recreation of "Red Dragon" (a.k.a. "Manhunter"), where there's a blind person stalked, a child and wife of the lead investigator in danger, etc, etc. I swear I'm not making this up, people. Olivia bails on her escape plan for the moment and calls Broyles, who rushes home just in time to save Christopher and shoot Reverend Marcus.

Olivia checks in with Colonel Broyles later at the hospital, where he expresses gratitude for what she did for him. Olivia then stops by to visit with Max (now I swear the show is just messing with me, since it looks like he has a stuffed version of Precious the poodle with him). Max tells Olivia that he remembers her shouting "FBI" when she came into the room to save him. Unfortunately the FBI doesn't exist on Earth-2 any more. Doubly unfortunate is that Broyles overhears all this. He calls Olivia out on the fact that she is conscious of the fact that she is not Alt-livia. However, given her actions in saving Christopher, he simply walks away and doesn't turn her in. Aw, it's nice to see that Broyles is cool no matter which Earth we're on.

The escape is back on, so Henry drops Olivia off at Liberty Island. It wouldn't be an episode of "Fringe" if Anna Torv weren't wet, so she dives off the boat and swims ashore. She breaks into the lab, preps the tank, injects herself and plunges in. She crosses over and for one glorious second thinks she's done it, before realizing to her horror that she's about to shift back. She manages to get a message to the rather surprised cleaning woman standing there, before she's pulled forcefully back across to Earth-2 and out of the tank by Walternate. Now we've come full circle to the first episode, with Olivia trapped once more, screaming and pleading with Walternate to let her go home. Dun dun!

While poor Olivia suffers yet again, horrible Alt-livia is warm and comfy back on Earth-1. She gets to snuggle in with Peter snuggle to watch "Casablanca" in bed. If Peter was suspicious before about Alt-livia (she incorrectly guesses that "Casablanca" stars Ronald Reagan and has a happy romantic ending), then he's 100 percent sure something is terribly wrong now, as he gets a call from the cleaning woman, who passes along Olivia's message that she's trapped over on Earth-2. His expression is one of horror as the full implication of that statement sinks in. Peter, you are literally Sleeping With the Enemy. Looks like Peter will be the next guest star on the "I banged my girlfriend's doppelganger by mistake" episode of Springer. Double dun dun!

Fringe continues its strong season this week, as we take another huge step forward in the main storyline in both universes. Over in Earth-1, Peter now knows about the traitor in their midst -- the question is, how will he deal with this news and will he take Alt-livia down before she puts a bullet in him? Meanwhile, things look dire for Olivia on Earth-2 -- will she figure out how to tap her universe traversing powers on her own, or will she need her friends from Earth-1 to come across and save her? If Peter crosses back over to save Olivia, is he just playing into Walternate's hands? After all, you can't fire up your special universe-destroying vacuum without your giant human battery, right?

If you're like me, you're thrilled to see what happens next. Tragically, here on Earth-1, we celebrate Thanksgiving next Thursday, so that means we have to wait two weeks to find out.

Summary: On Earth-2, the lambs stopped screaming a long time ago. Do you see?