To deter crime, get tough on Wall Street

Deterrence is the idea behind "tough on crime" sentences for violent offenses. But what about economic homicide? 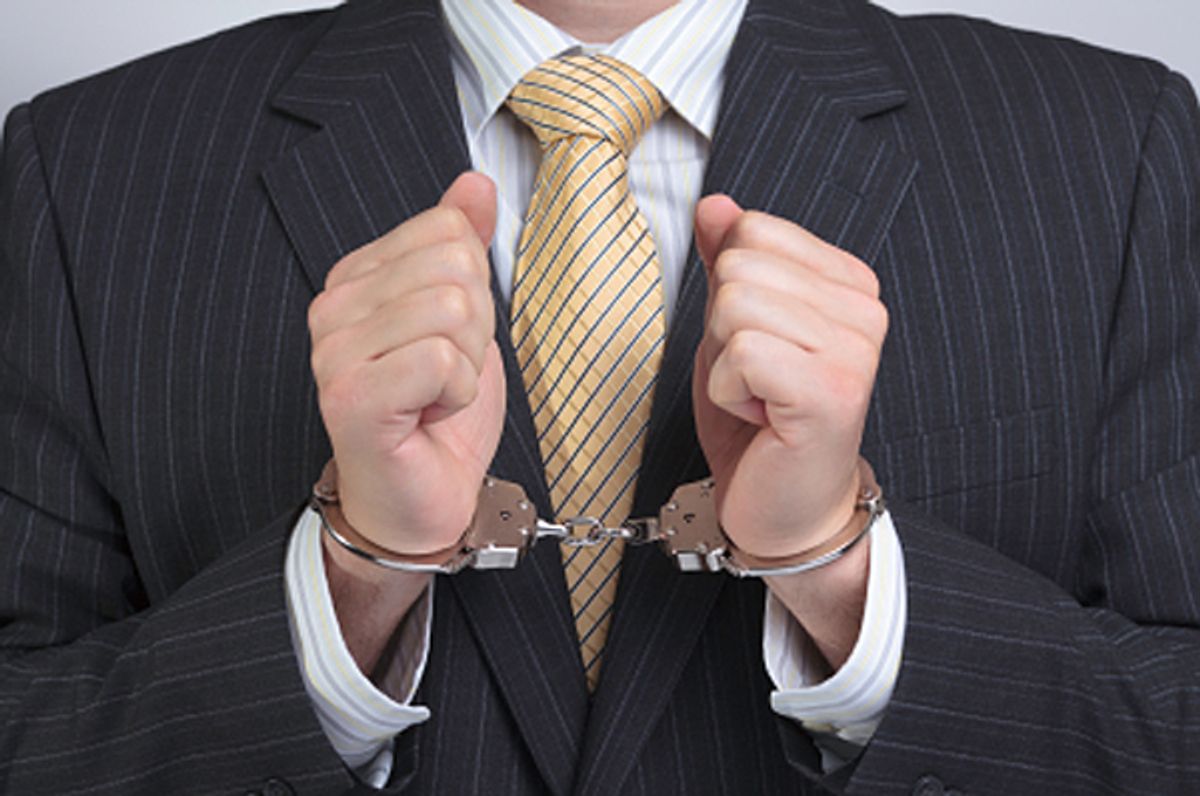 Often, the most provocative ideas arise after swigs of whiskey. This is especially true when a Rolling Stone reporter is around -- and, as I recently learned, it's all but guaranteed when that Rolling Stoner is Matt Taibbi, aka the heir to the magazine's gonzo throne.

I had the chance to hang with Taibbi last week after he spoke to a Denver audience about his new book, "Griftopia," which argues that Wall Street's bubble-bailout cycle has been one of the greatest -- and least prosecuted -- crimes in history. His presentation was serendipitously timed, coming the same week as a local Bonfire of the Vanities-esque scandal was underscoring the speculator class's privilege. In Colorado's own Bonfire of the Rockies, a local prosecutor had just reduced hit-and-run charges against a fund manager because the prosecutor said a felony would have "serious job implications" for the Sherman McCoy in question.

Over drinks in my living room, Taibbi and I pondered the financial Masters of the Universe and their maddening infallibility. I asked him why they never fear facing legal consequences. Do they believe they're untouchable? Or do they know law enforcement won't pursue them?

"They're not afraid because other than Bernie Madoff, when was the last time someone on Wall Street faced any real punishment?" he responded. "Sure, a few go to jail once in a while, but they're usually out in a few months and then on the speaking circuit. That's not exactly a deterrent against bad behavior that's making you millions."

Deterrence -- it's the vaunted idea behind "tough on crime" sentences for violent offenses. Lock the door, throw away the key, and the theory says that heinous acts will be prevented.

However, things haven't worked out that way because the toughest "tough on crime" policies are most focused on crimes of passion, derangement and destitution -- crimes that are often not calculated and therefore not deterrable. This is probably one of the reasons why the murder rate has been higher in death penalty states than in non-death penalty states, leading most criminologists to conclude that capital punishment does not hinder conventional homicide.

But what about crimes of economic homicide? These are the opposite of crimes of passion. When, say, a speculator securitizes bad mortgages and peddles them to pension funds as safe investments, that fraud involves exactly the kind of calculation that might be deterred via the prospect of harsh punishment.

"What if a bank CEO was given life without parole?" I asked Taibbi. "What if instead of country club jail, one of these guys was shown experiencing prison like a regular convict? That would have to stop some of the worst stuff, right?"

"Right, and go a step further," Taibbi countered. "How about putting a few of them in the electric chair? Are you telling me Goldman Sachs execs aren't then going to change?"

We both busted out laughing -- and hard. Not at the truth behind the theorizing, but at the idea that any of it would actually happen today. In 2005, Washington couldn't even pass a post-Enron proposal to hold CEOs legally liable for their companies' corporate tax fraud. So the notion that the same money-dominated capital will now subject CEOs to anything remotely "tough on crime" is, well, far-fetched.

And yet, the hypothetical is compelling, isn't it? That's because it highlights how our society misapplies deterrence -- and how it might apply the concept more successfully.

The necessity of such a criminal justice shift should be obvious. With financial fraud now so sophisticated and pervasive, we clearly need zero-tolerance solutions to change Wall Street's culture. Indeed, without true shock-and-awe deterrence, most regulatory reform will likely be an ineffectual thumb in the economic dike -- just as the thieves desire.