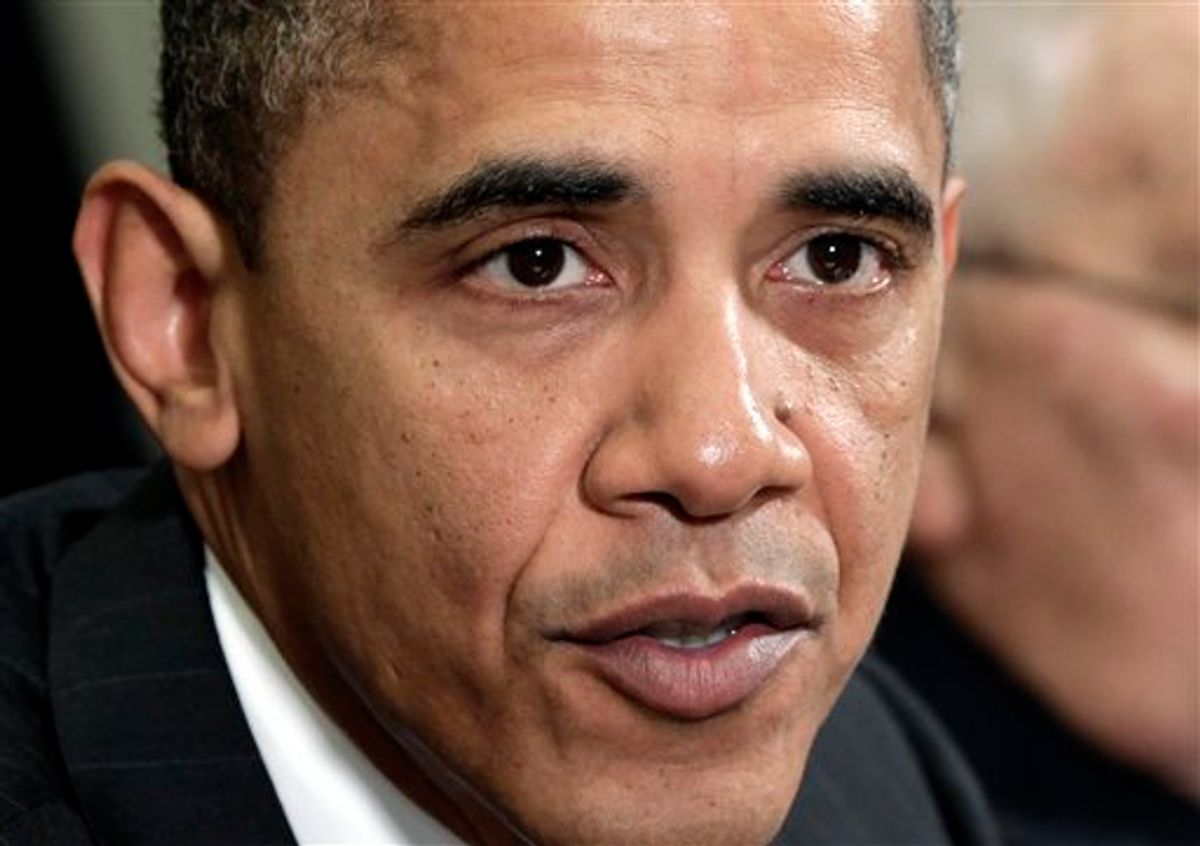 President Barack Obama waits for reporters and TV cameras to leave the room after making a statement on the ratification progress of the New START pact (Strategic Arms Reduction Treaty), Thursday, Nov. 18, 2010, in the Roosevelt Room at the White House in Washington. (AP Photo/J. Scott Applewhite) (AP)
--

If you believe Bob Woodward's reporting, here was President Obama's thinking on the war in Afghanistan just before he ordered the troop surge in late 2009:

"I think I have two years with the public on this. They'll stand by us for two years. That's my window."

And: "This needs to be a plan about how we’re going to hand it off and get out of Afghanistan. Everything that we’re doing has to be focused on how we’re going to get to the point where we can reduce our footprint. It's in our national security interest."

It's now been one year since Obama's "I have two years" remark, which he said in a meeting with military and civilian advisors, according to Woodward's book. While a recent poll reported that fully half of Americans oppose the war, there is hardly a public outcry at this point -- or even rumblings of an antiwar movement. Afghanistan was invisible in the midterm elections, overtaken by economic concerns.

Which brings us to an Op-Ed today in the International Herald-Tribune written by the president. It is notable because, in contrast to his 2009 remarks, Obama's emphasis is hardly on getting out of Afghanistan.

The section of the Op-Ed on Afghanistan notes the new non-deadline -- "the end of 2014" -- for a "transition to Afghan responsibility." But it emphasizes an "enduring commitment" and "lasting partnership," and promises that the Afghans will not "stand alone." Here it is:

First, on Afghanistan, we can align our efforts to transition to an Afghan lead, even as we sustain an enduring commitment to the Afghan people.

Our NATO-led coalition in Afghanistan is comprised of 48 nations — including contributions from all 28 NATO allies and 40,000 troops from allied and partner countries, whose service and sacrifice we honor. Our shared effort is essential to denying terrorists a safe haven, just as it is necessary to improve the lives of the Afghan people. With the arrival of additional coalition forces over the last two years, we finally have the strategy and resources to break the Taliban’s momentum, deprive insurgents of their strongholds, train more Afghan security forces, and assist the Afghan people.

In Lisbon, we will align our approach so that we can begin a transition to Afghan responsibility early next year, and adopt President Hamid Karzai’s goal of Afghan forces taking the lead for security across Afghanistan by the end of 2014.

And even as America’s transition and troop reductions will begin this July, NATO — like the United States — can forge a lasting partnership with Afghanistan to make it clear that as Afghans stand up and take the lead, they will not stand alone.

This rhetoric prompts the question: Assuming Obama is reelected in 2012, is it possible that the war in Afghanistan will continue -- in some form -- even by the time Obama leaves the White House in early 2017?