The hip-hop giant famously doesn't write down his rhymes. But a new book reveals their genius complexity 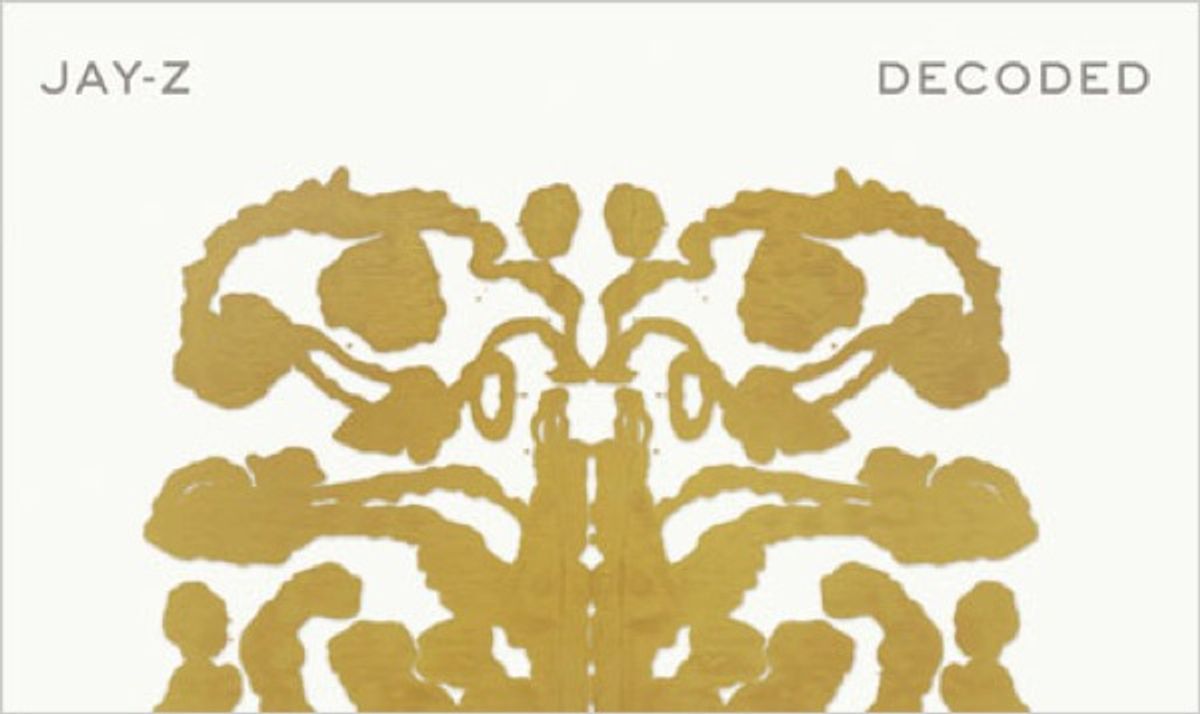 The name of Jay-Z's first book is "Decoded," a curious title given that among the work of celebrated rappers his lyrics might need perhaps the least decoding. Unlike the Wu-Tang Clan, for instance, whose arcane allusions, slang neologisms and syncretic philosophies have spawned two books and counting, Jay-Z is decidedly plain spoken and confessional. His most powerful lyrics -- and there have been many since his 1996 debut, "Reasonable Doubt" -- reveal anxiety, uncertainty and an uncanny awareness of human frailty to go along with the expected bluster and bravado of the rap idiom.

Despite Jay-Z's willingness to bare his emotions in song, we know precious little about the man himself, Shawn Carter. The general arc of his life's narrative is clear: A child of Brooklyn's Marcy projects transforms himself from aspiring rapper to drug hustler to global superstar to corporate mogul. He is the self-made man of American myth, remixed with a kick drum and a snare. Under the guise of his invented name, Jay-Z has become less person than persona. As he once rapped with characteristic concision: "I'm not a businessman, I'm a business, man." Though he's released a staggering 11 albums in 14 years, the man behind the business still remains a mystery -- often seen, but rarely heard.

That is what makes "Decoded" such an unexpected and welcome gift. At over 300 pages, it is a multimedia, multi-genre extravaganza: part memoir, part coffee-table book, part annotated compendium of lyrics, part polemic in the defense of hip hop's poesy. Jay-Z (with the aid of the respected hip-hop journalist dream hampton) intersperses personal anecdotes, rhetorical broadsides, and deep reflections with rich images and typography. From Andy Warhol's striking "Rorschach" on the book's front cover to the interior art, which ranges from Michelangelo's "Pieta" to a vintage Little Orphan Annie button, the book is a visual feast.

What the book isn't -- and what many hip-hop fans have long anticipated -- is a tell-all memoir. Though rich in anecdotes, the narrative is organized thematically rather than chronologically, underscoring the continuities across Jay-Z's career. The themes range from poverty to fame, from sports to politics. At times, these subject-driven sections leave one dissatisfied with the level of revelation and reflection, such as in his cursory treatment of race relations. Combined, though, they provide a penetrating glimpse into the mind of one of the greatest American artist-celebrities.

As a collection of lyrics alone, "Decoded" is an essential contribution. It joins a growing body of works, such as Paul Edwards's "How to Rap: The Art and Science of the Hip-Hop MC" and Yale University Press's "The Anthology of Rap" (which I co-edited with Andrew DuBois), that place the rap lyric in its proper context within the American popular songbook and the broader tradition of poetry through the ages.

Jay-Z is a rapper who famously doesn't write down his lyrics -- or as he once termed it, "the only rapper to rewrite history without a pen" -- and seeing his words on the page is a revelation. Syllables and sounds bounce off one another; clever figures of speech unfold before our eyes. Throughout the book, he continually makes the case for understanding rappers as poets, complex artists capable of rendering the familiar unfamiliar, embodying paradox and tension in their lyrics, and making things beautiful -- and ugly too -- as artists at their best always do.

"Turning something as common as language into a puzzle makes the familiar feel strange; it makes the language we take for granted feel fresh and exciting again, like an old friend who just revealed a long-held secret, " he writes. "That's why the MCs who really play with language . . . can be the most exciting for people who listen closely enough, because they snatch the ground out from under you . . ." "Decoded" will do just that, upending assumptions about hip-hop and leaving readers suspended in midair, staring down at a new and complex ground beneath their feet.