"Starstruck": How vapid celebrity took over the world 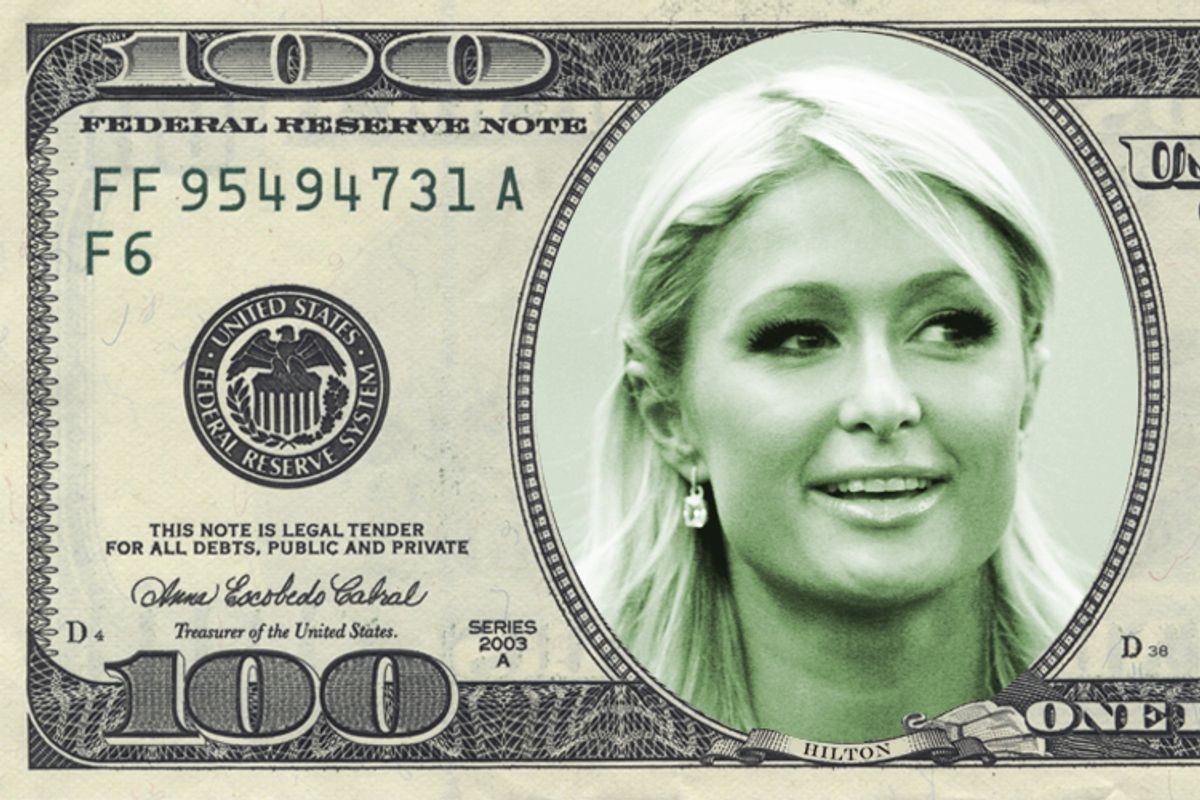 Over the past decade, "celebrity" has undergone a massive transformation: The rise of reality television, the Internet and social networking have meant that more people are becoming famous, for shorter periods of time, for doing less than ever before. Two decades ago, it would have been unthinkable that a woman like Snooki -- a woman of no discernible talent or taste -- could become a household name. And yet, there she is, waving for the camera and launching her own personalized slipper line.

As Elizabeth Currid-Halkett explains in her fascinating, well-researched new book, "Starstruck: The Business of Celebrity," recent developments in the celebrity industry can tell us a great deal about our changing global culture. In an era in which more and more people are feeling alienated from their peers, stars give us a common language and allow a greater degree of social cohesion. They also fuel enormous industries -- celebrity-driven occupations generate $1.5 billion in salary in Los Angeles alone. Elsewhere in the book, Currid-Halkett, the author of "The Warhol Economy" and an assistant professor at the University of Southern California, uses party photographs and Google to draw fascinating conclusions about the geography and social stratification of the celebrity world (Note to Angelina Jolie: Getting photographed in Las Vegas might actually hurt your fame).

Salon spoke to Currid-Halkett over the phone from Los Angeles, about our changing star culture, our obsession with celebrity minutiae, and why Paris Hilton actually deserves our respect.

You spend a lot of the book talking about Paris Hilton. When she first appeared, people were always joking that Paris Hilton is famous for doing absolutely nothing. But now she's just part of the celebrity ecosystem, and I don't think it's even questioned anymore -- oh, it's Paris Hilton giving a Nazi salute on a yacht. Why is Paris Hilton such an fascinating example of modern celebrity?

She is the purest form of celebrity. Other stars you look at, you can see that they are exceptionally beautiful, or they are exceptionally gifted, or exceptionally charismatic. With her, she's pure celebrity, and she's done it just by virtue of us being collectively fascinated with her. That's the definition of celebrity, that we are collectively focused on her, and for reasons that are not associated with anything that she's contributed. If you actually look at her social behavior, she's unique. Celebrities are celebrities because they behave differently than everyone else. And she's the perfect example of that. She networks more than anyone else. She gets herself in the camera's lens more than anyone else. She overshares. Those are all the qualities that are necessary to cultivate celebrity.

In a way, the fact that she's such a hard worker is actually kind of endearing.

I have to say, I always kind of had a soft spot for her. I really think she's not given enough credit.

She's also a modern celebrity because she's been shaped by a media industry actually invested in maintaining her fame. In part, we build her up so we have something to cover.

One of the things that's clear about celebrity, mainstream stardom, is that everyone has a dog in the fight. Paris is a celebrity because she wants to be one. But she's only a celebrity if the media also wants her to be one. Which means they need to write about her and they need to take her picture. And then the people at the clubs need to invite her to show up and there is this whole symbiotic system at work that perpetuates celebrity, because actually they need her to have jobs. In L.A. and New York -- and this is actually a conservative estimate -- in each city, it's over 100,000 people working in celebrity-driven industries. And the payroll is extraordinary too: About $11 billion on L.A. payroll and $20 billion on New York City payroll.

In features like Us Weekly's "Celebrities ... They're Just Like Us," stars are shown doing things like picking up laundry, and coverage of celebrities has increasingly shifted in recent years towards showing them in less and less glamorous situations. Why do you think that is?

Well, in some ways I think it has to do with the fact that we have access. As a thought experiment, in 1915 if we could have had access to the minutiae of stars' lives, would we have been interested? And I think the answer would have been yes. But now celebrities also perform a different function. There is this sense of them being people we can identify with. You look at someone like Snooki or you look at Jade Goody in the U.K. [the "Big Brother" star who died of cancer] and you see that they've played that role. And I also think that there's something about the fact that maybe we're aware that the perfection is a façade -- so it's actually much more real to us if we see them picking up dry cleaning or hanging out with a boyfriend. The irony is that could be staged too. Celebrities are pretty on top of the media and how to control it.

I feel like celebrities these days are less likely to be admirable figures, and more likely to be figures of pure contempt. People like Snooki and "The Apprentice's" Omarosa fill a very different role than Angelina Jolie in that sense.

You're totally spot on with that. We particularly likely to watch our reality show stars act like train wrecks -- and that is definitely different. Even with the tragedy that surrounded Marilyn Monroe's personal life, we still idolized her.

What we found is that 80 percent of photos are taken in three places -- London, L.A., New York. If you want to be in the camera's lens, you want to go to those three places. But it depends on the kind of celebrity. Some celebrities, which we call "media stars," are driven by the ink spilled about them, like Paris Hilton, while other celebrities are driven by the fact they are, at least at the outset, talented, like Angelina Jolie. If you're a media star, you do want to stick where the media is, because that's how you get your picture taken. This is why L.A. is super-influential if you're a media star. But it's not if you're a talent star, because L.A. is not a unique place to go. What's unique is if you show up in Tokyo or you show up at a premiere in Australia. Part of that is if you're an A-Lister you get invited to these things, rather than just having to hang out at the party circuit in L.A. Why would Angelina Jolie ever do that?

Why is Vegas such a bad place to get photographed?

Vegas is a fascinating place, because as a talent star you don't want to go there -- it's not associated with anything positive. As a media star, if you go for one event, it's OK. But it's not if you stick around Las Vegas for consecutive events -- that can really have a terrible impact on your media profile. The media paparazzi show up to take pictures of Paris' birthday party and then they go back to L.A. So if you hang out in Las Vegas after the party is over, you're not getting photographed. Which means it's impacting your media volume.

As a result of social networking it seems like getting access to celebrities is much easier than it's ever been. You can tweet at Conan, or Ashton Kutcher, and he'll tweet back at you. Suddenly, anybody can interact with a star, as long as they have a Twitter or a Facebook account. Do you think it's taking away some of the aura of celebrity?

I think it decreases their aura but increases our interest. I don't think the fact that they've become more human has made us less interested in them. I think it's made us more interested than ever. We're dying to get the next picture of Britney grabbing a bag of Cool Ranch Doritos.

But doesn't studying celebrity in a statistical manner ignore the fact that there's also a magical alchemy to celebrity. I mean, The Situation may be ridiculous and largely talentless, but there's also something undeniably magnetic about him.

It's really hard to measure the kind of qualities that Snooki or Angelina Jolie or A-Rod have that makes us obsessed. The real test of celebrity, of course, is that we're fascinated. Snooki and Angelina Jolie couldn't be more different except for the fact that they're both brunettes, and yet our relationship with them, broadly speaking, is the same. I agree with you that actually the qualities within the person are very hard to fully capture. There's a reason I care about where Snooki got a latte, but I don't care where Tara Reid is getting a latte.

But I really believe celebrity has a lot to do with agency. If you look at someone like Keira Knightley, she's a celebrity in some sense, because she's an A-Lister. She's starred in great movies. She's very pretty. She shows up at big events. But she's so intensely private that she's barely a celebrity. I know very little about her life, which makes it hard to create any sort of connection with her. And that's a choice.

There's often a lot of shame associated with our obsession with celebrity -- a lot of people think it's petty, or destructive. I would disagree -- I actually think celebrity gossip says a lot more about American culture and values than most people give it credit for.

One thing that made it very hard to write this book is that we do judge celebrity. We think it's silly. We think it's frivolous. But it's such a ubiquitous social phenomenon that it can't be. And I think a reason why there aren't a lot of books written about celebrity is that it's a hard topic to write about seriously. But it's our duty as social scientists, and people in media, and people who think about these things, to be ask ourselves: Wait! Why do we care so much about this stuff?

Do you think our obsession with celebrity is hurting us?

I actually think it's neutral. I don't mean that as a cop-out. I think it's something that has always existed. We've been doing this in our social circles since we had social circles, from the popular girl in high school to the star cousin at the family reunion. I think where it becomes a problem is if it distracts us from some things that genuinely are more important. Major geopolitical issues are more important than where someone's having dinner or who Britney Spears is dating. We genuinely do seem to care more about these people's prosaic lives than we care about real issues. I don't want to pass judgment, but I think it's an observation that’s worth thinking about.