The "old-versus-young" season looked like a dud, but then the reality show yielded its sharpest weapon: Surprise 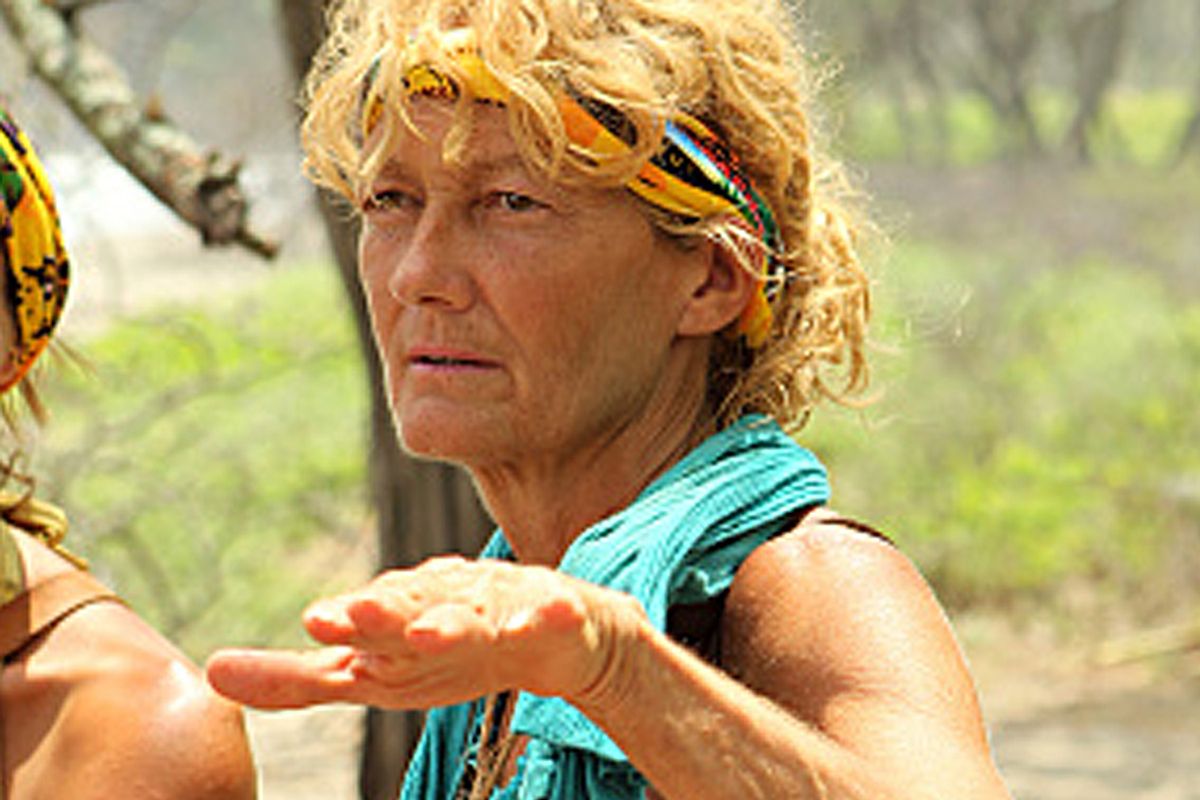 Back in 2003, when everyone feared that reality TV show producers were actually bloodthirsty aliens sent from another planet to humiliate and demean us so thoroughly that eventually we'd commit hara-kiri on the sword of our own self-hatred, "Survivor" always seemed like the one show created by an earthling who fully grasped reality TV's dramatic potential. Unlike the "Temptation Island"s and "Paradise Hotel"s and other "Rotten Island"-themed televisual experiments of the time, "Survivor" was thoughtfully designed to highlight the charms and flaws of the assorted naifs and manipulative bastards selected to crouch on the beach together, cooking bad rice in the rain. More than just leaning into the psychological experiment at hand, though, "Survivor" set the bar higher than it needed to: The camerawork was beautiful, setting the scene by lingering on breathtaking shots of sparkling tropical waters and local wildlife, the theme song was catchy, the editing was smart and suspenseful, and the game itself was addictively simple: Stay focused, maintain your sanity, and be the last one left on the island.

Over the years, while the depraved reality three-ring circus of surgically reconstructed housewives, striving entrepreneurs, C-listers and ladies who want to marry Flavor Flav has collapsed in on itself, "Survivor" still survive -- thrives, even. After a few scattered bad seasons, the show has been on a roll lately, thanks to some well-timed twists and casting stunts (All-Stars! Race wars!), hitting a high point in the colliding self-righteousness and open hostility of "Heroes vs. Villains."

Now that the show's loyal audience has grown accustomed to these gimmicks, though, each new season requires a new stunt. While the "Old vs. Young" teams that launched the current season of "Survivor: Nicaragua" (8 p.m. Wednesdays on CBS) looked promising at first -- how would hot youngsters with brawn match up against unhot oldsters with brains? -- the formula caved in when the Youngs proved to be beautiful, strong and at least functionally smart, while the Olds turned out to be every bit as whiny, arrogant, vindictive and pathetic as … well, actual old people. Oldster Dan brought along a pair of bad knees to match his $1,600 pair of Italian leather shoes (huh?). Oldster Holly stole and buried Dan's shoes in the sand (why?), then rolled out the extra-large crazy guns by confessing her crime to Dan and everyone else. Meanwhile, oldster Marty indulged in an all-too-familiar "I am the puppet master" routine, even as he demonstrated that he had about as much strategic finesse and self-knowledge as a sock puppet. One with googly eyes and really bad hair.

Despite their physical, mental and emotional handicaps, the old tribe had one thing going for them: former Dallas football coach Jimmy Johnson. Although "Survivor" producers had never cast a celebrity on the show, it was instantly clear why they'd break their own rule with Johnson. Not only is he a longtime "Survivor" fan, but he epitomizes the strengths, wisdom and charisma that come with age. From the first day, he was a magnetic presence on his team whose natural leadership couldn't be denied. He made tough calls, he rallied the team, he calmed them when they were disappointed; this was the kind of leader that every "Survivor" player, squatting in the cold and the rain, might've dreamed of. Using only his words, he made shivering in soaked clothes while the TV cameras rolled seem like a deeply valiant and enviable act. Even better, he even made it clear that he didn't want to win at all, he simply wished to enjoy the experience and be the best team member that he could possibly be.

Now, if you're an old (old starts at 40 here), whiny know-it-all with creaky joints and a bad attitude like I am, the last thing in the world you want is to watch other old, whiny know-it-alls hobbling around on the beach, cradling their creaky elbows, moaning about their bad knees, complaining about how cocky or unstable or weak everyone else on their stupid team is. "He thinks he knows everything, but he's wrong!" the old people said of each other. "I'm the one who knows everything! Me! Owww, my back." If I wanted to hear pathetic old people whimper about other pathetic old people, I'd attend more neighborhood zoning meetings.

Meanwhile, the youngsters were frolicking about, their supple young parts bouncing in their bikinis, their awe-inspiring meat Chiclets bronzing nicely in the Nicaraguan sunshine. Of course they weren't getting along well or anything like that -- but young people are used to hating each other for no good reason. South Central bad girl NaOnka hated long-haired Spicoli-style dude (whose real name I don't remember because he was instantly renamed "Fabio" when he hit the beach -- they even use "Fabio" in the opening credits). Stranger still, everyone seemed to dislike Kelly, a great athlete with a prosthetic leg, unfairly targeting her as a threat to win the "sympathy vote" early on, even though she wasn't remotely the type to pander for a jury's sympathy. The young team was playing by mean-girl high school rules, cavalierly booting whoever seemed uncool or out of sync with the majority. And who was at the center of it all? Mean girl Brenda and her sharp metrosexual boy sidekick, Sash.

Depressingly enough, it soon became clear that Brenda was the sort of effortlessly confident popular girl who barely had to lift a finger to make the tribe do her bidding. Gigantic, gorgeous country boy Chase followed her around like a puppy dog enforcer. NaOnka made an early alliance with her and silently backed her every move. Even though Sash seemed capable of striking out on his own, he stuck close to Brenda, with her casually dismissive, insidiously passive demeanor. Like all quiet but powerful popular girls, Brenda insisted that no one yammer on about strategy or get paranoid or negative around her. Rather than playing the game outwardly, Brenda wanted everyone to mirror her calm overconfidence and follow her lead. Brenda was the anti-Jimmy Johnson: no apparent strategy, no words of wisdom, no comforting assurances for her closest allies, just shrugging and sighing.

In other words, "Survivor: Nicaragua" was really starting to suck.

But then, on Thursday night, the tide start turning. Holly says that Brenda is a threat, and she wants her gone. Benry also wants Brenda gone. Dan, wincing and grabbing his bad knees, agrees. The big surprise, though, is that NaOnka, former Brenda ally, takes her own former enemy Fabio aside, and tells him that everyone else wants Brenda gone.

Loyal puppy dog Chase tells Brenda that everyone wants her gone. And what does she do? She shrugs and sighs and basically says that campaigning to save herself is beneath her and against her personal philosophy, which amounts to something along the lines, "I rule, therefore I should continue to rule."

Best of all, the immunity challenge requires players to support their weight by holding onto a longer and longer rope, testing their strength and endurance. The final two to battle it out? Huge young country boy Chase and little 56-year-old country woman Jane. Finally, Chase falls, and Jane is the winner! A victory for unpathetic old people everywhere!

At tribal council, Brenda tells Sash to give her the immunity idol using only her big brown eyes, but instead Sash gives her the Heisman. Almost everyone, including Chase and Sash, votes Brenda out. Now we see how far shrugging and sighing gets you in this game.

Episodes like this one demonstrate exactly why "Survivor" has survived all these years. After weeks of predictable, depressing developments, there's an unexpected uprising, and the whole season is transformed. Next week, a whole new game begins, because all of the preexisting alliances have been tossed out the window in one fell swoop. Meanwhile, all of our prejudices have been overturned: Oldster Holly turns out to be sane, sidekick Sash turns out to have a mind of his own, dimbulb Fabio turns out to be much smarter than he at first appeared, and oldster Jane turns out to be the toughest of them all.

This is what we want from reality TV: We want to be surprised by real people. We want to think we have them figured out, only to peel off new layers and discover new strengths, new weaknesses, new peculiarities, and new charms. Somehow, against all odds, "Survivor" delivers.