What is it with Barbara Bush and female V.P. nominees?

Two women have been nominated for the vice-presidency. And now Barbara Bush has taken shots at both of them 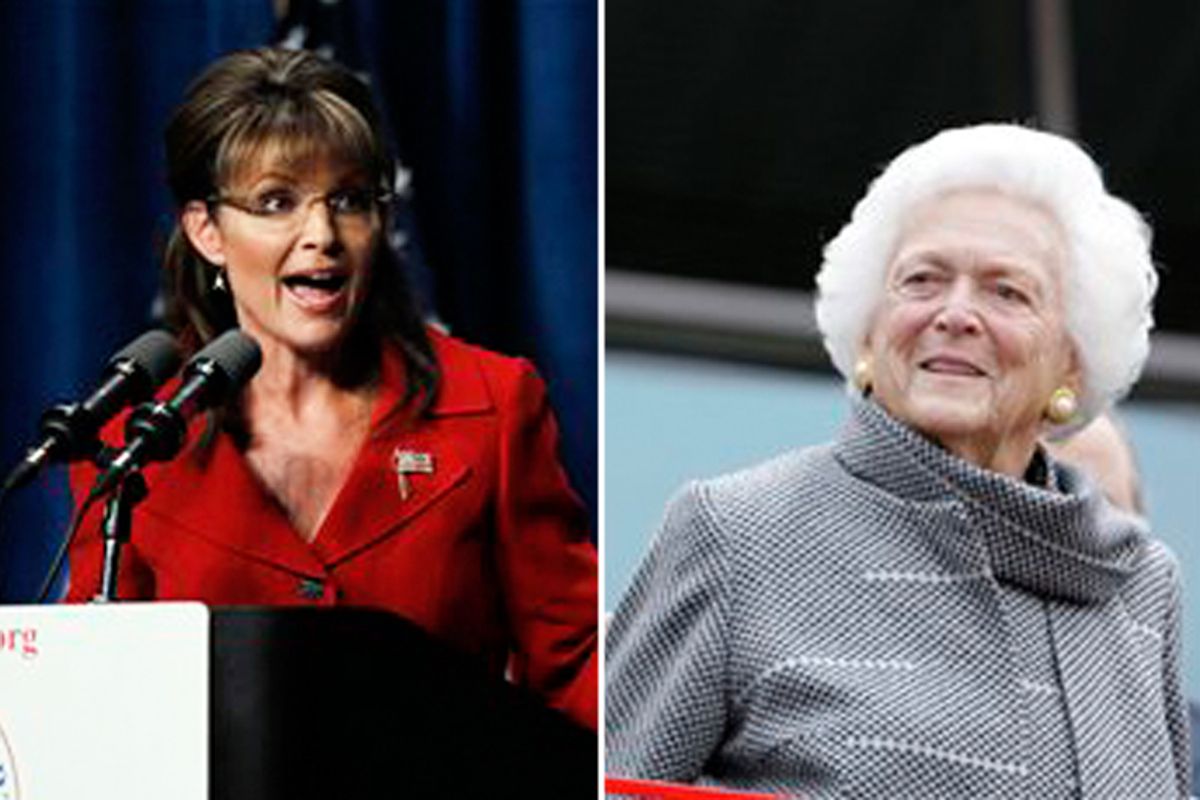 In an interview set to air tonight, Barbara Bush makes it clear to Larry King that she doesn't have much enthusiasm for the presidential campaign that Sarah Palin keeps threatening to wage.

"I sat next to her once. Thought she was beautiful," the former first lady tells the CNN host. "And she's very happy in Alaska. And I hope she'll stay there."

Bush's apparently dim view of Palin as a politician isn't exactly surprising. While she's largely stayed silent on policy issues through the years, she has on several occasions distanced herself publicly from the GOP's right-wing base. In her 1994 memoir, she confessed to supporting abortion rights under some circumstances and lashed out at the far-right tone that Pat Buchanan struck in his infamous speech at the 1992 Republican convention. In many ways, she and her husband typify the wealthy, Northeastern, culturally moderate WASP aristocracy that ruled the GOP before the Goldwater/Reagan forces took over. When he ran for president in 1980, don't forget, George H.W. Bush dismissed Ronald Reagan's tax cut plan as "voodoo economics" and expressed support for abortion rights.

Interestingly, though, this makes the second time that Barbara Bush has gone on the record with less-than-flattering words about a female vice-presidential candidate. Back in October 1984, when her husband was running for reelection as Reagan's vice-president, Bush referred to Geraldine Ferraro, Walter Mondale's running mate on the Democratic ticket, as "the four-million dollar -- I can't say it, but it rhymes with 'witch.'" The comment came the day after Bush and Ferraro met for their only debate -- the same day that George H.W. Bush was caught bragging to a group of longshoremen that he'd "tried to kick a little ass last night." (Earlier that week, Bush's press secretary, Pete Teeley, had also landed in hot water for saying that Ferraro came across as "too bitchy.")

In the wake of all three comments, Ferraro responded that, "People who have the experience of the Bushes don't do those things unknowingly." Barbara Bush ultimately called Ferraro to apologize. Something, though, tells me that this incident won't end with a call to Palin.