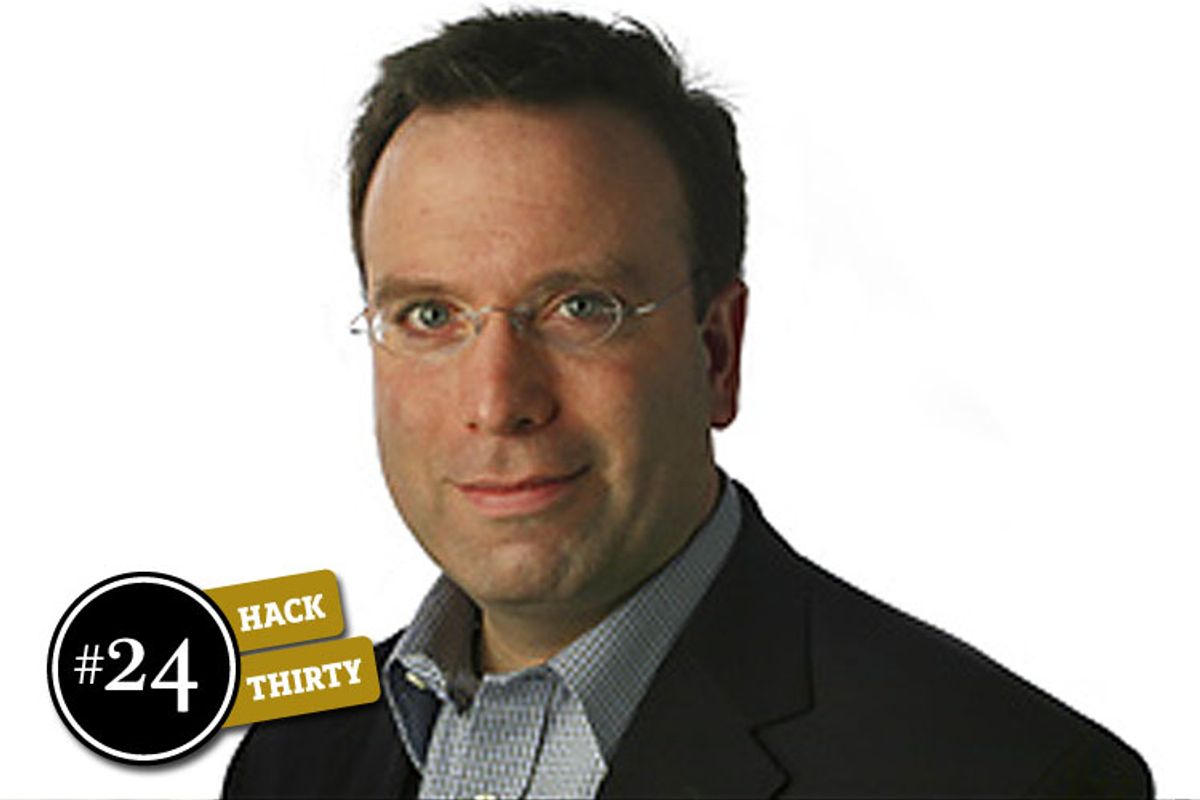 To his credit, Dana Milbank was one of the first members of the establishment press to subject the Bush administration to the same sort of nitpicking scrutiny that the Clinton administration faced, and the White House hated him for it. While the Washington Post routinely buried stories debunking Bush's Iraq claims in the middle of the A section under unsexy headlines, Milbank's 2002 fact-check of a number of Bush claims was one of the few to run on the front page. (It inspired furious White House pushback, carried out primarily in ABC's "The Note" -- and we'll get to the editor of that newsletter later.)

But Milbank was also known for writing funny, snotty White House press pool reports. In the early days of the Bush administration, someone began leaking the not-for-public-consumption pool reports to conservative blogs, to prove that liberal journalists were biased against the president. One of Milbank's pool reports sparked a furious outrage. The Post responded by giving Milbank a sort of column in which he could file snotty stories about everything in Washington. And that was when Milbank gave in to his inner hack.

It's the supposed "humorousness" of his Washington Sketch columns that made them so embarrassing. Milbank combined your dad's love of pointless punning with the sort of sniping at your lessers that many a privileged Ivy Leaguer mistakes for wicked wit.

Humor generally needs to come from some sort of point of view to have real bite, but Milbank did not count as an "opinion columnist," so the message behind his work -- the grand, overarching theme -- was basically "isn't all of this -- the theater of legislating, the passion of activists, the entire political process -- a stupid, pointless game played by idiot clowns?" While his best columns were very dry reports on inherently ridiculous events, when Milbank was charged with inserting his own ridiculous, things got quickly dodgy. His establishmentarian ethos led him to call those who found Bush's Iraq lies objectionable rather than politics-as-usual "wingnuts," because even though Milbank himself reported that Bush repeated misinformation in an attempt to launch a war, it is not very savvy to get all upset about that fact. (The distinction between "reporter" and "columnist" -- but not "opinion columnist" -- led to a lot of confusion about when and how Milbank was allowed to sling insults against stupid hippies, too.)

That Ivy League "humor" -- the sneering of a lifelong member of the elite -- bit Milbank in the ass when he called Hillary Clinton a "mad bitch" in his horrific Web video series with Chris Cillizza. (Just some hilarious political incorrectness, guys, lighten up!) The series was unceremoniously ended. But Dana Milbank finally graduated to the opinion section, where he considers himself a liberal despite the fact that his voting record is that of a moderate Republican.