The internal contradictions of the Shanghai skyline 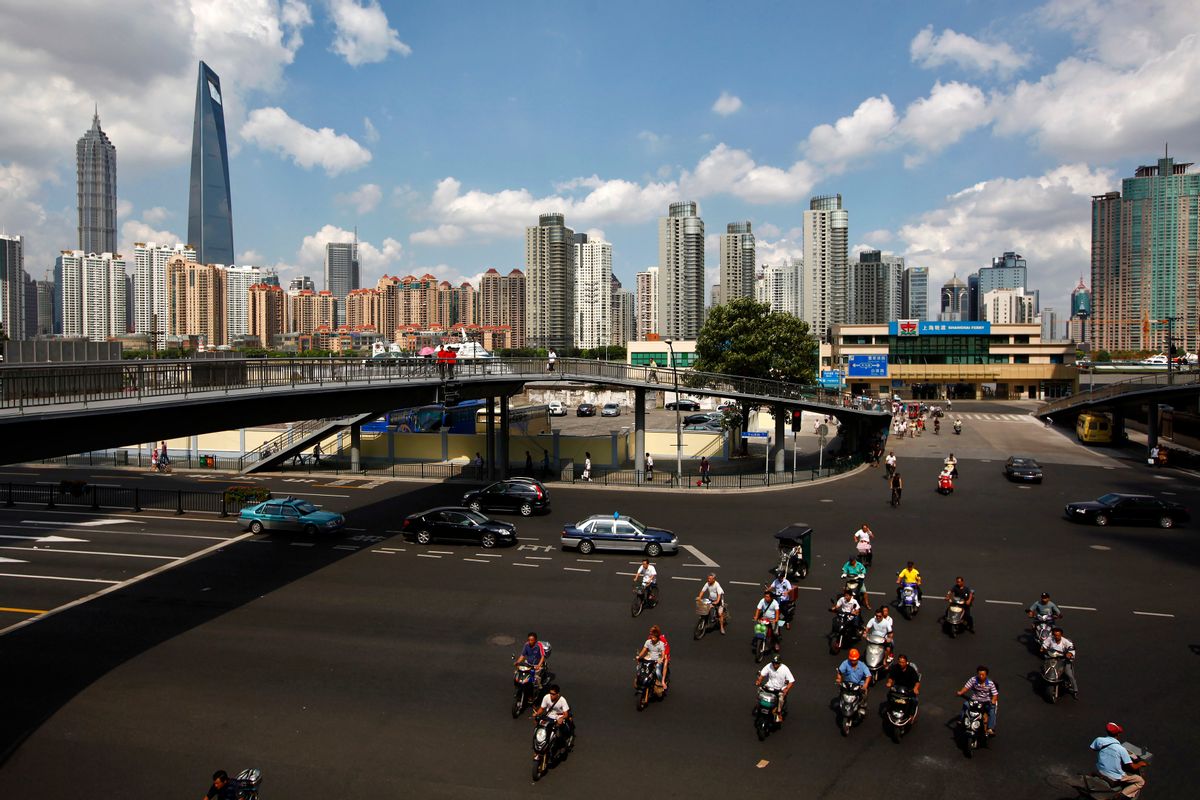 Modern China scoffs at irony. A few hours ago, I stood at the address 76 Xingye Road, in front of the Shanghai building where the First Congress of the Chinese Communist Party met in July 1920. To my left loomed "Corporate Avenue" -- a complex of office towers erected by a Hong Kong-headquartered real estate developer that for the last 15 years has been relentlessly transforming the neighborhood around this hallowed ground into an entertainment-and-dining mecca now called Xintiandi. One of the poorest neighborhoods in Shanghai, the CFO of the developer's China-based subsidiary told us with pride, was now one of the city's most expensive to live in.

What would Mao think? The Resolution on Present Tasks agreed to by the 13 delegates present in 1920 ordained that "the central task of the Party after its founding was to get the working class organized and to provide guidance to the workers' movement." How did we get from there to Corporate Avenue, the development of which required the relocation of some of Shanghai's poorest working-class members -- so they could be replaced by an affluent elite that ranks with the crème de la crème of any advanced nation?

But to even ask the question, I have come to realize, is to miss the point. Not only does no one care (there's just no time for irony in modern China!), but the physical juxtaposition of Corporate Avenue with the birthplace of the Chinese Communist Party is hardly perverse. On the contrary, it is, in its own way, as honest a tribute to one particular strain of Chinese culture as one could ask for. From at least as far back as the Daoist classic "Dao de Jing" all the way up to Mao's seminal essay "On Contradiction," deep-thinking Chinese have celebrated the paradoxical power that is embedded in the clash of opposites.

Did not Lao Zi write:

Seem tattered now, that you can be renewed.

Those that have little, can get more,

To have plenty is to be confused."

Did not Mao write:

Nineteen years ago, I visited 76 Xingye Road for the first time. It just about defies my powers of description to fully express how much the neighborhood has changed in the intervening two decades. Maybe it would be more amazing to see Times Square grow overnight out of the shantytown of South Africa's Soweto -- but not much! Shanghai's overall transformation is just as extraordinarily amazing as everyone says it is. On a night boat ride on the Huangpu River the skyline makes Manhattan feel quaint. But Xintiandi's wholesale reworking of a quiet, rundown French Concession backwater is as disorienting as anything I've seen in my 10-day trip. Of course "Corporate Avenue" is here. Where else could it, or should it, be? How else to make the contradiction more explicit? Somewhere, a Daoist sage is laughing his ass off and Mao is ruefully realizing that he had no idea how true those words he wrote about the new society relentlessly superseding the old were. This is how China works -- by pushing contradictions to their ultimate limits.

On Sunday, I rode a high-speed train on a brand-new line from Hangzhou to Shanghai. Hitting top speeds of 350 kilometers per hour (about 220 mph) we covered the 95 mile distance in 38 minutes ... and then sat in bumper-to-bumper traffic (on a Sunday evening!) for about 45 minutes to get 20 miles or so from the train station to our hotel. More chuckles from the sage: China is building by far the most incredible high-speed railway system in the world at the same time as it is getting stuck in the worst traffic jams. Or how about this oldie but goodie: China is pouring more investment into renewable energy than any other country -- and consuming the most coal.

I can feel my own mind beginning to collapse under the contradictions. While in China I have been reading David Hawke's great translation of the 18th century Chinese classic known variously as "Dream of the Red Chamber" or "Story of the Stone." The story focuses on the fading fortunes of a rich and powerful family with close connections to the imperial court during the Qing Dynasty. Author Cao Xueqin provides endless fascinating snapshots of the incredible aestheticization of daily life indulged in by the wealthiest Chinese during this era. Here's one example, where a member of the family who has become an Imperial Concubine returns to her old home for a visit, in preparation for which her family has completely redesigned their garden.

At that moment a eunuch knelt beside the palanquin and invited the Imperial Concubine to proceed by boat. Stepping out onto the waiting barge she saw an expanse of clear water curving between its banks like a sportive dragon. Lanterns of crystal and glass were fixed to the balustrades which lined the banks, their silvery radiance giving the white marble, in the semi-darkness, the appearance of gleaming drifts of snow. Because of the season, the willows and apricot trees above them were bare and leafless; but in place of leaves they were festooned with hundreds of tiny lanterns, and flowers of gauze, rice-paper and bast had been fastened to the tips of their branches. Other lanterns made of shells and feathers, in the form of lotuses, water-lilies, ducks and egrets floated on the surface of the water below. It would have been hard to say whether the water below or the banks above presented the more brilliant spectacle. Together they combined to make a fairyland of jeweled light.

One is reminded of the Shanghai skyline.

A popular pastime indulged in by the characters of "Dream of the Red Chamber" is the spontaneous composition of poetry to mark special occasions, or just to properly appreciate new features of garden design. Perhaps influenced by the city of Hangzhou, a metropolis that manages to simultaneously pay tribute to the ancient Chinese past while fully embracing hip modernity (in other words: Hangzhou rocks -- my favorite Chinese city so far), I started to feel my own irresistible urge to versification. At the top of the Lei Feng pagoda overlooking the fabulous West Lake, I tried one on for size with the encouragement of Jay Hancock, a reporter for the Baltimore Sun.

A few hours later, we toured the residence of Hu Xueyan, a 19th-century Chinese merchant and banker who rose from poverty to become one of the richest men in China, and set out to prove this fact beyond any possible dispute by spending three years and endless taels of silver building an enormous mansion, complete with incredibly elaborate indoor garden, where his wife, 13 concubines and 19 children could occupy themselves. The building had been heavily damaged during the Cultural Revolution, but has been substantially restored and opened to tourism -- as good a sign as any of the fundamental rehabilitation of the business class in China as you could ask for.

But it's a little crazy-making. While Hu Xueyan was making his millions and gallivanting with his concubines in privacy guaranteed by 30-foot walls, his country was falling apart at the seams, a victim of both foreign imperialism and imperial incompetence. If you had to pick a symbol of national pride, he ain't the likeliest candidate. As we contemplated the extravagance of his garden, Jay Hancock asked me if I felt the urge to poetry. Surprising myself, I blurted:

I don't mean it. Nobody deserves a Cultural Revolution -- a 10-year bout of national madness orchestrated as part of a malign Chairman Mao power play that did incalculable damage to an entire generation, not to mention uncountable priceless artifacts of China's amazing cultural heritage. If I was trying to be ironic, my gesture was yet one more affirmation of why in China, irony is dead.

But if there is one thing that we know about how the process of contradictions working themselves out goes forward, or about the dialectical materialism that says for every thesis there is an antithesis, resulting in a synthesis that is destined inevitably to smash head on into its own contradiction is that it never ends. The more I learn about China today, the more I wonder, what's next? What supersedes this? How long before Corporate Avenue gets its own redevelopment? How long can a command-and-control state manipulate the free market so exquisitely? At what point does the nationwide embrace of Deng Xiaoping's "to get rich is glorious" collapse under the weight of its own internal contradictions?

Already, the brilliance of Shanghai's skyline has been partially dimmed for energy conservation concerns -- or is just plain hard to see when the pollution is thick. Sooner or later, China's growth miracle will stall -- it happens to the best of nations. Maybe that day of reckoning is decades away, or maybe it is just around the corner. China is too big, too complex, and moving way too fast to offer any certainty to our stabs at guessing the future. The best we can do is try to capture the moment, an effort that must include, I am convinced, a willingness to embrace the contradictions. So let's go party on Corporate Avenue. The Daoist master would approve.