He reveals that the issue with rubbers isn't that they protect against disease, but that they prevent pregnancy 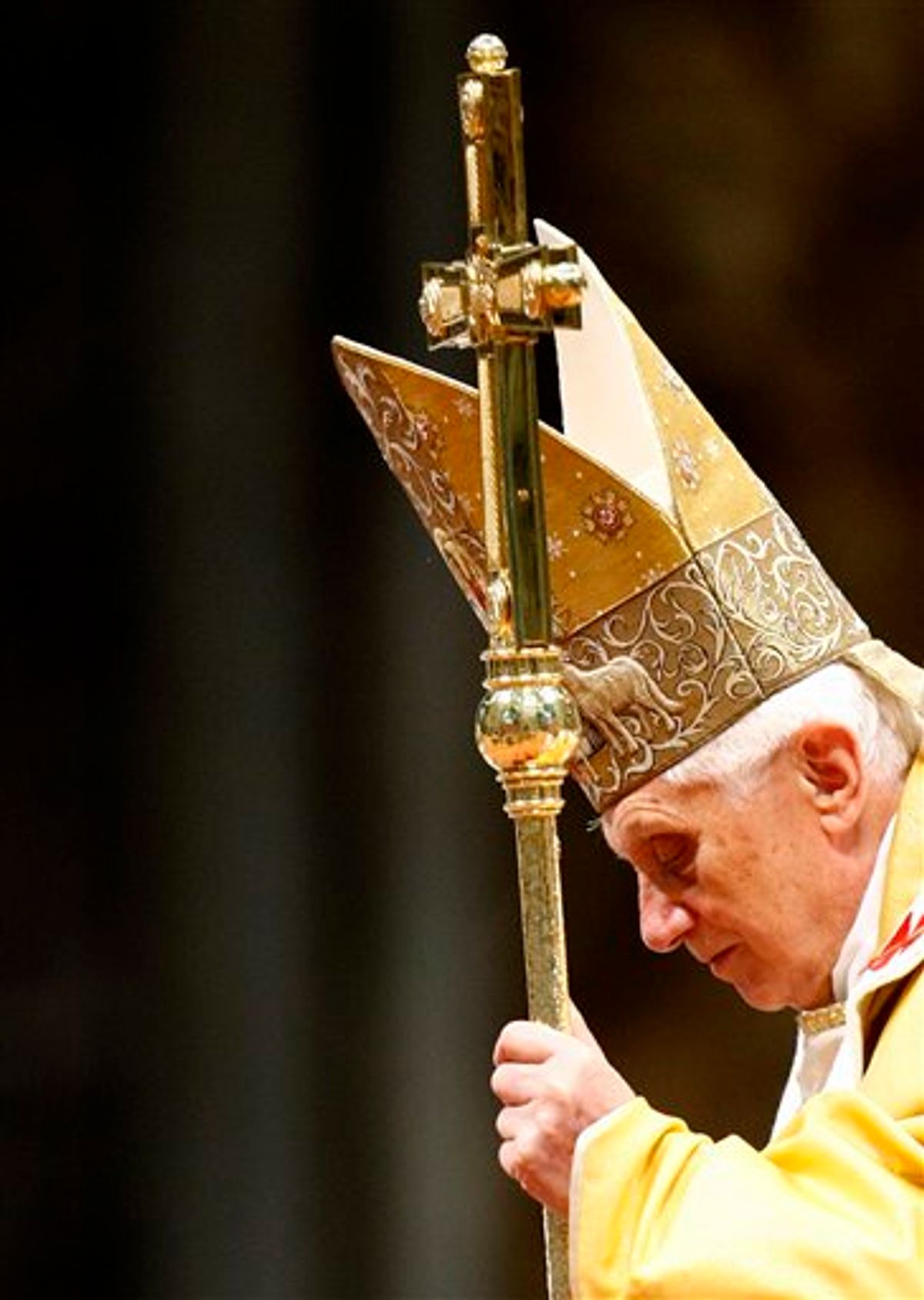 Pope Benedict XVI walks with the pastoral staff during a mass in St. Peter's Basilica, at the Vatican, Sunday, Nov. 21, 2010. The Pontiff formally created 24 new cardinals on Saturday amid cheers in St. Peter's Basilica, bringing a mostly Italian group into the elite club that will eventually elect his successor. (AP Photo/Pier Paolo Cito) (AP)
--

So, the pope thinks it's okay for male prostitutes to use condoms. That was the take-away from a controversy-stoking statement reported this weekend. Immediately began optimistic speculation that Pope Benedict XVI's remark represented a shift in position -- which the Church was quick to deny – and that this rhetorical change might be a real boon to the fight against AIDS. But what I find most interesting about his comment isn't that it represents a shift in position, but that it lays bare the Church's real issue with rubbers: they prevent pregnancy.

Of course, most of us already knew that, but his comment was unusually straightforward and transparent. He made the remark in an interview with journalist Peter Seewald, whose book, "Light of the World: The Pope, the Church and the Signs of the Times," comes out this week. The relevant bit:

There may be a basis in the case of some individuals, as perhaps when a male prostitute uses a condom, where this can be a first step in the direction of a moralization, a first assumption of responsibility, on the way toward recovering an awareness that not everything is allowed and that one cannot do whatever one wants. But it is not really the way to deal with the evil of HIV infection. That can really lie only in a humanization of sexuality.

Presumably he means a male prostitute who services men, seeing as probably even the pope realizes that straight male sex workers are comparatively incredibly rare. Note that he doesn't mention female prostitutes. This isn't a coincidence: I suspect he's saying that condoms are okay in cases where they only prevent disease -- in other words, only when there's no possibility for reproduction. He went on to clarify that he specifically approved of "the intention of reducing the risk of infection" -- infection, not pregnancy.

This isn't to say that he's endorsing gay sex or sex-for-pay; that'll still get you a ticket on the Express Train to Hell. A Church official clarified Sunday: "In this case, the pope does not morally justify the exercise of disordered sexuality, but believes that the use of condoms to reduce the risk of infection is a 'first step on the road to a more human sexuality', rather than not to use it and risking the lives of others." Andrew Sullivan points out that, "in a magnificently perverse way, this teaching privileges homosexuals." He explains, "It's okay for a gay prostitute to wear a condom because he was never going to procreate anyway. But for a poor straight couple in Africa, where the husband is HIV-positive and the wife HIV-negative, nothing must come in the way of being open to procreation ... even if that means the infection of someone you love with a terminal disease." The pope's remarks have interesting implications for homosexuals, but for straight men and women? Not so much.