A virtual hideout for subway flashers

A video of a woman confronting her harasser is making the rounds, thanks in part to a website for "exhibitionists" 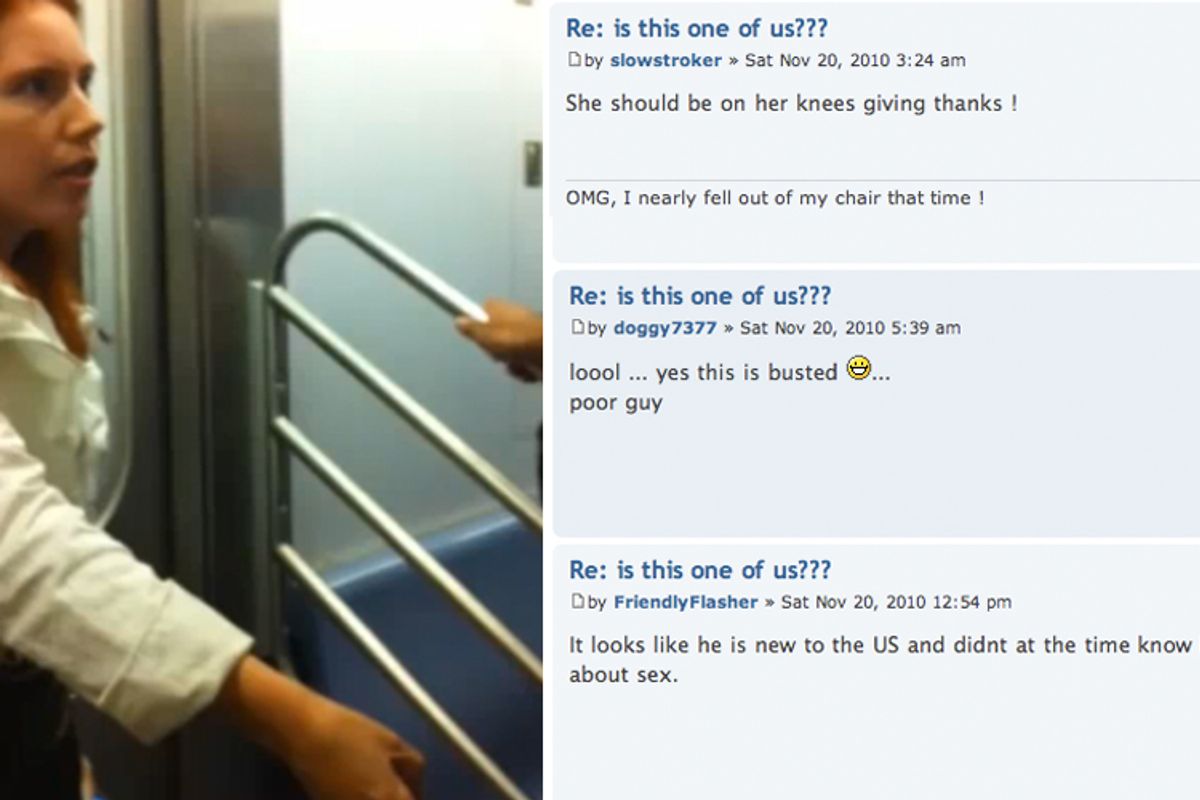 I've spent a lot of time investigating the darkest, dankest corners of the Web, and yet the troglodytes of the online world never cease to amaze me. Case in point: A YouTube cellphone video is making the rounds today of a woman fearlessly confronting a flasher on a New York City subway car. She tosses out expletives, sassy gesticulations and this choice line: "My plans are done for the night. I'm escorting you to the police station. Oh yes. Oh, fucking yes." Curious about the traffic this winner of a video (which you will find below) was getting, I clicked over to YouTube and found that one of the top referrals comes from www.dickflash.com. Naturally, I couldn't help peeking under that virtual rock and watching all the creepy crawlies slithering about.

As you might have guessed, it's a message board site for "exhibitionists." (I put that in quotes because non-consensually thrusting your naked bits on unsuspecting others is more accurately "harassment" or "assault.") A user shared a link to the video and the comments came streaming in ([sic] from here on out): "Wow, what a red headed bitch," "What a bitch she is. She should be thankful he flashed his dick at her," "She should be on her knees giving thanks," "poor guy," "if she doesn't want to see it she can just look away," "It looks like he is new to the US and didnt at the time know how uptight American women can be about sex," "i would rape the fuck out of that noisy bitch." One guy went off on quite the rant:

Fuckin hideous.
She'd be responsible for turning a flasher into a mugger.
How about a punch in nose with that flash.
She's not upset about the flash she's upset that she hasn't been laid in two years and that all he had to do was ask.
LOL

More disturbing even is that some users try to use this as a teachable moment. One says, "I've never understood why some of you dare to try stuff in buses or trains and such, in a situation like this, you are trapped, most unconfortable. (Plus, the women are more likely to react loudly due to the comfort of other people imo)." In other words: Instead, you should only strike when a woman is vulnerable and alone. Another chimes in: "Ok lets point out his mistakes: Subways or local buses must be done with sweats or some form of elastic band, so that when u did get busted its easy to slip back up." Says another:

I've been in situations like this and what you must do is get away quick. Even if it gets a little physical. The guy is clearly stunned, the train is in the tunnel and not moving. She pulled the emergency cord and is calling for the conductor. His escape is only on to the tracks and a fast walk back to the previous station stop. Not a problem for professionals like us but for this amateur he never thought about his escape route.

This gentleman ends his message with "lets be careful out there fellas."

Like I said earlier, none of this should surprise me. I reported a couple of years back on a surge in "upskirting" and online communities where "candid connoisseurs ... swap technical tips (for instance, how to inconspicuously shoot from the hip), legal pointers and advice on how to avoid getting in trouble with the law." Of course the same is true for gropers and flashers. Luckily, the freedom of the Web also means that there are sites like HollaBackNYC, which posts cellphone videos of street and subway harassers, including this very clip. And you know what? These videos have led to actual arrests. So, indeed, be careful out there, fellas.