The extraordinary rise of AMC

With "Breaking Bad," "Mad Men" and now "The Walking Dead," the cable channel is giving HBO a run for its money 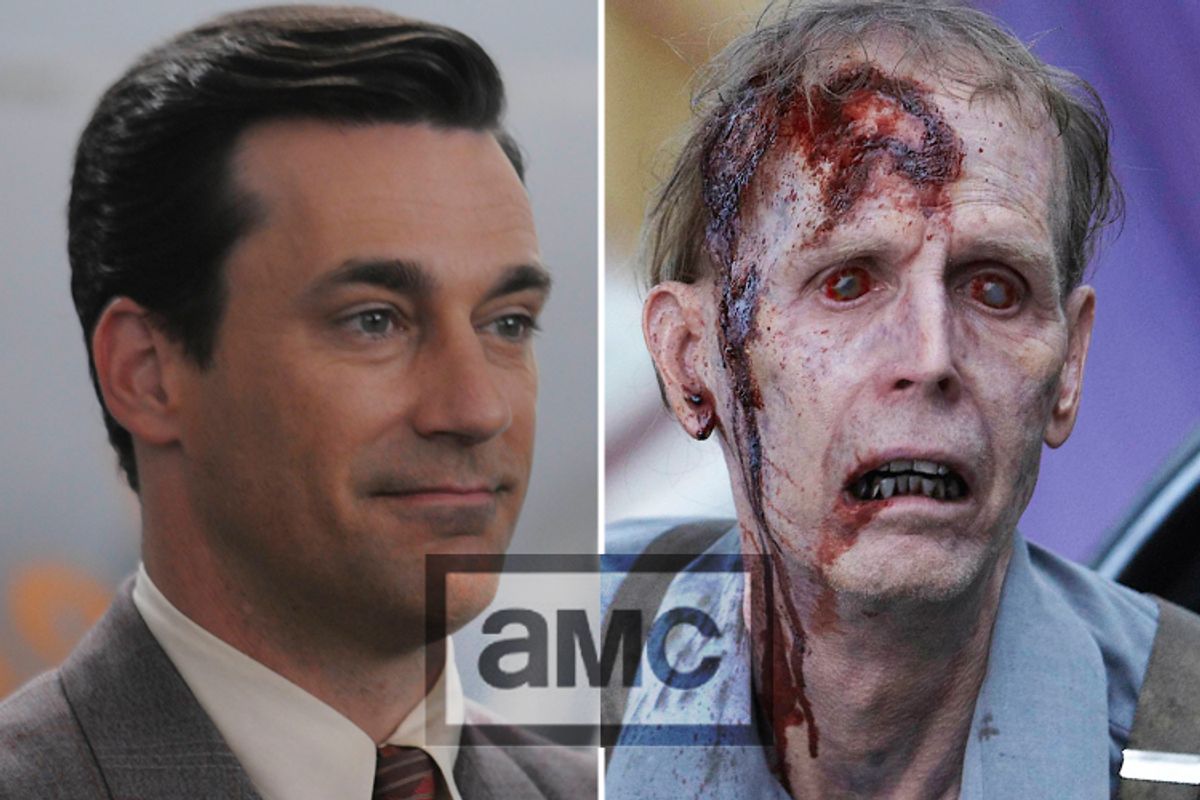 Stills from "Mad Men" and "The Walking Dead"
--

The other night I was catching up on a new AMC series I missed the first time around, the recently-cancelled espionage thriller "Rubicon." I don't know why I hesitated; between its muted, paranoid thriller-esque tone, its uniformly superb performances and its stunningly composed yet never ostentatious visuals, it's a brilliant show -- different from but equal to "Mad Men" and "Breaking Bad."

And did you see what just happened there? I was looking for great series with which to compare "Rubicon,"and I immediately reached for a couple of other AMC shows. The only reason I didn't add AMC's "The Walking Dead" to the list is because it's limited-run, six-episode series, and we're only four episodes into it. But based on what I've seen, when the show returns for a second, full-length season (it's already been renewed), I wouldn't be surprised if I ended up treating its title as a synonym for excellence just like all the others.

If I were spontaneously listing the best dramas on TV five or six years ago, I would have invoked a bunch of HBO titles: "The Sopranos," "Deadwood" and "Six Feet Under," probably. And maybe "Big Love" or "Rome."

AMC isn't the new HBO just yet. But it's getting there.

And that's mightily impressive. About five years ago, when I was a TV columnist for the Star-Ledger, I rarely wrote about AMC, except to gripe that it had abandoned its early mandate to show old Hollywood movies (the acronym used to stand for "American Movie Classics") and was instead showing the same 25 young male-baiting films over and over, diced to ribbons to accommodate as many low-rent ads as possible. (I could have sworn there was a week where every time I turned on AMC, it was showing "Lethal Weapon.")

The network's surprising turnaround has all happened within the last three years. It's based on scripted dramas aimed at adults, all of which hew to a few basic principles.

First, AMC's rather pretentious motto "Story Matters Here" is not just a designer label. They mean it. They mean it so much that they could change their motto to "Short Attentions Spans Not Welcome."

The multiple Emmy-winning "Mad Men," "Breaking Bad," "Rubicon" and "The Walking Dead" are all novelistic series with season-length interlocking narratives. Once in a while an AMC series gives you an episode that could function as a stand-alone, like a little short story. I'm thinking of the "Mad Men" episode "The Suitcase," or the "Breaking Bad" episode "Half-Measures." But both are a far cry from what you'd see in the old days of TV, where individual episodes were designed as one-offs by default -- and even episodes that seem as though they could stand alone as little movies derive much of their power from the slow accumulation of detail over the course of a season, or several seasons.

HBO perfected this format in the United States in the 1990s (it was common in other countries, notably the U.K., long before that). But it seems to me that AMC has consistently gone further. Each season of an AMC series really does feel like a novel, or an incredibly long movie with an over-arching narrative. If you came in halfway through a season, you'd have no idea who anyone was, what was happening or why you should care. The network seems OK with that, perhaps because it understands that the initial run of a commercial cable series is really just a glorified P.R. campaign for video-on-demand by way of your local cable provider, Amazon and other sources -- and of course DVD sales, which may be supplanted by downloading someday but are still moneymakers, especially when a series is handsomely photographed enough to be a sensible purchase on Blu-ray. All of AMC's shows fit that description, especially "Mad Men" and "Rubicon," which are more attentive to composition than all but a handful of big-budget Hollywood movies. "Rubicon" might be the most visually intelligent series on American television, using doorways, window frames, walls and pillars to suggest the boundaries separating one character from another, or one faction at the intelligence agency from another.

Second, AMC's dramas define "adult" somewhat differently than other cable channels (commercial or premium). As I wrote in a recent Salon article about "adult" movies, the word has been mishandled and devalued. The word "adult" shouldn't be about visual or aural content so much as themes and psychology. It shouldn't mean "blood and boobies," but "situations that kids aren't mature enough to understand or care about."

HBO's shows have often prided themselves on being R-rated, sometimes borderline X-rated, and featuring copious amounts of profanity, sex, nudity, drug use, spectacularly brutal violence, or some combination. Inspired by HBO's critical and Emmy success (and the near broadcast-network-level ratings for series such as "The Sopranos" and "Sex and the City"), rival cable channels went in the same direction. Showtime often seemed to suffer from an HBO inferiority complex, and dealt with it by making shows where the language was nastier, the sex raunchier and the violence positively stomach-churning. (Brilliant as it is, there are times when Showtime's charnel house melodrama "Dexter" seems an attempt to make HBO executives look at the competition and exclaim, "Now that's a bit much.") FX's foray into so-called adult drama is of a piece with the tabloid mentality of its corporate parent, News Corp.: "The Shield," "Rescue Me" and other signature series often felt as if FX executives had watched HBO for a couple of years and said, "I get it. What people want to see is extreme behavior, the kind of thing that makes you jump out of your seat and yell, 'Holy crap, I can't believe they just showed that!'"

That's part of the appeal of pop culture, of course, and always has been: the P.T. Barnum effect. But the great HBO series balanced prurience with literary and cinematic ambition. AMC is doing the same thing, but the emphasis is more on the second half of the equation. Yes, you sometimes see things on AMC that you wouldn't want to have to explain to a 6-year-old who happened to wander through the room: The lawnmower scene in Season 3 of "Mad Men," for example, or in Season 4, Don Draper getting slapped during sex with a prostitute or getting oral sex from a woman in the back of a taxi; or the drug trafficking and violent threats strewn throughout any given episode of "Breaking Bad"; or the intense but inherently unreal sci-fi gore of "The Walking Dead."

At the same time, though, AMC's shows just don't have the same "Let's see how far we can go" ethos that seems to have driven HBO and its blatant imitators in the '00s. That's partly because they're a commercially supported channel; it also seems to be an aesthetic choice. The channel allows almost every kind of profanity except the F-word, which it bleeps; but by and large, the language on AMC shows isn't as salty as what you'd find on HBO or Showtime or even FX. The attitude toward sex and violence is just as measured. Violence is rare on "Mad Men," and when it happens -- as in the lawnmower episode -- it's more shocking because it's not normally a part of that world. Sex is mostly implied. And when it's shown, it's R-rated in physical frankness (you're never in doubt as to what acts are being performed) but PG-13 in terms of how much skin you see and how long the scene typically goes on.

"Breaking Bad" is tense and upsetting more because of the emotional or ethical implications of what you're seeing (for instance, a middle-aged man thinking about killing his surrogate son for business reasons) than for the amount of killing, drug use or other criminal activity. "The Walking Dead" seems more violent than it really is; the gore is up to contemporary zombie film standards, but it's deployed sparingly and never lingered on; and in any given episode, two-thirds to three-quarters of the plot will concentrate on the interaction between mortal characters, with nary a ghoul in sight. And while "Rubicon" is suitable for kids in terms of what it shows and says, its storytelling and dialogue make it kid kryptonite. Unless you know a fair bit about U.S. history, foreign policy, current events and the organization of the federal government, you'll find it dull, maybe mystifying -- but if you are interested in those things, it's a dream come true, a show that seems to have been made just for you.

All in all, these AMC series remind me of American movies made in the early-to-mid-'60s, when Puritanical content restrictions were starting to break down and commercial films were embracing a new frankness, but filmmakers hadn't yet gone into the "anything goes" mode that dominated the final quarter of the 20th century; think of "The Manchurian Candidate" and "Seven Days in May," "Who's Afraid of Virginia Woolf," "The Pawnbroker," "Faces" and the original "Night of the Living Dead." The content of HBO, Showtime and most FX series recalls R-rated films made from the mid '70s through the early '90s, when going to the movies meant there was a good chance you'd see a gruesomely sadistic torture scene or hear dialogue in which every other word started with "F." There's nothing innately wrong with that -- some of the greatest films ever made in this country are exceptionally violent, profane and sexually frank. But as mid-'60s American film demonstrated, there's more than one way to be "adult." AMC seems to have realized this and embraced it, and it's one of the reasons the channel is flourishing.