"Dancing with the Stars" recap: Jennifer Grey finds her groove 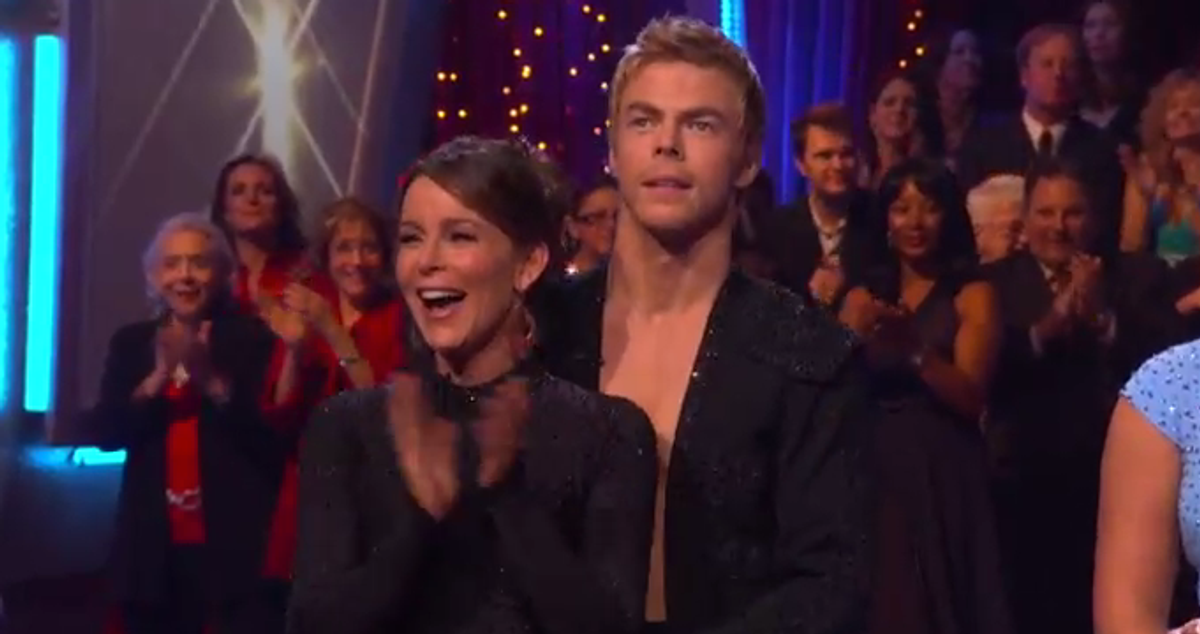 Jennifer Grey (L) on last night's "Dancing With the Stars"
--

I suppose I should be happy. This time last year, there were perhaps three people in America still tuning in to "Dancing with the Stars," many viewers having abandoned the show after Kate Gosselin was mercifully put out of our misery a few weeks before the finale. This season, the only reason most people are still watching is to see the O.J. Simpson-esque white bronco ride of Bristol Palin's unlikely success, an unexpected spectacle which is confirming my long held fear that we have finally abandoned proficiency and talent in deference to something squishier -- like "relatability," affinity, rewarding mild improvement or outright pity. I know these are broad conclusions to reach based on the results of a dance show which skews older and Republican (yet with ironically socialist tendencies), but I'm doing it anyway. Because I'm not happy.

I grew up in a time where we were taught to believe that greatness could be achieved if you identified your talent, worked hard at that talent and didn't give up. Those who tried hard and failed were admired for their tenacity and grit, but they were still handed the green 6th place ribbon and told to find something else to focus on. I know that "stars" are not placed on this show because of their dancing talent, but rather because they are, or have been, "successful" enough to have garnered the attention of lots of people for SOMETHING they've done, but I never imagined that one of the least objectively interesting people could rise to the top of the competition based partly on the fact that her success is so unlikely that we are somehow compelled to make it happen.

I know many are voting for Bristol because she is this season's "underdog" (a questionable motive in its own right), but I'm guessing they're dwarfed by Americans who are voting to drive home the message delivered this past election -- whatever that "message" is. "Do you get it?" the President was asked over and over again after his midterm defeat, "do you REALLY get it?" I don't know if he does, but I sure don't. I know that people are angry and scared and uncertain about the future, but how Obama became the cause of our woes and Sarah Palin became our savior I'm still not clear on. And how we decided that her daughter winning "Dancing with the Stars" would further drive this ill-defined message home is more confusing still.

Propelling Bristol to the "DWTS" finals for non-dancing reasons may have given her supporters a giddy high -- but I hope they are prepared for the hangover. As I watched Brandy's face when she was ousted last week, I saw more than just disappointment; I saw the sickening realization that working her hardest, doing her best and pouring heart and soul into this competition was a waste of time. How could she not feel that she's living in a country that has started punishing people like her for the qualities America was built on, solely because those qualities might make the rest of us feel less "special" -- or worse yet to drive home a totally unrelated political point?

As we go into the finals of the most watched television program in the country, and decide who is going to take home that mirror-ball trophy, I hope audience voters think long and hard about the message they're sending, or the point they're making, and determine whether the societal price we're paying is worth it.

Or not. This isn't North Korean nuclear proliferation or anything.

For the finale, each couple was assigned a "redemption" performance -- a re-do of a dance that the judges felt they should have excelled at but didn't. Their second dance was the much anticipated "freestyle" where they break out and let loose in any way they want -- usually the most entertaining dance of the season.

Kyle and Lacey were asked to re-do their '70s foxtrot -- the notorious "atrocious" dance that made Len birth a mad cow on stage and led to Kyle's lowest paddle of the season -- a hard to come by "5."  Luckily for them, Len joined them during their rehearsal segment to explain how to make things right --which is to focus on technique. It's always been technique with Kyle.

I can't speak to that technique in any substantive way, but the dance started off slowly (probably because foxtrot footwork is so difficult to master) so he could make sure not to upset Len. Unfortunately, that took away the one great advantage he has over Jennifer and Bristol -- his unbridled joy on the dance floor and the enthusiasm it evokes in the viewers who need to vote for him. The dance picked up later, and included some truly impressive side by side steps with the devilishly sexy Lacey but judges were still more tepid in their reviews than one wants in the finals.

For the freestyle, Kyle went for it -- dancing a non-stop, hip-hop tour de force to a strange song called "Tootsie Roll." What's remarkable about Kyle is that he seems to be able to do things that his doughy body should not be able to do -- a testament to his incredible personal charisma, energy level and desire to win. From the beginning, he has been the crowd pleaser -- and given the reaction in the auditorium and my inability to stay still while he was shaking it, he did what he needed to do to secure a real chance at winning.

Unless of course what I said about older, Republican voters ends up being true. Then he's screwed.

Bristol's redemption dance was the unforgettable monkey jive -- the "jump the shark" performance that, although her most embarrassing dance of the season, may have just triggered enough voter sympathy to get her this far.

Bruno joined her and Mark in the rehearsal segment to get Bristol out of her head and into her body. Since her technique is not going to get that much better, her only hope is to transform her Eeyore-like aura and finally discover the joy in what she's doing. Then again, who knows if that would serve her well with audience voters or not. I sure as hell don't know what they're responding to.

As usual, her feet and legs looked like they were weighed down, and at times she didn't seem 100 percent certain where they were supposed to be, but it was once again an improvement. On top of that, she genuinely seemed to enjoy herself on the dance floor, another small step in the right direction. But, as has been said a million times already, neither improvement is close to being at the level this stage of the competition should demand -- even though the judges continue to score her like she is a recipient of dancing's answer to affirmative action.

The freestyle rehearsal segment played to Bristol's only strength -- her complete lack of belief in herself and the self-conscious certainty that she will fail because of "all the haters out there". She hit all the right notes to secure her voting block -- by admitting that she had never been to a Broadway show and didn't have the personality to pull off the "Chicago" number that Mark chose -- all while pulling her shirt down over her hips constantly to hide her body. And then vowing to overcome every hurdle just to "prove them wrong." Every woman of a certain age in America will relate to how she feels and every dad of daughters will want to protect her. If she doesn't totally blow it (or maybe even if she does), she's done what she needs to do to have a real shot at bringing the trophy home.

The actual dance was a bland, poor imitation of a Bob Fosse number. And totally irrelevant.

Jennifer's redemption dance was the paso doble, a performance that was the lowest point in her journey when her body and will to win seemed to abandon her at the same time. Carrie Ann joined the rehearsal segment to help Jennifer elongate and smooth out her movements -- the kind of refining that indicates how far advanced in her dance technique and stage presence she is compared with the other two.

"This is the meaning of redemption," said Carrie Ann when it was through. Jennifer is on fire -- finally having found the groove that we expected of her from the very beginning of the season. The paso was intense, dramatic, technically flawless and jaw-droppingly entertaining.

Jennifer's freestyle was long on tricks that almost hit, but didn't quite elevate to the level of Kyle's full on assault. Most of this was due to her physical limitations, but Derek is also to blame. He has set the bar so high every year with his show-stopping numbers that anything short of Jennifer trapezing from the ceiling would be considered a let-down.

Of course that's just my take on things. Judges went bananas for the whole thing and gave her the fourth consecutive perfect score in a row.

But tune in tomorrow to see if Bristol can snag the mirror-ball trophy after the last two dances are done (the final sign that end of days are truly upon us). I will be stacking up on supplies just in case.

Abc Dancing With The Stars Television