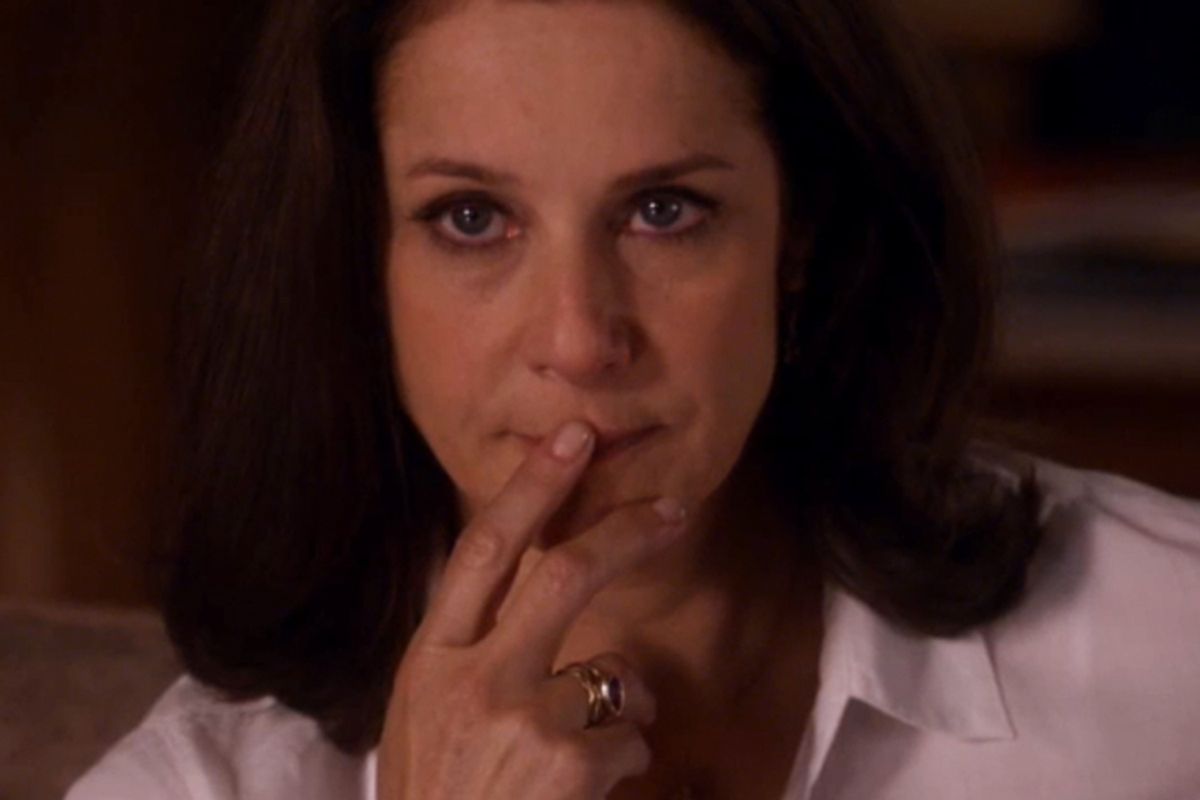 Debra Winger in "In Treatment"
--

Tonight there are no glimpses into Paul's life. I'm not sure why this is. Maybe so that we can start the Adele session on the same sexually charged note it ended last week? Or maybe because Paul's problems will seem pretty inconsequential next to Sunil who is going increasingly mad with grief.

Sunil is in the waiting room fiddling with a radio, trying to get BBC International for news about a monsoon that has been raging for days in the village where his parents were raised. He complains to Paul about the impossibility of getting news in basketball-obsessed New York. It amazes me that a fiftyish math professor from Calcutta would not know about this thing called the Internet, but the show seems set on creating this very ambiguous, anachronistic character with vaguely rural roots who is obviously deeply depressed, suffering from culture shock, and genuine despair over a terrible disaster that may be killing aunts, uncles and cousins -- but may also be plotting, by implication, some kind of honor killing.

It's a disturbing episode on many levels. Arun has left for several days on a medical conference and Julia has let it be known that she doesn't want to be alone with Sunil. Paranoid about Julia and the Pale Fox, Ethan Barr, Sunil believes he hears them laughing about him on their way out to another evening event  (Do New York agents really spend this much face time with their clients? Or are Sunil's suspicions somewhat justified?). He talks about wanting to "smother" her laughter, and Paul grows alarmed. Later Julia strokes Barr's face when saying goodbye, and Sunil thinks he hears her locking her bedroom door. Sunil is incensed on Arun's behalf. Julia is "humiliating" his family. He has a nightmare about protecting them from some dark haired woman. When he wakes up, he goes to check on his grandchildren and then out of curiosity checks to see if Julia's bedroom is indeed locked. It is. Paul confronts him on what he would have "done" if the door hadn't been locked. Sunil doesn't say. My money would be on the probability that he was going to look at her again, like he did last week when he watched her and Arun sleeping. Or maybe even not open the door. I don't think he would have killed her.

I'm basing this on some informal research, since I don't like assuming someone is capable of murder just because of my spotty North American knowledge of his culture. From what I read last week, honor killings in contemporary Bengali culture are rare to non-existent. According to Human Rights Watch, it's a serious problem in the north of the country, not in the south, where Sunil comes from. The region does, however, lead India in suicides. Even if it didn't, over the course of four sessions Sunil has mentioned two, the man who strangled himself with the feces smeared sari of his aunt, and Melini killing herself, Virginia Woolf style, with Sunil's coat.

Interwoven with all his menacing, but possibly figurative language, are all the classic signs of someone who is a high suicide risk, in particular Sunil's deep feelings of helplessness and his stubborn tunnel vision. Paul obviously senses this since he has told Sunil to call him anytime of the night and urged him to come more often. But the really classic pre-suicide sign, as we learned with Alex two seasons ago, is a sudden suspicious sense of renewed optimism and drive.

Next week is the penultimate episode. My guess is that we will learn what Sunil means when he says, "you have no idea what my life has been like." This hints at some deeply shaming secret he has been carrying around. But if Sunil walks in and out of that office looking like he suddenly has a new lease on life, that's when I'm really going to start panicking.   I wish I could care this much about Frances. As her episode opens, she is finding it difficult to tolerate a few moments of silence with Paul. Perhaps this reminds her of the emptiness inside her, the place where people normally keep their souls.

Are the TV gods punishing me for last weeks request for more "In Treatment" sex talk? Do I really want to hear about how Frances finally got laid? This, right after her daughter texted her that she should go see her dying sister, Patricia, who "looks like a skeleton." Yes, sadly, I do because it's hard to ignore the magical way Gabriel Byrne pronounces the word "breasts." There are many reasons to repeat this word. Frances takes delight in the fact that the 25-year-old cast member she followed home still likes hers. There are tests results that Frances hasn't had the courage to read yet, but she insists no matter what they are, she's not having that double mastectomy, even if it leaves her daughter motherless. Paul reads the results, which are negative. They rejoice.

And then we find out that avoiding discussion of the test has all been another excuse to avoid seeing her dying sister. Because, of course, now that she's going to live, she can't possibly visit her because that would be like rubbing it in her face.

"You're very angry with your sister," Paul observes. Frances counters, nastily, with what she thinks is a huge dramatic revelation. Her sister was in love with Paul! Yes, just like every female patient he's ever had, even without a reason for Paul to keep saying breasts. Paul tells her she needs to see Patricia before it's too late. Frances runs out. Where? Who cares if it's not to her sister's bedside?

Please TV gods, if you're listening. You can take the sex talk back in exchange for one week without Frances and a double session with Sunil. To show my good faith, I'll  sacrifice "Sarah Palin's Alaska" for the rest of my life, and not watch the Ponderosa bonus online scenes from "Survivor: Nicaragua."   Although just to be clear, this covenant would obviously only take effect next week, after tonight's session with Adele. And, yes, I know he's not real, but please keep an eye on Sunil, and watch out for his fictional monsoon-stricken family.