Why we should focus on Wall Street, trade deficits, infrastructure and jobs -- not the debt and global warming 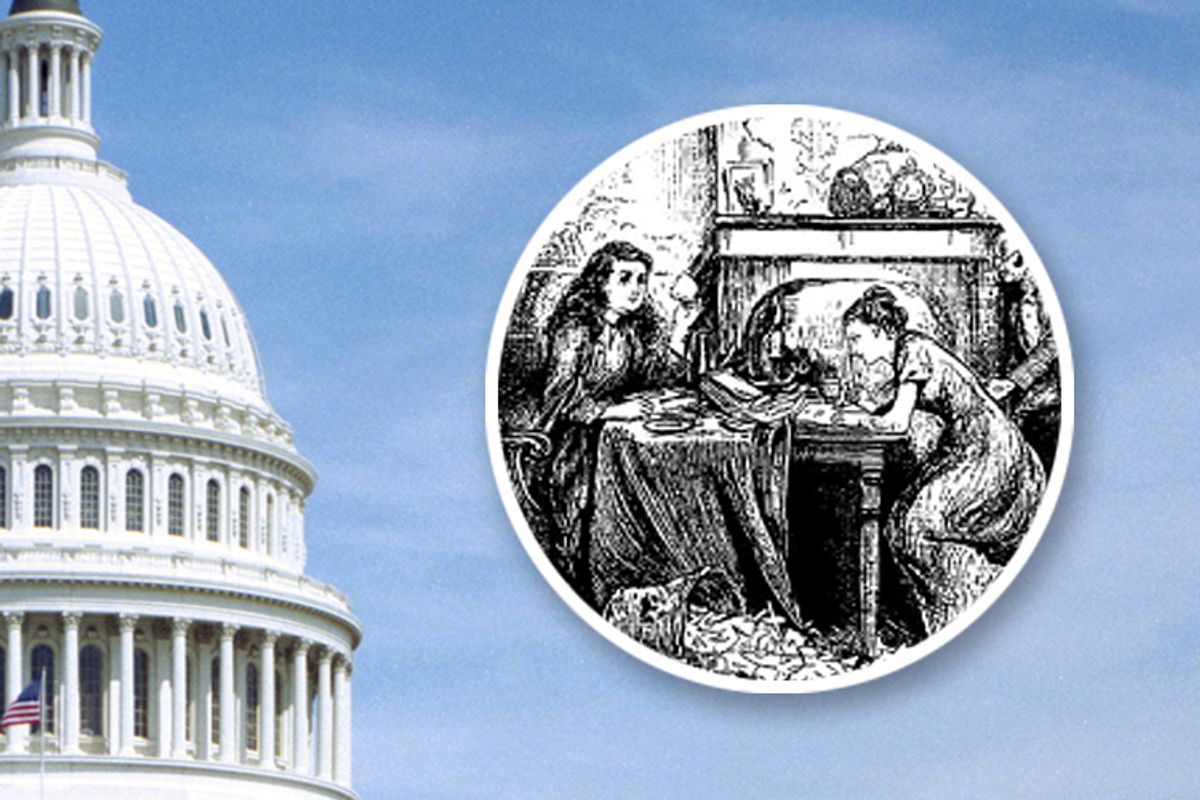 If any fictional character symbolizes the present moment in American politics, it is Mrs. Jellyby. In Chapter 4 of his novel "Bleak House," Dickens introduced readers to this "telescopic philanthropist," who devoted herself to long-term projects intended to help people in distant continents in remote futurity, while failing to notice the chaos in her own household.

There is a specter haunting Washington, and it is the ghost of Mrs. Jellyby. Unemployment remains high. Vast amounts of capital as well as labor that could be employed in essential projects like infrastructure modernization remain idle. The trade imbalances and financial deregulation that contributed to the global economic collapse since the Depression have not been adequately addressed. And the U.S. remains mired in a war in Afghanistan with no evident exit strategy.

Confronted by these immediate crises, how do many of our leaders and activists respond? By changing the subject to problems that may or may not exist in 2075 or 2100 A.D.

Our Mrs. Jellybys cannot be bothered to focus on trying anything and everything to put Americans back to work. The unemployment crisis fails the test of Jellybyism: It exists in the present and it is a challenge at home. Instead, the telescopic philanthropists of the Beltway are focused on dangers that are appropriately remote -- the size of the national debt and the temperature of the Earth’s atmosphere in 50 or a hundred years.

If the Mrs. Jellybys among the deficit alarmists of the right are to be believed, Franklin Roosevelt was irresponsible when he threw himself into combating unemployment and then winning World War II. Had he been truly responsible, FDR would have put those problems on the back burner in order to focus on trying to fine-tune the federal budget in 1965 or 2010 in advance.

Progressives have Jellybys of their own. The energy on the left that has gone into the urgent and immediate priorities of combating unemployment and promoting public investment is dwarfed by the passion that liberals have put into environmental crusades. Green activists compete to make YouTube videos to publicize the need to prevent global warming. They campaign to tax plastic bags and to raise energy prices to justify subsidies for renewable energy. What if some of that effort went into campaigns for extended unemployment benefits and public sector job creation and a living wage? But telescopic philanthropists can never be bothered to save the country when they think they can save the planet.

One is a naive faith in computer models. They do not believe it is enough to say that excessive deficits and debts might be a problem at some point, or that gradually reducing the amount of CO2 pumped into the atmosphere might be a good idea -- two assertions on which most informed people can agree. No, there must be models and charts, showing, with impressive if spurious precision, the exact moment 30 or 50 or 90 years from now when Medicare consumes the entire federal budget or the Earth's climate has warmed by a certain number of degrees. To be taken seriously in Mrs. Jellyby's Washington, you must be armed with a chart showing this or that line dangerously veering up and becoming nearly vertical -- not in the next few years, to be sure, but in the next few decades or maybe the next few centuries.

In addition to their faith in charts and models, the neo-Jellybyites of our day have a belief in planning by experts and a contempt for legislatures reminiscent of communism, Fabian socialism and other forms of 20th-century collectivism. This faith in technocratic planning on a time scale of generations is shared by the deficit hawks of the right as well as by many climate hawks on the left.

The premise of the president's deficit commission is that a democratically elected legislature is too focused on the near term and the interests of constituents to inflict the pain necessary to assure the triumph of socialism -- er, fiscal responsibility in the next 50 or a hundred years. The power to make policy needs to be taken away from legislators accountable to voters and given to independent, bipartisan politburos -- er, commissions, with a rubber-stamp Congress reduced to voting an entire program into law without the right to question or alter it.

Why tolerate the existence of legislatures at all, if they repeatedly fail to inflict the pain on the American people that budget alarmists and climate campaigners insist is necessary to save the fisc or the planet in the remote future? Why not simply dismiss Congress with a whiff of grapeshot? We could have a new constitution, in which an elected dictator, the president, would appoint bipartisan commissions full of really smart people, whose recommendations for fixing the U.S. budget of 2075 or the global climate of 2085 would immediately become law.

And the urgent problems we face in 2010? Mrs. Jellyby might say that those should have been fixed 50 years in advance, back in 1960. Now it's way too late. According to telescopic philanthropy, the problems of a time can never be addressed in that time itself.

Perhaps we have gone too far in praising statesmen as "far-sighted." Thanks to the cult of far-sightedness, the political equivalent of the malady known as "hyperopia" -- an ability to see things in focus in the distance but not nearby -- is now taken as a sign of superior responsibility and intelligence. Maybe we need less hyperopia and more myopia in public policy.

For my part, I would rather be governed by Mr. Magoo than by Mrs. Jellyby. For those too young to remember, the cartoon character Mr. Magoo was an old man who stubbornly refused to get his failing vision corrected. Perpetually misperceiving his surroundings, he wandered through the world narrowly avoiding one accident after another. He could not see the wrecking ball heading toward him, but at least he could see the plank at his feet that would lead him across a hole at the last minute to safety.

Mrs. Jellyby can see the far-off wrecking ball and she is correct in thinking that it could be dangerous. But she needs to focus on the plank.