Is this how they stop Sarah Palin? 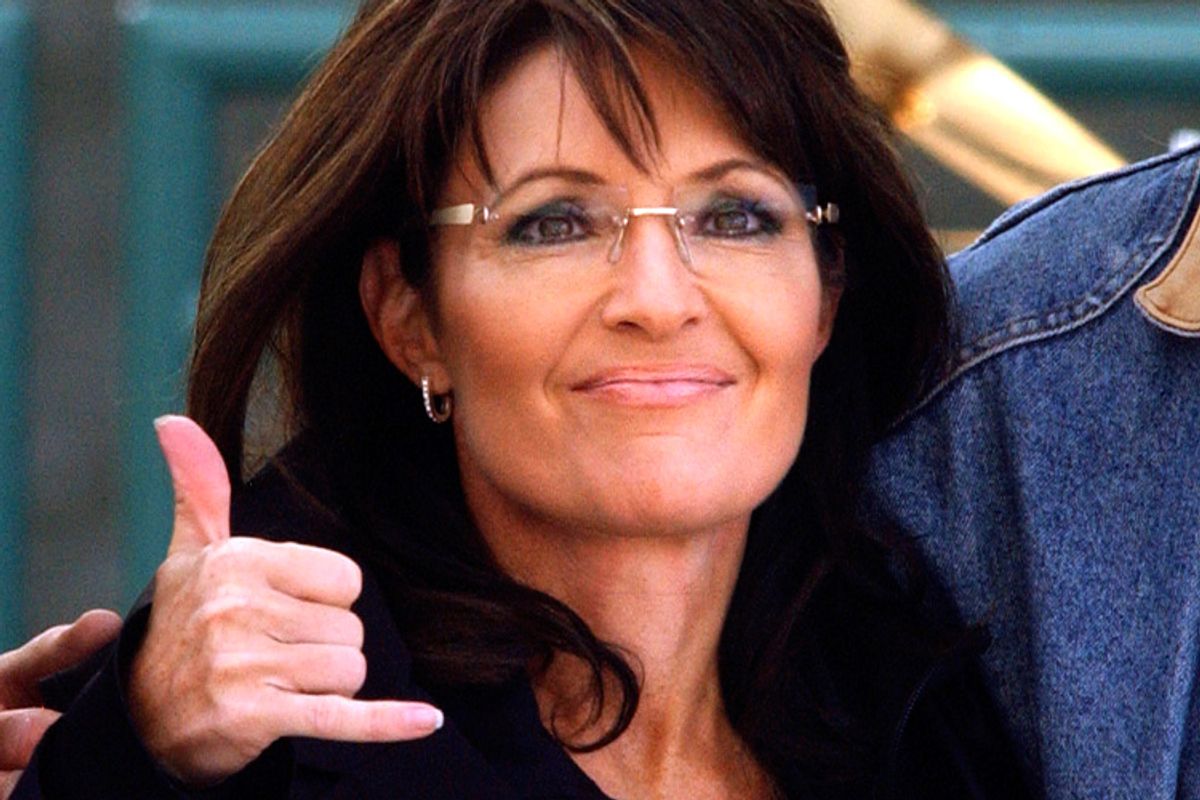 David Frum believes that Matt Labash's Weekly Standard review of Sarah Palin's new reality show, which Labash dismisses as a narcissistic venture not befitting of a potential White House aspirant, as evidence of "the Republican establishment’s increasingly frantic search for ways to stop the Palin for President campaign."

Frum is on to something here: If Palin is going to be stopped -- and she absolutely can be -- it will have to come through the handiwork of conservative media outlets and opinion leaders. For more than two years, we've seen the effect that consistently critical coverage from the "lamestream media" -- not to mention overt hostility from just about every left-of-center commentator -- has had on Palin's poll numbers; the GOP base has rallied around her, while just about everyone else has turned against her. Thus, she is right now a very viable candidate for the GOP's presidential nomination in '12 -- even as her image with general election voters is so negative that she'd be in position to blow a winnable election for her party as its nominee.

The problem for any establishment Republican who wants to make this point now is that he or she is likely to be branded a sellout. Remember what happened to Karl Rove when he dared to do his job -- he's supposed to be a political analyst for Fox, remember -- and suggested on the air that Christine O'Donnell's nomination in Delaware meant that Republicans would probably lose a Senate seat they had been set to win when Mike Castle was the front-runner? He was right, of course, but the GOP's base wasn't interested in hearing it, and Rove got no cover from any of the voices that the base now listens to. Within a day or two, he was backtracking and pledging his loyalty to O'Donnell.

With Palin and '12, Rove (and plenty of other establishment Republicans) sees another O'Donnell in the making. Hence his decision to publicly question whether Palin's Discovery Channel show reflects the kind of gravitas Americans want in a president. What's notable about Labash's piece is that Rove is getting some cover this time. The Weekly Standard, after all, is Bill Kristol's magazine, and Kristol played no small role in nudging Palin onto the national stage to begin with.

Palin's poll numbers with the GOP base will only ebb if base voters are exposed, more than once and from more than one voice, to criticisms of her. They don't have to be harsh, Frank Rich-esque denunciations; just gentle but insistent reminders that maybe she's not suited to represent the party on its national ticket again.

This is a delicate task, obviously. As I've written, the GOP base has rarely been more eager to defy the party establishment than it is today. There is a strong temptation among conservative voters to label inconvenient information the product of the liberal media, or of RINOs. A negative review of Palin's show from one Weekly Standard writer is noteworthy, but by itself won't do much. Will Rush Limbaugh ever weigh in and say, "I love Sarah Palin and I hate what the liberals have done to her, but I'm just not seeing her as the nominee"? Will hosts on Fox News, her current employer, start conveying this message? Will Fox's "straight" newscasts begin touting stories that play up her general election vulnerabilities?

Remember, too, that Delaware Republicans were warned that nominating O'Donnell would amount to general election suicide, but they went ahead and did it anyway. And I'm guessing most of them would say they don't regret it, either, since they were convinced that Mike Castle represented everything that had gone wrong with their party, and with Washington in general. The "Stop Palin" crowd, in other words, will need to have an ideologically acceptable alternative to point to if Palin does run in '12. If Palin's main foe is Mitt Romney, author of the Massachusetts equivalent of "ObamaCare," she might be able to convince the base to ignore the warnings about her; this might be O'Donnell-Castle all over again. But if the main alternative has real Tea Party credibility, it might not be as hard to convince the base to give up Palin. Maybe Mike Huckabee will play this role. Maybe John Thune. Maybe Chris Christie. Time will tell.

For now, Frum is right: There are some signs that some elements of the GOP establishment that have been friendly to Palin in the past are getting worried.