Three deaths blamed on storm so far; tens of thousands are without power in Washington region 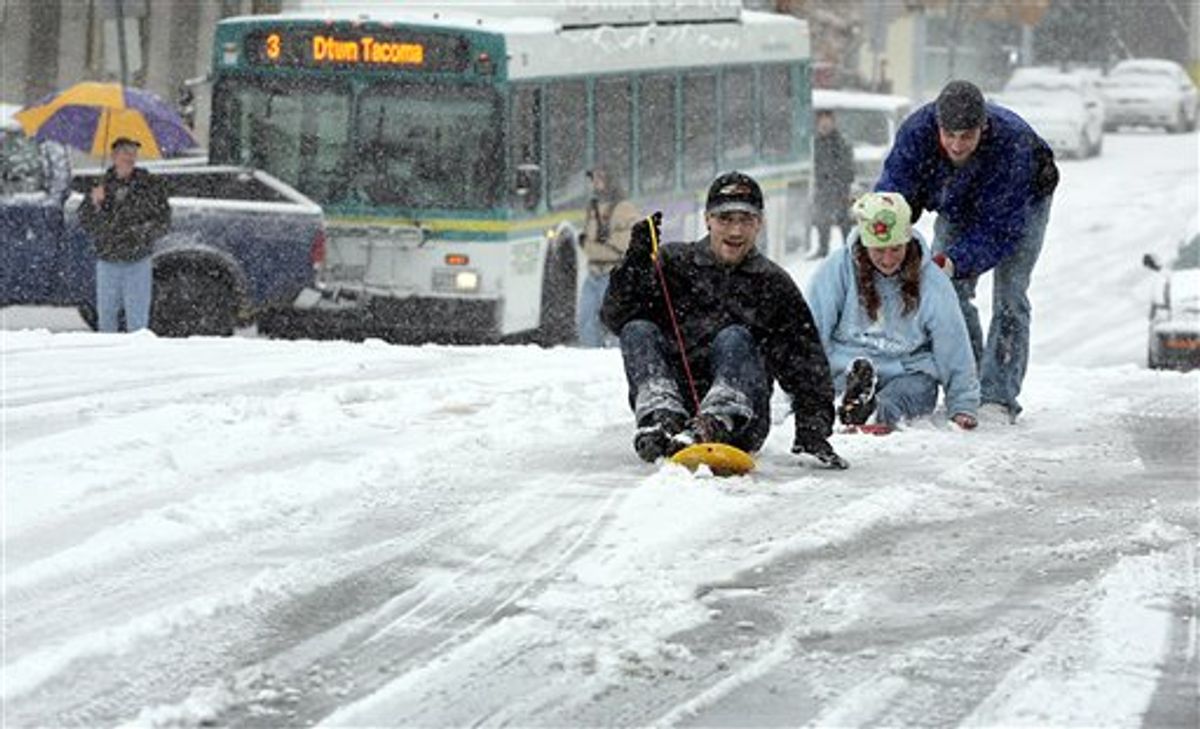 From left, William Gordon, Jessica Fuller and Howie West, make use of alternate forms of transportation after South Ninth Street became unsafe for many vehicles in downtown Tacoma, Wash., Monday, Nov. 22, 2010. A few minutes earlier the Pierce Transit bus, background, slid into a pickup truck. People in most of Eastern Washington were told Monday to prepare for a rare blizzard as the first severe storm of the winter blasted through the state, though weather officials said it was too early to tell if the rough weather would affect Thanksgiving holiday travel later in the week. (AP Photo/The News Tribune, Janet Jensen) (AP)
--

A vicious storm struck the Pacific Northwest and other western states at the start of the holiday travel season, dumping heavy snow on roads, knocking out power to tens of thousands of people and causing a cargo plane to overshoot its runway in Seattle.

At least three deaths have been blamed on the storm, including a man struck and killed outside his car Monday night on snowy Interstate 5 in Tacoma. Washington State Patrol Trooper Brandy Kessler said it wasn't clear whether the man was chaining up his car or pushing it when he was hit.

Blowing snow, slick roads and temperatures in the mid-20s turned the Monday evening commute in the Puget Sound region into an hours-long crawl -- for those who made it home. Some commuters gave up after being stuck for five hours or more and returned to their offices or just left their cars at the side of the road.

Snow and blizzard warnings across Washington and Idaho's Panhandle were ending Tuesday morning, but frigid air will drop Tuesday night to the single digits in Western Washington and as much as 15 degrees below zero in Eastern Washington, the National Weather Service said.

Seattle was among the warmest spots in the state Tuesday morning at 22 degrees, while Spokane was in the single digits and some spots in northcentral Washington remained below zero.

Seattle's morning rush hour wasn't, with few cars on the icy roads and motorists keeping it slow. Most schools in the state were closed or delayed and the University of Washington closed all three of its campuses. Snowplows and deicing trucks were at work across the state.

Elsewhere in the West, the weather service issued a blizzard warning for Utah amid forecasts of strong winds, heavy snow and possible whiteout conditions Tuesday night. Searchers will brave an icy blast of winter when they resume the search of a rugged canyon near Moab for a man believed to have shot a Utah park ranger last week.

Temperatures dipped to freezing in the Portland, Ore., area on Monday as homeless people lined up at emergency warming shelters.

Portland got a dusting of snow Monday evening but the outlook for Tuesday was just chilly -- with a forecast high of 30 degrees, National Weather Service meteorologist Russ Willis said.

Forecasters predict up to 14 inches of snow in northcentral Idaho as a powerful storm closed schools and shut down sections of highways. The Idaho State Police says all roads in Bingham County in eastern Idaho are closed and the agency is urging motorists across the state to stay off roads slick with ice and snow.

A record 2.5 inches of snow fell at Sea-Tac Airport on Monday, the Weather Service said. The old record for the date was 1.5 inches set in 1977.

"It's nothing we can't handle," he said. "We've been through this before."

Transportation Department sanding trucks were blocked overnight in many parts of the Seattle area by cars that were abandoned or wrecked. Drivers and bus riders were urged to stay home Tuesday until conditions improve, and 14 bus routes were canceled due to icy roads and abandoned cars.

Winds gusting to 65 mph made matters worst by cutting off power Monday for tens of thousands of utility customers in Western Washington. Puget Sound Energy said most of its 90,000 outages were in Kitsap County. That number was down to 64,000 by 6 a.m. Tuesday, but spokeswoman Gretchen Aliabadi couldn't say when everyone would have their power turned back on.

Two people were killed Monday when the car they were in slid on a snowy road at Cowiche near Yakima and collided with another car, the State Patrol said. In Tacoma, a Pierce County Transit bus slid down a steep hill and overturned with about 20 people were aboard on Monday. Twelve were taken to hospitals, but no serious injuries were reported.

Temperatures should start to moderate Wednesday and there's a chance of rain on Thanksgiving Day in Western Washington, although it could start as snow. Eastern Washington temperatures are forecast to remain well below freezing into the weekend, forecasters said.