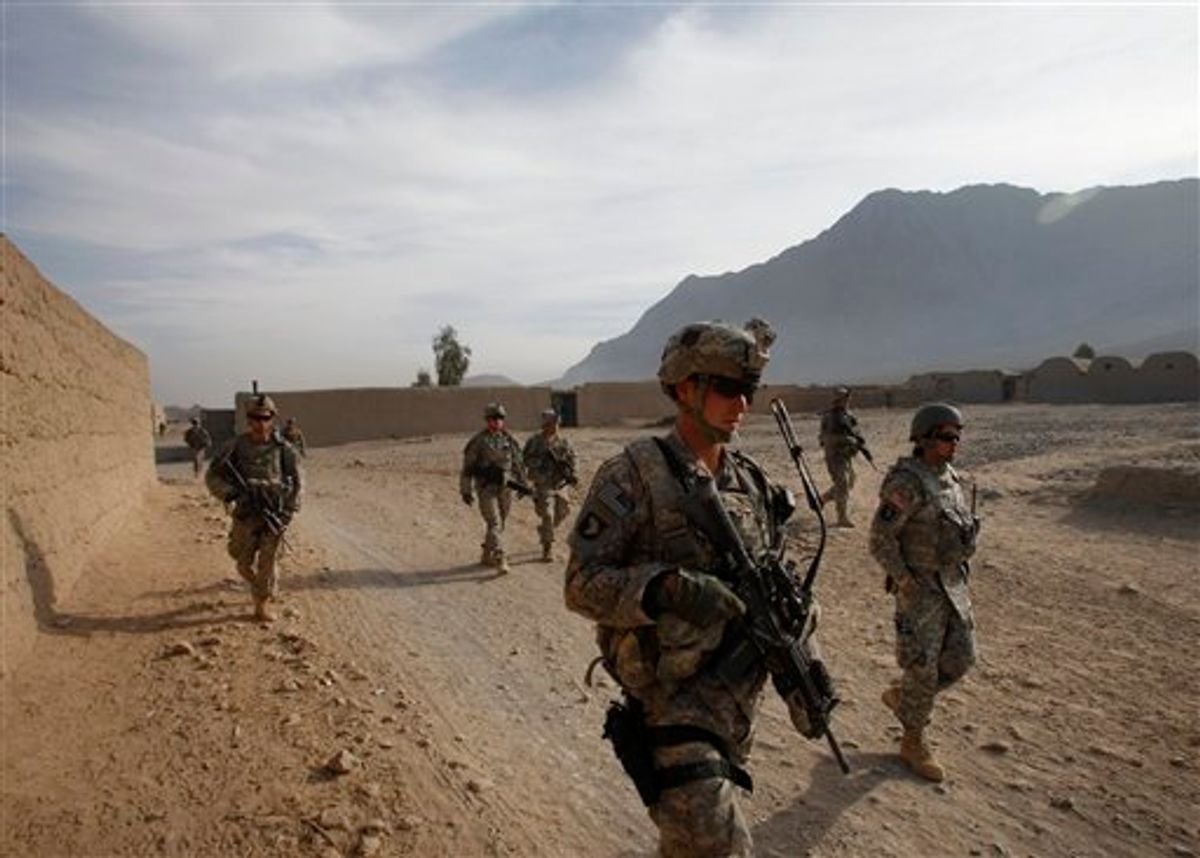 Now that the war in Afghanistan is set to continue through 2014 and probably beyond -- even with half of Americans opposing the war -- the Obama administration is at pains to convince the public and the press that things are getting better.

That's a tough task these days, with a new Pentagon report to Congress saying that violence in Afghanistan is at an all-time high. Over the summer, the number of U.S. soldiers killed in 2010 surpassed the number killed in all of 2009. And then there's the embarrassing news that the Taliban leader engaged in much-hyped peace talks with the U.S. was in fact an impostor.

Despite all that, some administration and military officials are arguing that there are signs of hope in Afghanistan. And a pattern has emerged in these assurances: More often than not, the officials passing them on to the press insist on anonymity.

The latest example is a briefing by a "senior defense official" that is described today by the New York Times, the Los Angeles Times, and the AP. That unnamed official insisted that, despite the grim Pentagon report to Congress, "much has already changed since the report's Sept. 30 end date," according to the AP's account. And the New York Times adds that the anonymous official lashed out at doubters as "irresponsible."

Now, there are legitimate uses for anonymity in journalism. But it's hard to see how granting an administration official anonymity to advance an entirely self-serving argument -- thus removing the risk that the official can be challenged on what he or she said in the present or later on -- serves any defensible purpose.

It should also give readers pause when Obama administration officials are not willing to attach their names to assertions that the situation in Afghanistan is looking up. Wouldn't that be the kind of good news -- if one is actually confident in it -- that an official would want to be associated with?

The stories with the "senior defense official" today are hardly the first examples of anonymous officials passing on the good news about the war. Here's a non-comprehensive look at the practice over just the last couple of  months. The bolded sections highlight the assertions from the anonymous sources, which are typically not challenged in the stories.

A senior defense official who briefed reporters about the report at the Pentagon on Tuesday sought to put a positive interpretation on the expansion of the Taliban into other areas of Afghanistan like the north and west.

The official said he could not be identified under Pentagon ground rules, but neither he nor other Pentagon officials provided an explanation for those rules.

The anonymous official acknowledged that there were many skeptics questioning the ability of the United States to make progress in Afghanistan after nearly a decade of war.

But he said this was the first time the United States had committed so much in military strength and civilian effort to the country, and therefore the doubters were being ''irresponsible'' in not looking at the bigger picture.

A senior Pentagon official who briefed reporters Tuesday on the report focused on the positive, saying that "we've seen a lot of encouraging signs over the last six or seven weeks" in the period not covered by the report. But he added that "in no way is anybody guaranteeing success."

He and other officials spoke on the condition they not be identified because they were not authorized to speak publicly.

The officials, who spoke on the condition of anonymity because they were not authorized to discuss specific tactics, said the combination of the raids, the airstrikes and the use of explosives on the ground have been instrumental in improving security in areas around Kandahar, a Taliban stronghold that has been the focus of coalition operations this fall.

"We've taken the gloves off, and it has had huge impact," one of the senior officials said. ...

"The tanks bring awe, shock and firepower," the officer said. "It's pretty significant."

In the past three months, US Special Operations troops have killed or captured 368 insurgent leaders. On each mission, Afghan commandos accompany US troops and Afghan officers work with the Special Operations command at Bagram Airfield to choose targets, military officials said.

"We understand President Karzai's concerns, but we would not be as far along as we are pressuring the network had it not been for these very precision operations we do at night,'' the NATO military official said.

While the official said the Afghan government's efforts to talk with insurgents has not progressed yet beyond "talks with talks," the fact those are progressing at all is an indication to the United States that the Taliban "may" be under pressure, the official said. The review will try to consider where that pressure is being exerted by the NATO forces and how it can be sustained and increased.

"What's happening in Nawa is what we said would happen: We're transitioning in two years," said a senior U.S. military officer, who spoke on the condition of anonymity because he was not authorized to discuss the matter. "Doing overwatch of the Afghan forces doesn't mean it's not a transition."

The military officials said that a final decision on how many troops will remain in the area after next summer will not be made until spring and that it could involve a far greater drawdown than the Marines are forecasting.

But I just spoke with a senior defense official who said, you know, this peace council in what he confirmed is high-level talks with some high-level Taliban leaders, he said there is inherent value in having the talks and but doesn't think that the U.S. military campaign is far enough along to yield any sort of substantial results right now. He told me, we don't think that the Taliban is losing to the degree that they'd come to terms in large numbers. So, without question they're hurting. And he said, we have it on good information that they are feeling the pressure. He says, just not enough.

Despite discouraging news from Afghanistan and growing doubts in Congress and among the American public, the Obama administration has concluded that its war strategy is sound and that a December review, once seen as a pivotal moment, is unlikely to yield any major changes. ...

"The fundamentals are in the place where they should be," a senior administration official said.