Chris Christie and the best worst decision ever

He astonished policy experts with his decision to kill a massive infrastructure program. And now he's a TV star! 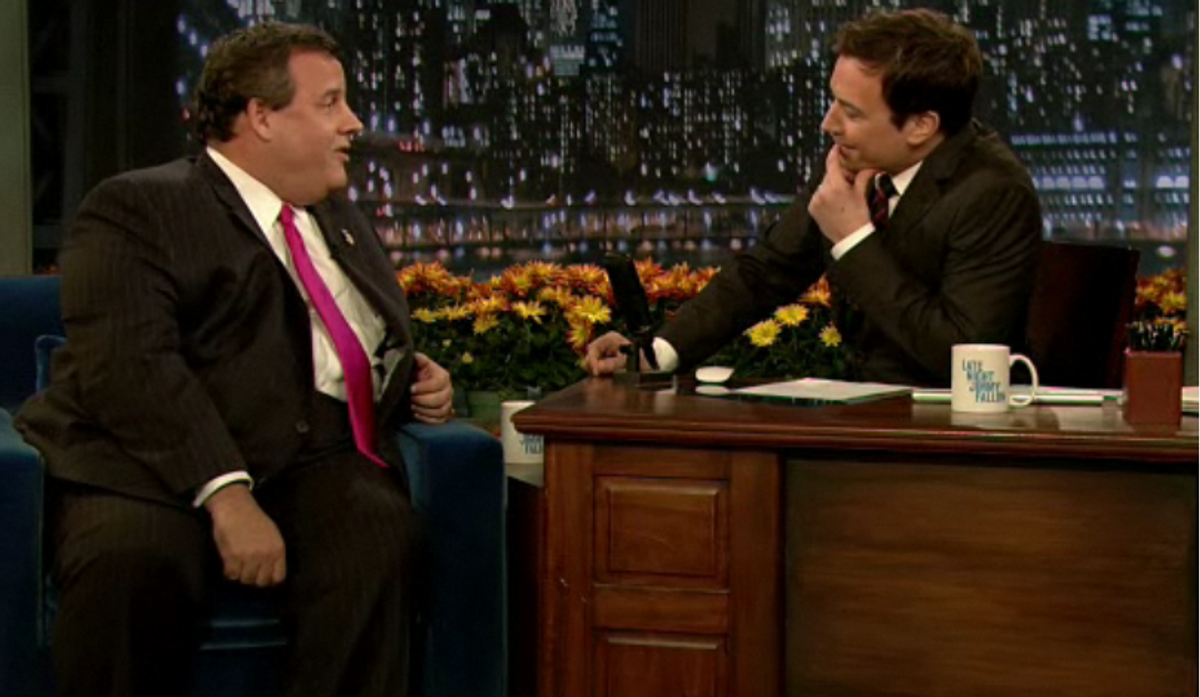 When Chris Christie single-handedly pulled the plug last month on one of the nation’s largest infrastructure projects, a new rail tunnel under the Hudson River, Paul Krugman branded it "arguably the worst policy decision ever made by a government of New Jersey."

Krugman may have had a point, but to date the decision has been a political gold mine for the Garden State's first-year governor. Not only has it enhanced his status as a budding national Republican rock star, it’s also won unexpectedly wide support from New Jersey’s Democratic-friendly electorate. And on Tuesday night, it earned Christie five minutes of priceless publicity on national television.

The occasion was a guest appearance -- following Jessica Simpson -- on Jimmy Fallon’s late-night NBC talk show. Christie was invited after he used his official Twitter account to respond to Fallon’s on-air crack last month that without the new tunnel, New Yorkers would be forced to get to New Jersey the way they always do: "By accident." Christie tweeted out an offer to give Fallon a tour of the state and took a playful swipe at his Bruce Springsteen imitation at this year’s Emmy awards. Shortly thereafter, the governor was booked for the show. (In this sense, you might say Christie was borrowing from the playbook of Cory Booker, the media-attentive Newark mayor who used fake outrage and YouTube to land a guest spot on "The Tonight Show" last fall.)

When Fallon introduced him on Tuesday night (well, it was actually early Wednesday morning in the Eastern and Central time zones), it quickly became apparent why Christie had tried so hard to nab an invite.

Fallon began by explaining the circumstances that had led to the governor’s appearance and repeated his original crack about New Yorkers accidentally ending up across the Hudson. Christie pretended to stare him down angrily.

"You think it’s funny, Jimmy? You know what we do to people like that in Jersey?"

Over the next few minutes, Fallon asked Christie about the derivation of his name, told him that "it’s cool" that he’s connected on Twitter and Facebook, and asked him if he’d be interested in running for president or vice-president. Christie replied with some humorous anecdotes and his stock denials of interest in 2012. "Why would I want a less powerful job than I have right now?" he asked. Fallon did elicit an interested reaction from Christie on the subject of Sarah Palin, suggesting that the two of them team up for ’12.

"Do you think Sarah Palin can do it?" Fallon asked.

What was most striking, though, was how the tunnel issue was handled. Granted, a late-night comedy show is not a forum for deep policy debate. But to hear Fallon address the topic, the casual viewer would never have known that Christie’s decision to cancel the project was controversial and that policy experts remain aghast over what they see as a flagrant act of gubernatorial irresponsibility. "You didn’t like this tunnel thing there because it was too expensive?" Fallon inquired.

"It was too expensive and New Jersey was going to pay for 70 percent of the cost of the thing," Christie said. (Under the original terms of the project, New Jersey, the Port Authority of New York and New Jersey, and the federal government would have all put up roughly equal money, with New Jersey footing the bill for any overruns.)

"When you’re talking billions, Jimmy, it’s a lot ... and there’s nothing New Jersey hates more than getting screwed by New York," the governor added, to applause from the studio audience.

Shortly thereafter, Fallon told his guest that "you’re really popular and everyone loves you," thanked him for coming, and segued into a brief pre-scripted bit featuring Christie. Ninety seconds later the segment was over.

For Christie, a genuinely charismatic public performer, the show was an ideal forum to showcase his personality, humor and, yes, warmth. He’s far more instantly likable than most politicians, especially in a setting like this. Sure, Fallon’s show doesn’t have a huge audience, but if Christie does decide to run for president in 2012 -- and I wouldn’t rule out that possibility, no matter what he says now -- it’s not hard to envision him climbing to the top tier one television appearance at a time, sort of like Mike Huckabee in 2008. His message is deeply satisfying to the Republican Party’s base while his personality attracts -- or doesn’t instantly repel -- many less ideological voters.

Worst policy decision ever? Try telling that to Chris Christie right about now.