Take that, Bristol! Jennifer Grey wins "Dancing With the Stars"

Palin finally loosens up, but it's not enough to best the talent of the injury-prone "Dirty Dancing" star 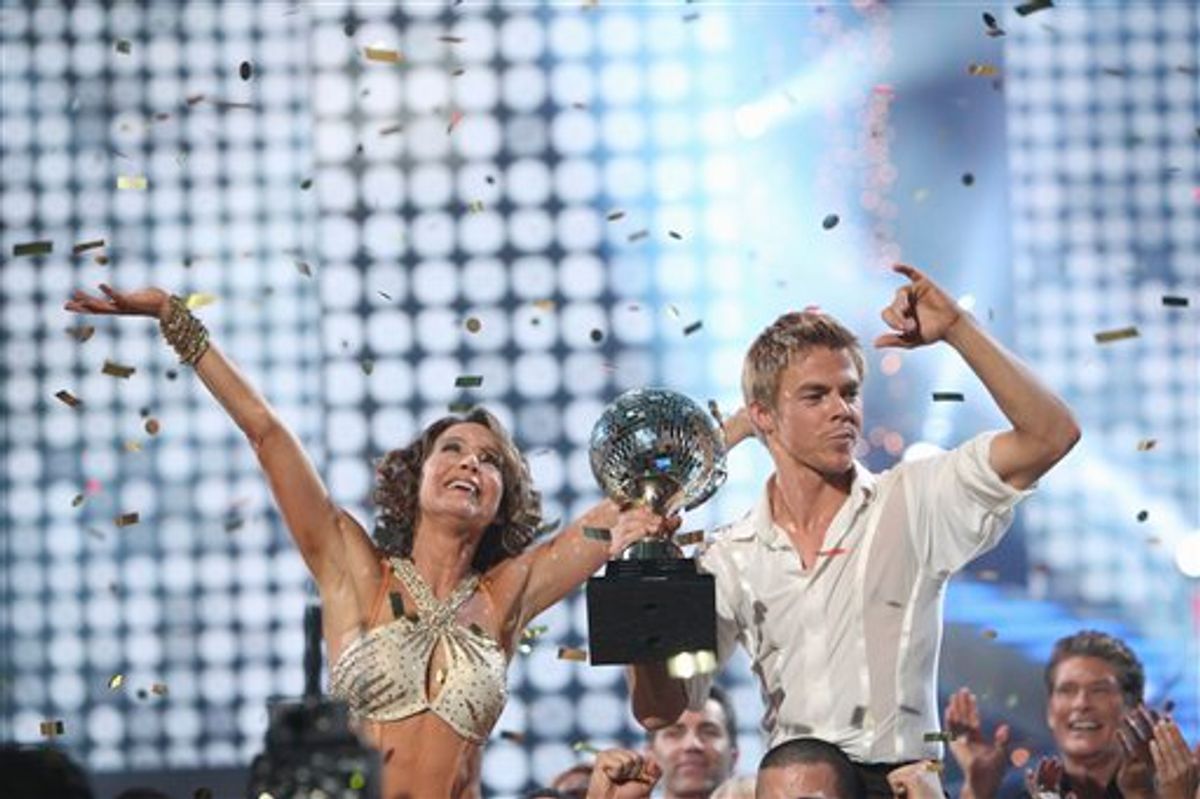 In a photo provided by ABC, Jennifer Grey, left, and Derek Hough celebrate on stage with the mirror ball trophy after winning the Dancing with the stars competition Tuesday Nov. 23, 2010 in Los Angeles. (AP PHOTO/ABC/ADAM LARKEY) (AP)
--

Before we talk about the finale, I want to remind everyone what a strange journey we've endured so far.

Do you remember that David Hasselhoff was a contestant this season? And that we all thought he might actually win the whole thing because he was the biggest train wreck of the bunch, and therefore the most fun to watch? God, I've missed him.

We should have known that David's demise right out of the gate signaled unusual things to come -- but the next set of dismissals seemed to proceed as predicted. Who can forget Michael Bolton's junkyard dog routine? Or Margaret Cho's exuberant yet fatally flawed psychedelic gay bird number? You could argue that The Situation should have fallen before Margaret (considering he had trouble walking gracefully, let alone doing anything that could seriously be characterized as "dancing") but there was no outrage with that decision. After The Situation floundered, Florence Henderson was the next logical one to go, having used every "naughty granny meets Doris Day" strategy in her diabolical arsenal to keep us from noticing that her partner Corky was basically carrying her around like a Muppet had been sewn onto his front.

It was when Audrina Patridge, top of the leader board, was ousted that we wondered if something might be amiss. But even then it was somewhat believable. Audrina demonstrated as little internal passion or personality as Bristol Palin, but there was something off-putting about her coldness that made it hard to root for her. And, even though it's not a very nice thing to say, the girl was stupid. I've never heard as many ridiculous things come out of one person's mouth since watching that YouTube compilation of Bill O'Reilly clips.

Rick Fox's elimination was the first true shock. He had just come off his best week; he was physically stunning to look at and demonstrated an ease and likability unmatched by any of the other contestants. Kurt Warner's dismissal the following week was no great surprise, but it still seemed odd that he was gone and Bristol remained. In the scheme of things he had out-performed her over the weeks and, even though I gave him a hard time for his simplistic "Bible as the word of God" views on the world, he surprised me with a genuineness that was hard to dislike.

It was Brandy's elimination that confirmed our worst fears -- ones that have been well documented already and don't need to be rehashed. But suffice to say Tuesday night's finale would have been far more exciting if Brandy was taking on Jennifer Grey and Kyle Massey for the crown. Alas, Bristol had come to represent much more than dancing -- and whether you're of the "she's here because of her mother" or "she's here because she reminds me of myself, or my kid, or the sad babysitter" camp, we could all probably agree that she didn't make the finals for being one of the best, or even most improved, dancers. Every one of the vanquished competitors improved as much or more than Bristol did week after week, no matter what the judges and remaining contestants are obligated to tell us.

The contestants performed two dances tonight -- the first was "couple's choice," which was a re-do of their favorite (and I assume, best) dance of the season; the second was an "instant cha cha cha," where the song that they all danced to ("Raise Your Glass" by Pink) was revealed after the first dance had been performed and scored.

The first dance was scored differently for this finale, with judges individually determining who is best, second best and worst by assigning 10s, 9s and 8s accordingly (no ties or substitutions.) The second dance was scored normally.

From the moment Kyle hit the dance floor at the beginning of the season, he grabbed our hearts and stole the show with his uninhibited enthusiasm and boyish charm -- which continued most weeks even when the "boyish" part became a little hard to stomach at times. But while people went on and on about Bristol's composure under pressure at the delicate age of 20, it was easy to forget that Kyle was only 19 and living under that same pressure. Over the weeks, he had more ups and downs than anyone on the show, seesawing back and forth between the bottom and top of the leader board. Through it all he steadfastly improved his footwork, never complained or stormed out of rehearsals, never broke down in tears of frustration or anger and slowly built up our respect.

Going into tonight's finale he was not the most talented or the most popular of the remaining contestants, but he may have been the most deserving of the crown.

For their first dance, Kyle and Lacey chose the tango from week six that catapulted them from sporadic competitors to bona fide contenders. They came out swinging with the kind of energy that only the combination of Kyle and the finals could produce. As has been his most successful strategy to date, Kyle didn't hold anything back, which created a frenetic excitement that Jennifer has never matched, and Bristol can't begin to touch, but may also have contributed to a somewhat frazzled performance. It didn't matter, though. Judges finally appreciated Kyle for who he is and gave him props for staying true to his strengths.

True to form, Kyle and Lacey danced a spirited cha cha cha that was long on charisma and still a little loose with technique. No new surprises here.

So much has been written about Bristol -- from the moment that she joined this competition to the last few weeks when controversy has consumed her -- that it has become impossible to view anything she does on the dance floor as relevant to her success or failure. She started the competition with no dance or performance experience (although she wasn't as unexposed to the limelight as people made her out to be, having survived a media storm from her high-profile pregnancy during her mother's Vice Presidential campaign) and with one goal in mind -- not to be the first to leave. She entered the final night of competition as possibly the most polarizing figure in the history of the franchise -- as either the populist, resilient heroine of the "every man" or an undeserving hack who is placing a nail in the coffin of the show's credibility. She has been on the bottom of the leader board at least half the time, but has somehow managed to pull in enough viewer votes to stay. Love her or hate her, she has emerged as an unpredictable spoiler on a show that has never seen anything comparable in its 11 seasons.

Bristol and Mark chose their breakout tango. Bristol looked more relaxed during this dance than we've ever seen her before, almost as if the end of the journey has finally released her from the tension she's been holding in for all of these weeks. Her face was more open, her smile more genuine and her moves more fluid. And yet the extra spring in the step is still missing -- so, even though she did all of the "right" moves, it did not elevate her performance to the point that she could be considered a serious contender. Win or lose, this has been a transformative experience for her, and I think she's finally allowing herself to feel the power of that.

Bristol entered the dance floor in her own version of Muppet chic, once again looking as relaxed as we've ever seen her. She has no intention of winning this competition and has finally decided to let loose and have fun. Had she only shown this level of playfulness earlier, she might have made a case that she deserved to be in the finals. As it is, she's making the most of it. Regardless of the outcome, Bristol will leave a new woman, taking with her a newfound confidence that will hopefully allow her to shed the melancholy that she's been carrying around with her all season.

Jennifer came into this competition as the heavy favorite, not only because she had previous dance experience (although to be fair, that experience was playing a character with no dance experience), but also because she was iconically beloved by millions before she even hit the dance floor. And at first she didn't disappoint, leaving the rest of the pack in the dust with her precise moves and charming us with her infectious laugh -- until her body started to break down -- and the whining began. Suddenly, her success was no longer a foregone conclusion as Brandy rose from the middle of the pack to take the lead. Just when it seemed like she might pack it all in, a visit from father Joel turned things around, and she was back in business. The smile came back and the string of perfect scores soon followed.

Jennifer and Derek chose the Viennese Waltz, their first dance of the season and the one that connected her emotionally to her "Dirty Dancing" days with Patrick Swayze. This time she wanted to perform it with Derek in mind, in honor of their three-month journey together. Unlike the first performance when sentimentality trumped technique and poise, Jennifer returned to the piece with a new wisdom, sharper moves and a sophistication that wowed the judges and secured her spot at the top of the heap.

The fancy tasseled gold shaky pants were back for the final dance, which appears like it might be her last dance for a long while. Her body looks on the verge of going into serious post-traumatic stress when this is all over, but she was able to hang on for one more night to see out her victorious season 11 run. Her lines were clean, her posture was upright and her moves crisp -- even though there was something about her carriage that made her seem more vulnerable than ever. Regardless, she once again out-classed the competition and took a solid lead going into the final results.

And all was right with the world …