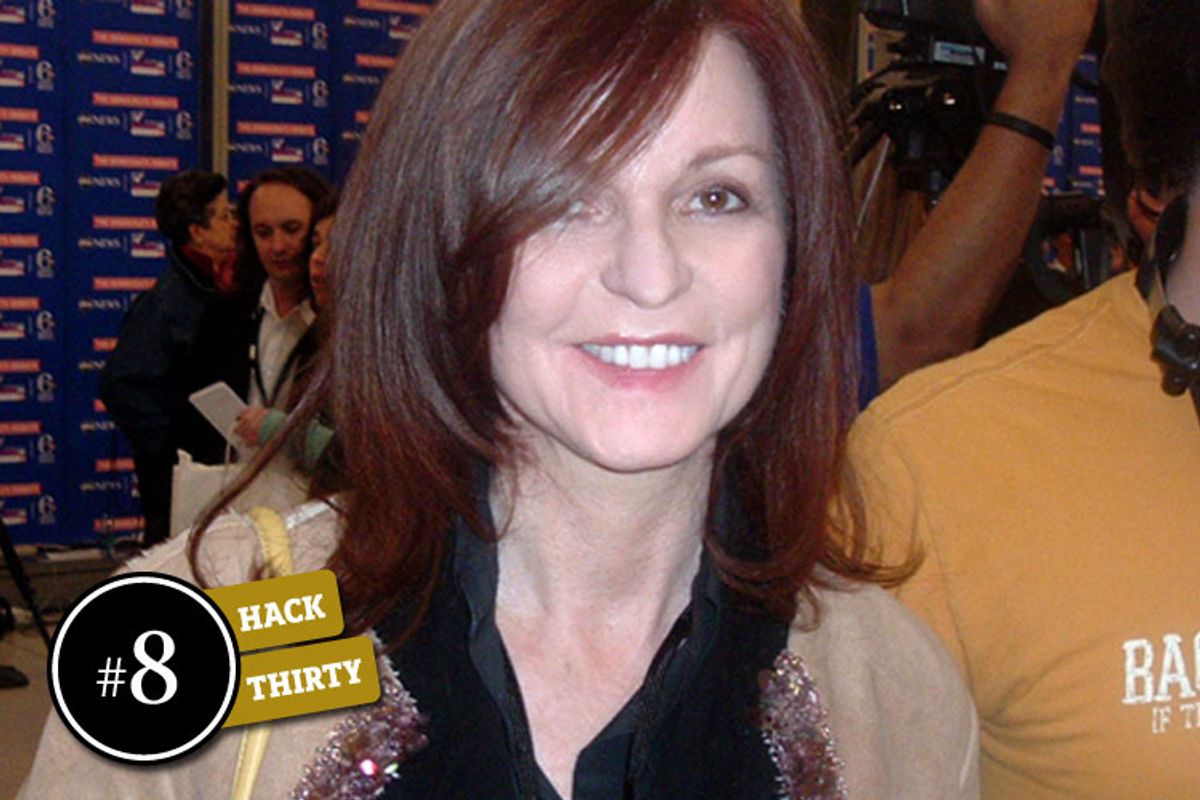 Oh, MoDo. Maybe there are still people who thrill to her dated pop culture references and tiresome "wicked" nicknames for politicians. Maybe somewhere there's a reader who still finds it illuminating to examine elections as battles between effeminate girly Democrats and straight-shooting Republican cavemen. Maybe someone's glad that the most prominent female political columnist in the nation tends to consider every powerful female politician a castrating bitch.

But I don't think even Maureen Dowd is still into Maureen Dowd anymore. Dumb insults mysteriously scrubbed from a column, the "plagiarism" scandal in which Dowd revealed that she "weaves" unedited e-mails from friends into her column, the equally stupid "dateline" incident in which she had an uncredited assistant do the reporting while she filed from Jerusalem, all of these point to a hack whose heart isn't even in it anymore. How best to respond to the news that Obambi won a Nobel Prize? Sigh, how about an imagined conversation between unconvincing versions of Clinton and Bush, in which they both occasionally stop sounding like cartoon hicks and begin speaking in the unmistakable vernacular of Maureen Dowd. (Sorkin, get me rewrite!)

Dowd played an important part in the character assassination of Al Gore, and she still has a hot key for the phrase "earth tones," for use whenever she needs to round out a column on the essential femininity of some Democratic pol. Well, any Democratic pol besides Hillary Clinton, who is constantly painted as an emasculating, ball-breaking, hysterical harpy who plays the victim card to get ahead. Called on her sexism by the Times public editor, Dowd said, "I have always played with gender stereotypes," by which she means that she has always strongly reinforced them.

She once told New York magazine that she thought of her columns as "political cartoons" -- and that's basically what they are. Bad political cartoons, in which all the heavy-handed symbols have little word-labels, so you know what they're supposed to represent.

Mistress Hillary started disciplining her fellow senator last winter, after he began exploring a presidential bid. When he winked at her, took her elbow and tried to say hello on the Senate floor, she did not melt, as many women do. She brushed him off ... She has continued to flick the whip in debates. She usually ignores Obama and John Edwards backstage, preferring to chat with the so-called second-tier candidates. And she often looks so unapproachable while they're setting up on stage that Obama seems hesitant to be the first to say hi.