One step ahead of the terrorists?

That's TSA's justification for its security measures. But evidence suggests they've been one step ahead of us 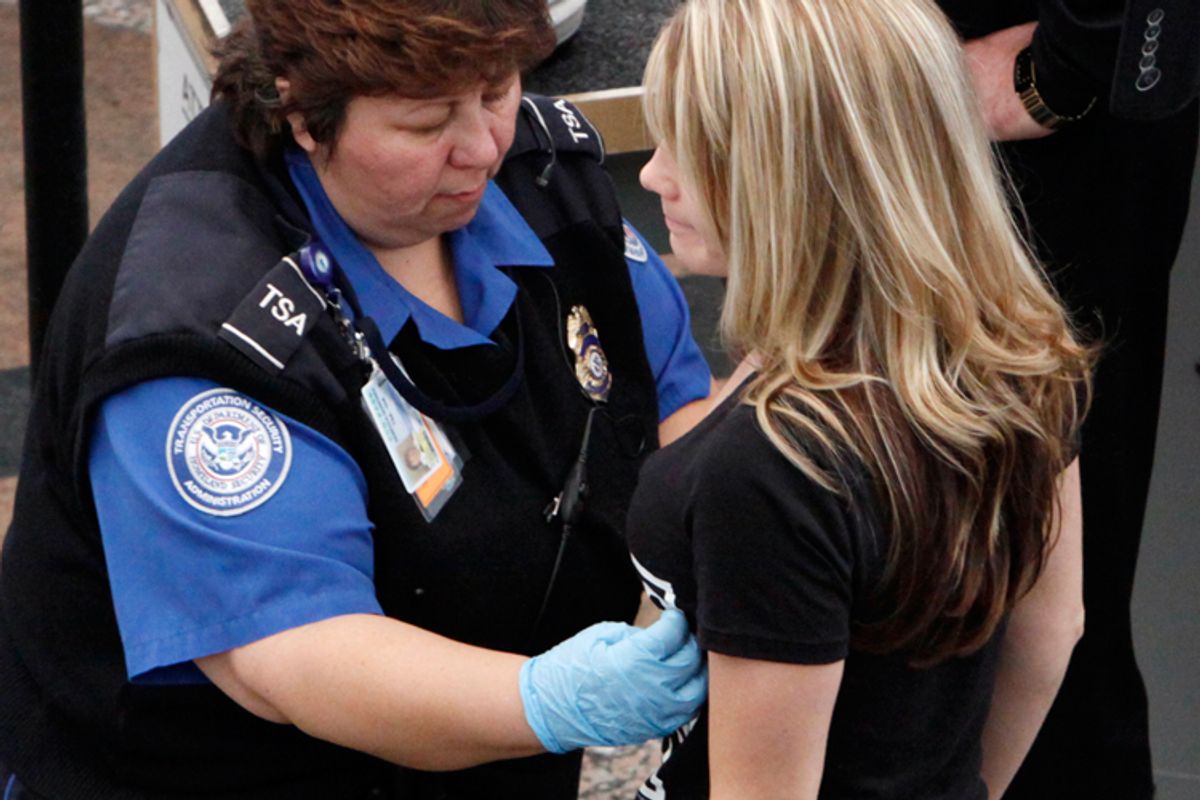 A TSA worker pats down a passenger at Denver International Airport on Tuesday.
--

I have mixed feelings about so-called opt-out day.

On the one hand, after nearly 10 years it is good to finally see a grass-roots resistance to the Transportation Security Administration. On the other hand, for those of you planning to participate, this will cause a lot more inconvenience for your fellow passengers, on the busiest travel day of the year, than it will for TSA. And then, presumably, it's back to normal on Thursday? Not much of a statement, really. If anything, the opting out campaign should begin next Monday, after the holiday rush, and last indefinitely.

Unfortunately, as I touched on in my column the other day, the conversation over the body scanners and pat-downs, important as it may be, has distracted us, and kept us from asking more important questions about TSA's approach to security overall.

Sure, the scanners raise privacy issues, and possibly health issues as well. But these machines are only a small part of what has become an unsustainable security strategy: that is, a strategy that insists on treating every passenger, whether an infant, an elderly woman in a wheelchair, or a uniformed crew member, as a potential terrorist; and insists on inspecting every body, and every piece of luggage, for every possible weapon. This is an unrealistic, unenforceable and ultimately self-defeating approach in a country where more than 2 million people fly every day.

The scanners are also the latest turn in what is an unwinnable arms race. First came Sept. 11 and suddenly pointy objects are contraband. Then came Richard Reid, the "shoe bomber," and TSA decreed that all passengers must remove their shoes. Next we had the London liquid bombers, and suddenly your shampoo and toothpaste are consigned to 3-ounce containers. Then came the Christmas Day underwear bomber, and as a result we're being body-scanned and groped.

Look at us. We are essentially strip-searching the entire flying public, from preschoolers to pilots. Ten years ago this would have been unfathomable, yet here we are. What possibly could be next?

TSA tells us we need to stay "one step ahead of the terrorists," but the evidence suggests the terrorists have been one step ahead of us. And that shouldn't be shocking. Plainly put, we need to own up to the fact that we cannot protect ourselves from every conceivable threat. Short of turning our airports into fortresses, there will always be a way for a clever, resourceful enough perpetrator to skirt whatever measures we put in place. That's not defeat, it's reality. As is the fact that the true nuts and bolts of thwarting a terror attack is not the job of a TSA concourse screener. It's the job of the FBI, CIA, Interpol, etc. It's the job of law enforcement and counterintelligence. Old-fashioned detective work is a lot more effective and useful than a TSA screener arguing with somebody over the size of a toothpaste tube.

That's not to say that airport screeners don't play an important role. But that role is only meaningful if executed properly. Concourse security needs to be rational, efficient and effective. Ideally we would see a leaner, scaled-down version of what exists today -- one that is focused less on looking for weapons than looking for people who might use weapons.

(And where are the airlines in all of this? They stand to lose as much as or more than any of us, and for a decade they've been silent. "When it begins to drive away customers," is the stock answer to the question of when carriers will protest more loudly. I would argue that TSA is already driving away their customers -- millions of them, if the e-mails I receive are any indication. And what of those it "merely" makes angry? It strikes me there is something wrong with a business model that accepts angry and harassed customers as an acceptable option to no customers at all.)

Meanwhile, as maybe you heard, several airports around the country are looking into the idea of kicking out TSA and putting airport security into the hands of private contractors. In other words, going back to the way things used to be.

Not everybody remembers that the TSA did not exist prior to the terror attacks of 2001, and that private companies took care of passenger screening on behalf of the airlines. After the attacks of Sept. 11, all of that changed. Airport security became federalized when President George W. Bush created the TSA. Not everybody was pleased at the time, and certainly not everybody is pleased today.

"With respect to airport security, I wrote on Nov. 10, "it is remarkable how we have come to place Sept. 11, 2001, as the fulcrum upon which we balance almost all of our decisions. As if deadly terrorism didn't exist prior to that day, when really we've been dealing with the same old threats for decades." Indeed, and one of the grand and seldom acknowledged ironies here is that the success of the Sept. 11 attacks had nothing to do with airport security in the first place.

Yes, you read that correctly. Think about it. What weapons the 19 hijackers had or didn't have was irrelevant. Had box cutters been banned, they would have relied on something else. Something as simple as pencils would likely have sufficed. It wasn't about hardware. It was about the element of surprise. The men were taking advantage not of a loophole in security, but a loophole in our mind-set.

Prior to 2001 our understanding of hijackings was very different. We'd been living through decades of "take me to Cuba," diversion to Beirut, etc. Crews were trained in something called "passive resistance." Loosely put, you let them hijack the plane, lest the perpetrators begin to shoot people or blow up the plane. The idea of using the airplane itself as a weapon was out there, but it was not, at the time, a widely acknowledged threat or a meaningful part of any security or crew training protocols.

Thus the genius of the 9/11 scheme was that, short of the hijackers' chickening out, it was all but guaranteed to succeed. Just the opposite is true today. Thanks to passenger awareness, armored cockpits, and several other reasons, any sort of copycat-style attack in the fashion of Sept. 11 is pretty much off the table; no terrorist group would be dumb enough to opt for a scheme with such a high likelihood of failure. Good luck to any evildoer stupid enough to put faith in the modus operandi, successful as it was in a fleeting moment of opportunity, of Mohammed Atta and his 18 helpers. He wouldn't make it two steps up the aisle.

So why are we still fussing over box cutters and scissors? Never mind the fact that a deadly blade can be hand-fashioned out of pretty much any device or material.

Michael Roberts, a pilot for ExpressJet (Continetal Express), became an instant celebrity when he refused a body scan and pat-down and was denied access to his plane. Within hours he was headline news, making the rounds of Fox, CNN, et al. Yet, months earlier, when I told the story of having a butter knife confiscated from my luggage, nobody in the media batted an eyelash. You can accuse me of jealousy, but I think I've got a point, no pun intended: Asking a pilot to endure a body scan or pat-down is wasteful and invasive enough, it's true. But taking a knife from a pilot is by orders of magnitude more stupid. Theoretically at least, Roberts could have been hiding explosives in his underwear. On the other hand, what nefarious use a pilot might have for a finger-size piece of airline-issue silverware is beyond any stretch of imagination.

Or a passenger for that matter. We are wasting immense amounts of time and manpower to prevent an attack that already happened and that, for all intents and purposes, can't happen again. All of this while freight from overseas goes uninspected for bombs and explosives.

And speaking of overseas. If we insist on relying on those backscatter body scanners, why are we deploying them domestically rather than at airports abroad? The next bomber is far more likely to come from the Middle East, Africa or somewhere else outside the country than from Des Moines or Pittsburgh.

In too many ways our security philosophy veers between arbitrary and incoherent. How, contrary to what our government insists, does this make us safer?