Is female-on-male violence on the rise?

"Teen Mom's" Amber Portwood has turned a spotlight on women who hit. We take a closer look at the supposed trend 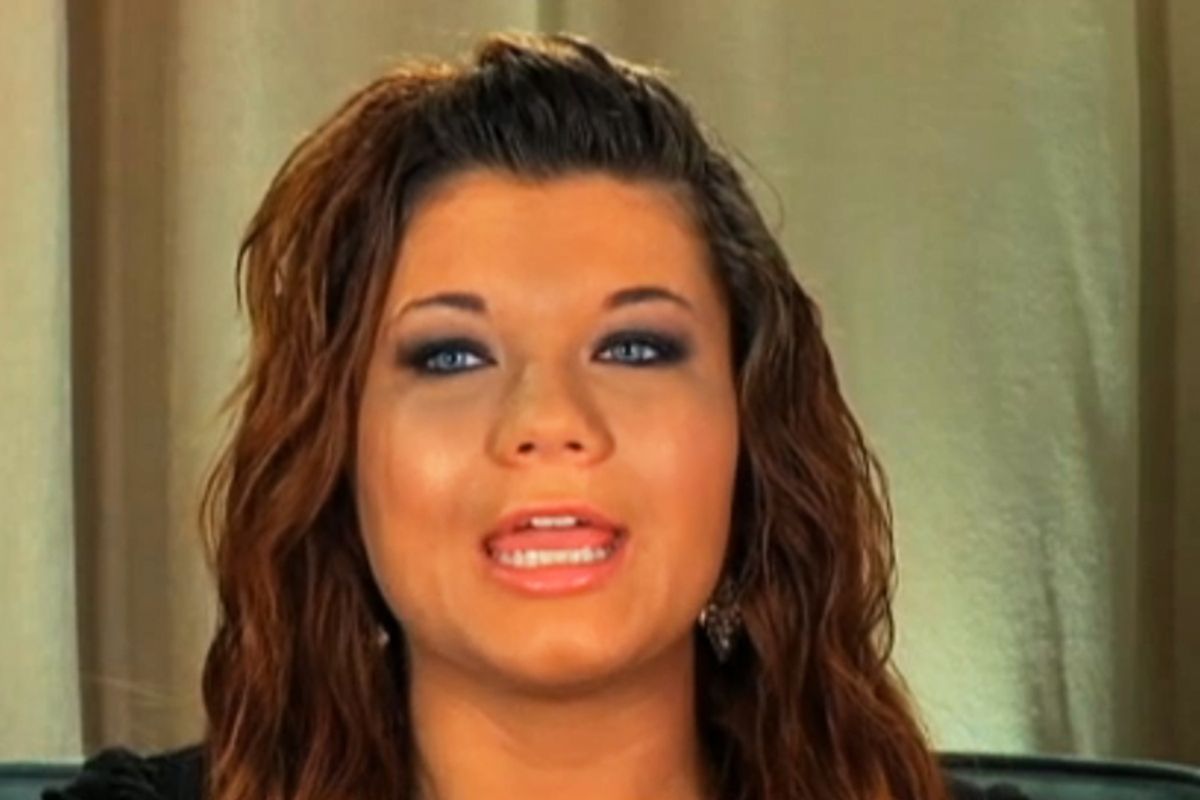 It's getting harder to argue that MTV's hit show "Teen Mom" makes young motherhood look "glamorous." Last week, Amber Portwood, arguably the most troubled of the four teenagers on "Teen Mom" -- and online, the most ruthlessly trashed -- was charged with three counts of domestic violence for several physical attacks on her oafish on-again-off-again fiancé and daughter's father, Gary Shirley. Local authorities had launched an investigation approximately two months ago, CNN reports, after Portwood was seen slapping, hitting, punching and kicking Gary while cameras rolled. Two of the three counts are felonies because Portwood's toddler daughter, Leah, was in the room when the incidents took place.

The Portwood saga caps an intense season on "Teen Mom," and an intense two years for examining the nuances of domestic violence through the lens of pop culture. Of course, there's never been any shortage of male-on-female abuse on TV, especially with ever-scummier reality shows in the mix. But lately what we're seeing, perhaps more than ever, is female-on-male violence. Before Amber vs. Gary, we also -- obviously -- had Chris vs. Rihanna, along with the common and supposedly exculpatory allegation that she hit him first. We had slapsticky reports that Elin Nordegren started the whole thing by clocking Tiger Woods with a nine-iron. There was Eminem's smash "I Love the Way You Lie" featuring, of all people, Rihanna on vocals, which whipped up debate about whether the song offered a groundbreakingly complex tale of relationship hell (with which Eminem is also familiar) or reinforced that old idea that, hey, maybe Rihanna did like the way it hurt. But one thing largely unremarked upon throughout the whole "LTWYL" micro-saga is that the violence is presented as, essentially, equal. In the song's follow-up, "I Love the Way You Lie (Pt. II)," the woman (Rihanna singing lead this time) is not just complicit in the abuse; she is also -- almost blow by blow -- as violent as the man. (Eminem: "Tell me I'll be sorry that you pushed me into the coffee table last night so I can push you off me ... You hit me twice, yeah, but who's countin' / I may have hit you three times.")

Inherent in the above is some suggestion of perverse 21st century gender parity: Both partners are equally to blame, both partners are equally abusive; women are strong enough to punch, women are not -- or no longer -- the only victims. When we hear of a woman who hits, we hear rumblings that women are "becoming more violent," that this is the dark price we pay for female empowerment. As in, hey, feminism, thanks a lot. But are women really becoming "as violent as men"? And is that even the question we should be asking in the first place?

People who support women's rights, and who have worked for decades to get male-on-female domestic violence taken seriously, may find this conversation not just eye-rolling, but deeply troubling. As expert Jill Murray, author, most recently, of "But He Never Hit Me," puts it: Equating the scope, incidence and danger of male vs. female domestic violence "stands to negate everything we've been trying to fight for, all the work we've done."

"We can't ignore or deny that women can be violent to their partners, whether their partners are men or women," says Jennifer L. Pozner, author of "Reality Bites Back: The Troubling Truth About Guilty Pleasure TV" and founder of Women in Media & News. "But by hyping inaccurate studies in news reports and creating salacious narratives on crime dramas, media have for decades tried to create a false equivalence, discussing the few women who have been violent and using those women's stories as proof that A) there's 'just as much' female-to-male domestic violence as male-to-female, and B) domestic violence isn't a problem that women have to deal with as victims anymore." (Men's rights activists go even further, claiming that men are [as reporter Kathryn Joyce put it] "victims of an unrecognized epidemic of violence at the hands of abusive wives.")

Let's see what the stats really say, and what they mean in context. The DOJ's numbers do contain this one perhaps surprising stat among many, many others: Males and females in violent relationships are "hit, slapped, or knocked down" by partners at almost exactly the same rate. Other research accumulating since at least 2000 suggests that, in fact, females are at least as likely as males to perpetrate intimate partner violence and that abusive relationships often involve mutual violence. So if you were cherry-picking, or very-broad-stroking, you could sort of call it even.

Except it's not. Not at all. Experts say the raw, in-a-vacuum numbers don't even start to tell the whole story of a given relationship, or of the complex dynamics of domestic violence. Other DOJ data shows men are more likely to be attacked with a knife or hit with a thrown object; women are more likely to be grabbed, held or tripped, raped, or sexually assaulted. Perhaps more to the point, females are more likely than males to sustain severe or injurious violence and to require medical treatment. "When you take the data out of context, in some cases, women come up as violent as men," says Meda Chesney-Lind, Ph.D., a criminologist, professor of women's studies at the University of Hawaii, and author, most recently, of "Fighting for Girls: New Perspectives on Gender and Violence." "But men will often use the excuse 'she hit me first' to justify decking her or throwing her against a wall. She slaps him, and that's used as a pretext to beat the crap out of her. She's the one who winds up in the hospital."

Research also shows that male victims do not take violence by their partners as seriously as females do and, conversely, that women are more likely to be frightened by future violence. Men, perhaps most significantly, are much more likely to commit the extended, continuing violence known as "battery."

In other words, even where select data points appear to be equal, "shared rates are not shared problems," says Jeff R. Temple, Ph.D., an assistant professor of obstetrics and gynecology at the University of Texas Medical Branch who specializes in intimate partner violence.

Temple also notes that -- likely related to changing mandatory- and dual-arrest laws in cases of domestic violence -- reporting of female domestic abuse has increased; that skews the numbers as well.

Another fallacy, says Chesney-Lind: the presumption that violent women are a new post-feminist breed, hitting because being "empowered" makes them more like men. In reality, male and female domestic violence tend to emerge from different places, and with different intentions. In the context of heterosexual domestic abuse, she says, "male violence is an expression of power and control over women; men are hitting to control and get things. Women's violence is an expression of frustration and rage and exasperation."

And that's where we get to the bigger picture. Bottom line, says Chesney-Lind, "we are fascinated by girls' and women's violence." For those who like to see women -- Angelina Jolie, even Helen Mirren -- wielding serious, even heretofore forbidden, power, it's hot. For those who fear women in that role, it's ... not. "For all the increased tolerance, even celebration, of aggressive women in pop culture, in daily life there's still a lot of disapproval of women even speaking up at meetings or asking for a raise, let alone committing a physically aggressive act," says Maud Lavin, author of "Push Comes to Shove: New Images of Aggressive Women."

Adds Chesney-Lind: "To take the longest possible view, one of the things you do when you want to discourage women from seeking social justice for their gender is show that there are terrible downsides to 'mimicking maleness.' That has been a motif since the first wave of feminism. If you demand to go into the public sphere you're going to be corrupted, just like men -- and the most recent version of that is that you're going to get 'out of control,' even hyper violent."

None of this is to say that domestic violence by women should be accepted, excused or cheered. But when it comes to pop culture and public discourse, it needs to be discussed on its own face and in its own context, with its own set of causes and implications, not as a game of one-upmanship -- and certainly not as a consequence of liberation. "Once we became concerned about them, it was very easy to find violent girls, because they'd always been there," says Chesney-Lind. That more enlightened, accurate conversation might be -- among other things -- one step toward "I Love the Way You Lie (Pt. III), in which both singers say, "... and that's why I got out."