Is "Burlesque" the new "Showgirls"? 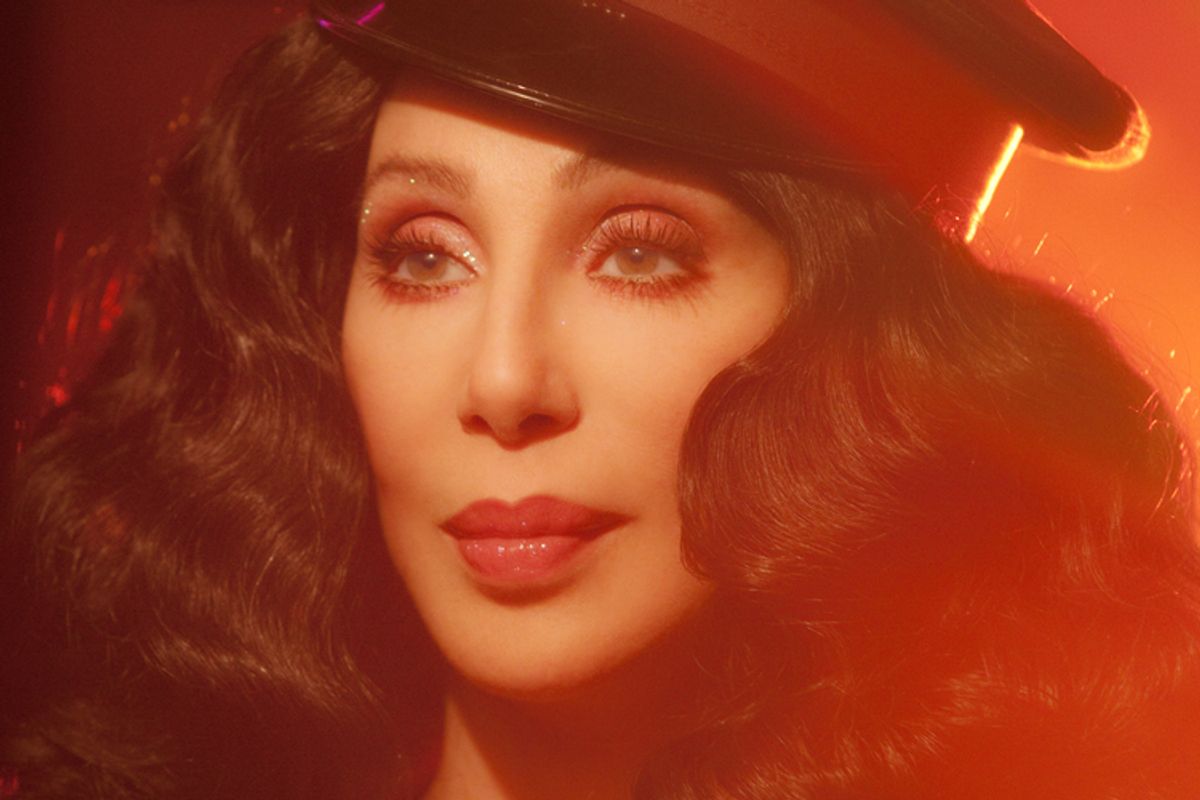 As the adage goes, no one sets out to make a bad movie. Certainly, no one sets out to make a campy one, since part of Susan Sontag's rules for camp is that by its very nature it must be unintentional. (People using "campy" when they mean "outrageous" is as irritating as when they say "surreal" when they just mean "weird.") Fans of camp have certainly been eagerly waiting to sink their teeth into "Burlesque," the new film starring Cher and Christina Aguilera as Los Angeles cabaret performers, with the hopes that this new musical would provide the same flash-and-trash thrills of "Showgirls." Paul Verhoeven's Vegas lollapalooza has become, over the last 15 years, the touchstone of wonderful awfulness, and fans of the cult classic have patiently been awaiting a new movie that could fill its sequined pumps.

"Showgirls" is one of those great bad movies that you enjoy watching -- albeit not for the same reasons that the filmmaker intended -- and can't wait to watch again, preferably with an unsuspecting friend. It's one of those movies that you can love -- and quite a few people do, including French New Wave master Jacques Rivette -- or hate. It's also excessive and crass and generally overdone, but it ain't boring. "Showgirls" is a film whose idea of a hot sex scene is Elizabeth Berkley grinding atop Kyle MacLachlan in a swimming pool like a crazed dolphin. It's a film where two female characters bond over their shared love of dog food. It's a film where a woman who has risen up from strip clubs to a snazzy topless show on the Vegas strip can be told, with a straight face, "It must be weird, not having anybody cum on you."

Since about five minutes after cameras started rolling on "Burlesque," people have been wondering whether it would be the worthy successor. The gay gossip mill immediately started going full force: "Cher gave attitude at the table reading!" "Christina's unprofessional!" "The director and his studio-head boyfriend had loud domestic squabbles in front of everyone on set!" "Stanley Tucci is really a Kenyan Muslim!" But anyone heading to "Burlesque" expecting it to live up to the standards of "Showgirls" is in for some serious disappointment: "Burlesque" isn't good, mind you, but it isn't the kind of bad that inspires midnight screenings and drinking games and Halloween costumes.

Aguilera's performance, for example, could be called neither Oscar-worthy nor Razzie fodder. Both the best and worst that can be said about Xtina's big-screen debut is that she's simply adequate. Cher, meanwhile, is … Cher, and she's reached a point in her career where that's all she has to be. Similarly, the musical numbers won't make Baz Luhrmann or Bill Condon lose any sleep, and they don't reach the heights of lunacy that the "Goddess" sequences of "Showgirls" or the immortal "YMCA" scene in "Can't Stop the Music" achieved. "Burlesque" instead serves up a mix of OK songs and hyperactive editing that keeps you from finding out if anyone involved can actually dance or not.

Words like "adequate" and "OK" don't belong in a discussion of the legendary duds. These are not the words you use when you watch "The Apple" or "Troll 2" or "Xanadu" or "Battlefield Earth" or even "Glitter." For a movie to enter the bad-movie pantheon, one's jaw must drop. There needs to be inappropriate Spandex or unhinged overacting or Mariah Carey's head literally exploding into fireworks. The ineptitude of a terrible film reminds us of what's good about good films. As viewers, we can take concepts like "continuity" or "restraint" or "recognizable human behavior" for granted on the screen, but an exceptionally cruddy flick makes us appreciate those qualities all over again by failing to provide them.

Gay culture has always had its own special appreciation of movie trash, and to understand why the prospect of "Burlesque" not being a good movie has engendered such excitement among a specific subset of the audience -- namely, gay men -- one must first understand two key archetypes of queer pop culture: the Diva and the Drag Queen. The diva is a strong woman who, by sheer dint of personality and determination and pluck and talent, has managed to steamroll her way into a position of worship. Show business did not have a slot for Barbra Streisand, or Cher, or Sandra Bernhard, but these women refused to tone down their otherness, and they kept at it until they could burrow out their own slot.

The drag queen parodies, amplifies, lovingly ridicules and generally lampoons the diva and the excessive qualities that helped to make her the beloved figure she has become. In queer culture, the drag queen plays the jester who speaks truth to power. She is a symbol of strength for oppressed gay men, both in eras when gay men had no public voice, and even now to say boldly the things that many in the gay community might think but never say aloud. And when the drag queen parodies the diva, it's a combination of satire and adoration.

Gay culture tends to embrace movies that star a diva -- but it especially embraces movies in which a diva embarrasses herself. Think of Diana Ross in "Mahogany," Barbra Streisand in "A Star Is Born," or Faye Dunaway in "Mommie Dearest." (That last one technically counts as a three-fer, since Dunaway is playing fellow diva Joan Crawford.) Those whom we would worship, we also enjoy watching fail: Part of that pleasure comes from schadenfreude, but it's also the thrill of watching a diva at her diva-est. When no one's putting on the brakes, they do what they do bigger and louder and crazier than ever, and it's riveting to watch, even when that bigness and loudness takes them over the precipice.

Women and gay men both know the feeling of being made to feel less-than by heterosexual men; women have had to fight their way out of the kitchen, and gays have had similar battles not only for their very existence but also to exist as three-dimensional human beings and not walking punchlines (and punching bags). The diva's triumph is also a triumph for her gay acolytes; a diva disaster takes her off her throne, for just a moment, and allows her audience to embrace her as a flawed human being.

And so came the news of "Burlesque," sitting there like a plump target, with two divas potentially being set up to fall. But the film's very premise already feels five or so years too late to the burlesque-revival party, and the fact that it was being written and directed by Steve Antin didn't engender much positive expectation either. Antin -- before helping his sister Robin destroy the legitimacy of nouveau-burlesque with the creation of those grotesque caricatures, the Pussycat Dolls -- previously wrote and starred in "Inside Monkey Zetterland," a film that, some 20 years later, is still one of the first movies that come to mind when I think about arch, self-satisfied and generally unbearable indie film. What "Inside Monkey Zetterland" is not, however, is a great bad movie.

That there isn't a good movie within "Burlesque" may not be such a shock. But that there isn't a resounding, delicious disaster going on may wind up being the bigger disappointment. There have been some notable "Showgirls" also-rans in the ensuing years -- "Coyote Ugly" and "Glitter" certainly have their champions -- but it may well be that the nature of camp and its appeal to gay audiences will never again be the same. There's already a cultural divide between gay men who still remember the first deadly wave of AIDS and the gay men who grew up with "The Real World" and "Will & Grace." Young gays may have accepted Lady Gaga as their personal diva and savior, but they might not look to or even need strong women the way their predecessors did. Besides, the alchemy of camp requires that artists work with complete seriousness to produce something that's unintentionally hilarious, and in this age where everything's ironic to some extent or other, it's harder and harder to find new films that aren't made with tongue at least partially in cheek.

Sadly, Cher may have missed her chance to make a diva disaster. But if the slow death of camp reflects a world where it truly "Gets Better" for gays, that's a swap that even the most die-hard "Showgirls" fanatic is probably willing to make.

Alonso Duralde is a freelance film writer and the author of "101 Must-See Movies for Gay Men." His most recent book is "Have Yourself a Movie Little Christmas."