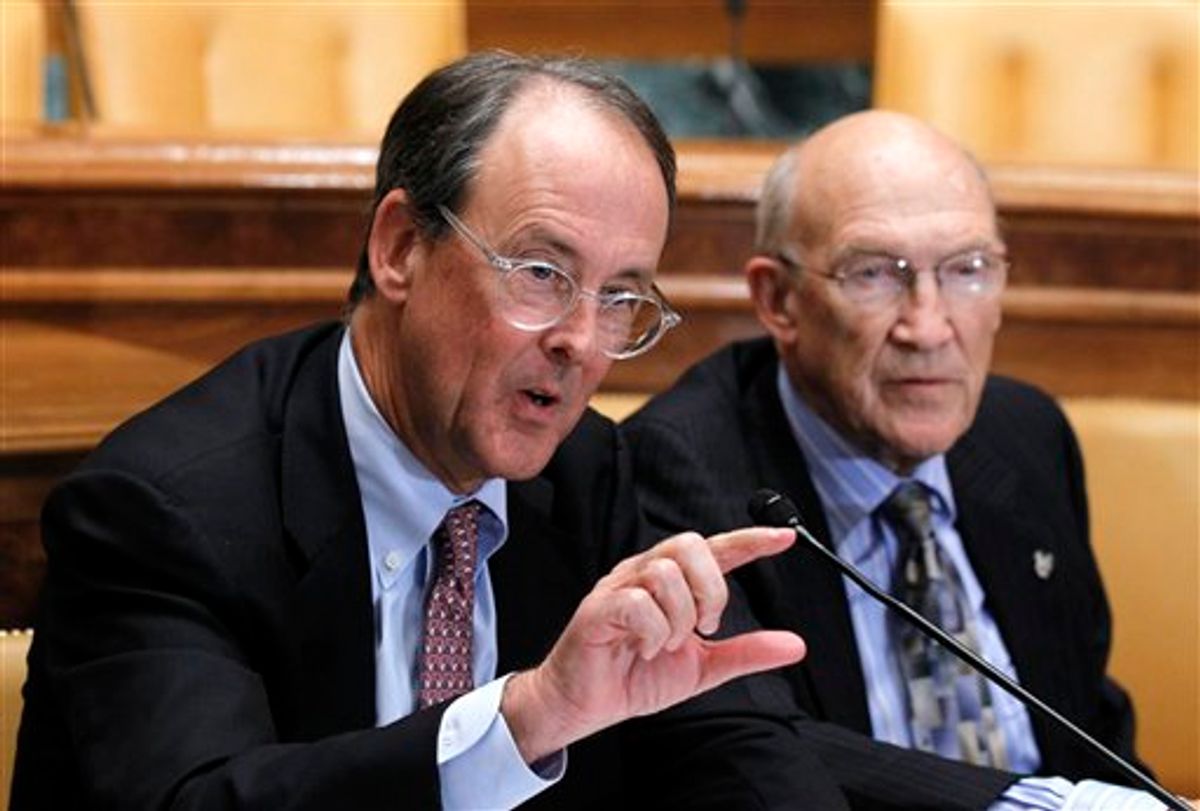 So your mortgage payment's overdue and you're lying awake at 4 a.m. wondering where the money's going to come from when the kitchen smoke alarm starts beeping. What to do? If you're like the two jokers who jumped the gun on President Obama's ballyhooed deficit reduction commission while he was visiting Asia, you'd jump out of bed, ignore the fire, back the car out of the garage and slap a "For Sale" sign on the windshield.

Never mind that the nation currently has 9.6 million unemployed, and upward of 25 million either out of work, struggling to make do with part-time jobs, or who have simply given up. The really big problem facing the nation is that Social Security may exhaust its reserves 25 years from now. Why, it's an emergency.

All of Washington's Serious People say so. Katie Couric was at her gravest interviewing Erskine Bowles and Alan Simpson on CBS Evening News. "In Focus: Debt and Deficit," they called it. Except Katie's focus wasn't so hot. The broadcast pegged this year's deficit at a record $1.5 trillion. The actual Office of Management and Budget projection is $1.29 trillion, marginally lower than the FY2001 shortfall left by the Bush administration. Hey, what's a couple hundred billion?

No matter. Over on CNN, cohosts John King and Ali Velshi assured each other that deficit reduction will be the single biggest political issue over the next two years.

"The American people are ahead of their government and their politicians on this," King said. "Because, Ali, you know this, over the past two or three years every family in America has had to make incredibly difficult choices and do things they didn't want to do. And so they look at Washington and they say why won't you do things that you don't want to do, why don't you ... do something about this and be grown-ups?"

Yes, it's perfectly obvious. The thing to do is cut government spending, reduce demand, put more people out of work. Prosperity will come roaring back.

Look, Obama asked for this. "Families across the country are tightening their belts and making tough decisions," he said, announcing the Bowles-Simpson commission during his 2010 State of the Union. "The federal government should do the same."

Because the U.S. government is just like your family. And your family can't run deficits, can it? Apart from mortgages, auto and education loans, credit cards, stuff like that. Not to mention that it's the government that actually creates and maintains the money supply. Otherwise, yeah, your family's exactly the same as the Social Security Administration, the Pentagon, the National Institutes of Health, all those. So get out and build some highways: pay as you go.

Democrats have been using this dreadfully misleading metaphor to showcase their "seriousness" to Washington media courtiers for years. Conservatives, of course, always use recessions to try to frighten people into cutting Scrooge McDuck's taxes. (Good times, too: The official rationale for the Bush tax cuts was it'd be imprudent to pay down the debt too fast.)

Remarkably, the public doesn't appear to be buying.

A week or so before Erskine and Simpson volunteered themselves to speak for a commission that hasn't yet voted, CBS News released a poll. What do Americans want the new Congress to focus upon next January? Fifty-six percent cited "economy/jobs." Second was "healthcare" at 14 percent. "Budget deficit/national debt" polled at 6 percent. If my e-mails are any indication, many of those are people who can't distinguish one from the other.

The best way to cut the deficit, of course, would be through economic growth. The current deficit's almost entirely a product of two things: the Bush tax cuts and the recession. "Anyone who bothered to sit down and look at the numbers," writes economist Dean Baker on his Beat the Press website, "would see that there was not a big deficit problem by any realistic measure until the housing bubble collapsed."

Baker warned early and often about the dangers of the housing bubble. So by the same principle that makes people who foresaw the folly of invading Iraq unreliable on foreign affairs, he's not taken as seriously as the junior varsity Cassandras who fill the airwaves and Op-Ed pages with scare talk. He also writes clearly, always suspect in an economist.

Short term, he writes "people who want lower deficits in the current slump want more people to lose their jobs." Longer term, the U.S debt problem is due to Medicare. Baker: "Per person costs are projected to rise from a bit more than twice the average of other wealthy countries to 3 or 4 times the average per person cost. If health care costs increase as projected, it will have a devastating impact on the economy."

Wow, why didn't I think of that?