LeBron James created controversy this summer when he accused sports fans of racism. We ask an expert: Was he right? 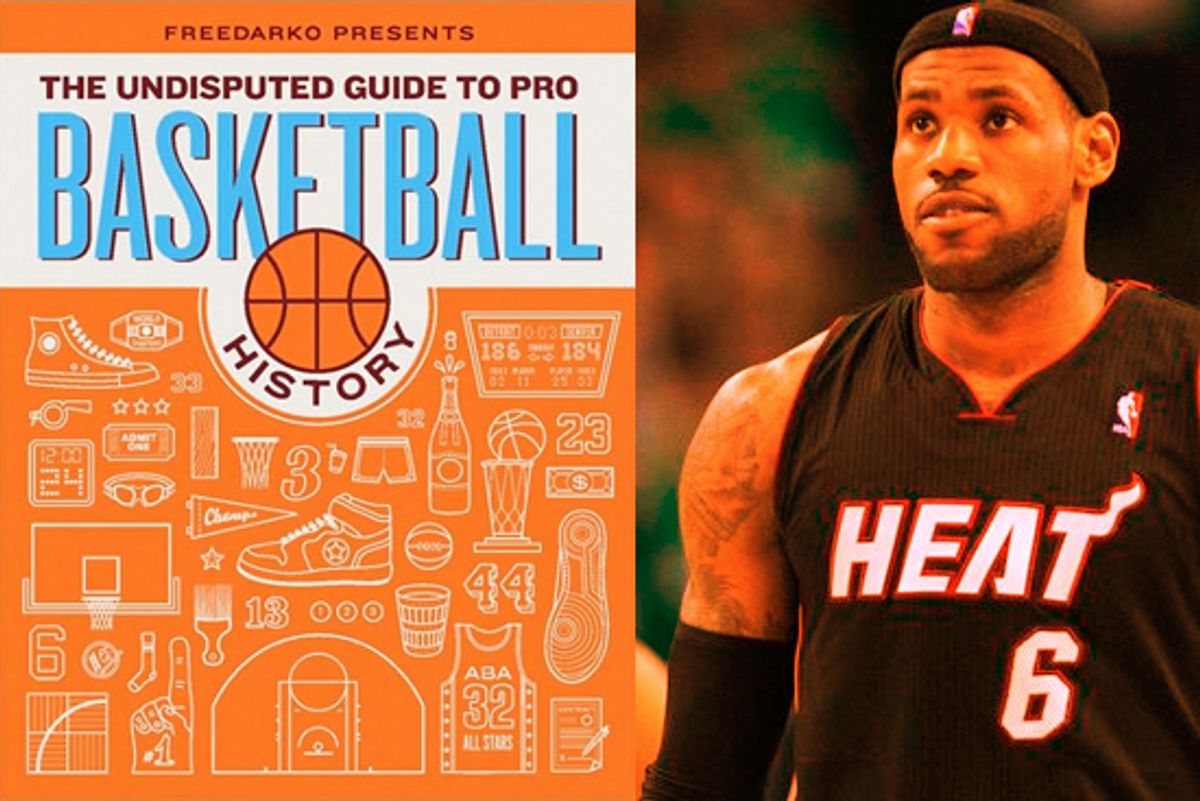 As the great David Halberstam often observed, the racial politics of professional basketball have always been rather delicate. The sport, after all, sells the talents, style and power of mostly young black men to a largely white audience — and these uncomfortable racial dynamics have a tendency to bubble to the surface in strange ways. This summer, after LeBron James left Cleveland for Miami in a showy power grab, the move unleashed a tsunami of bile. According LeBron, the backlash was at least in part caused by the "race factor," and it spawned a heated debate about the role of racism in the NBA.

For people looking for some perspective on the issue, "The Undisputed Guide to Pro Basketball History," from the people behind the FreeDarko basketball blog, is a great place to start. The book is a collectivist account of the NBA's racial, labor and cultural reverberations — with occasional jaunts into graphic novel format. "TUGTPBH" co-author Bethlehem Shoals is a primary contributor to FreeDarko, a site with a reputation for thought-provoking takes on the basketball world. Salon spoke to Shoals over the phone, about the LeBron controversy and the changing nature of race in the NBA.

Well, obviously, there's a dimension to that. You can say, "Oh, it's just a coincidence that everyone is mad at him and he's black." But, I'm sorry, the country hasn't earned the luxury to say, "You know, on this one, race really isn't an issue." The history of sports in America is shot through with all sorts of issues of race and perceptions of "the other." And the NBA is the worst in that respect because it's so closely associated with not just people of different skin color, but also the entire urban culture, for lack of a better term.

It depends on how much stock you want to put in the very universal — with a few notable exceptions — NBA player efforts to get Obama elected. No one seemed to have a huge problem with that. But then again, that was the building story of the century. And if you're not going to let black athletes speak in favor of a black president, that's when it starts to get a little dicey.

As for players having opinions on things that aren't as obvious... I don't know. When do athletes ever speak out about anything? Big-name athletes still don't speak on anything unless it's a humanitarian cause. Humanitarian causes are fine, when you're not really blaming anyone or asking anyone to change. When, recently, have you heard of an athlete supporting a senatorial candidate? Has an athlete ever made a "It gets better" video?

When LeBron said that "race was a factor" in the backlash against him, he got quickly ridiculed for playing the "race card." The media narrative seemed to insinuate that he was using an unfair tactic — or a cowardly tactic — just by bringing up that race played a role in the hatred.

LeBron simply said that "race was a factor," and some people said, "Oh, you're being a wuss!" or "Why didn't you say this before?" I think it's weird that he could be accused of being opportunistic by bringing it up — bringing it up because people were mad about it. It was like he was either going too far and not far enough.

When people talk about playing the race card, they mean that someone is halfheartedly, noncommittally using race because it'll help them. But that's the thing: If it was going to help him so much, then why didn't he bring it up earlier? So you're getting on the guy because he's not mad enough about race in this situation? These are the same people who are saying that race isn't a factor!

That reminds me of how politics is often assessed in a horse-race fashion, where people don't discuss the veracity of a politician's claims so much as they discuss the PR impact — and whether or not they will help or hurt the politician. It just seemed odd that the sportswriters were discussing the impact in terms of "Oh, this isn't going to help LeBron. This is going to make it worse," as opposed to going, "Well... he's right."

Sports media is by and large cynical, conservative and at best apolitical. I think it's interesting because with politics, it's regarded as a very bad thing that brands, P.R. or spin have taken total precedence over what's true and what's not. Obviously, the disconnect between policy and voting is the worst thing to happen in the history of people voting on issues.

But the thing about sports is, you have two sides to being an athlete. You've got what you do on the field, and then you have the brand side of it. Because part of being an athlete is getting money and a big part of getting money is your brand. Athletes have a voice and a platform, and some people think it gives them an obligation to take advantage it, and to stand up for just causes — or at least not to fall victim to utter B.S. That's another issue altogether. I'm not sure why we look to athletes on these issues, because... they're athletes!

I actually think it's good if our most supposedly vacuous celebrities feel the need to have social consciousness and speak out on issues. It's sad that we're looking to them to do so, but I think it's reflective of a healthy society if they're doing it.

Yeah, I agree with you. Certainly, when you look in our book at the civil rights era, many athletes had a personal investment in that. There's something very inspiring about that time. That's what was so great about the summer of Obama in the NBA. We know these guys aren't idiots, and it's good to see them engaged politically. And yes, it's indicative of a healthy society. Now, do we want to say that an athlete who didn't support Obama publicly is somehow lacking as a human being? That's when I start to have problems with it.

We talked about the racial resentment that may have played a role in the LeBron summer. I'm wondering, can NBA commissioner David Stern actually benefit from this possible resentment in almost a Lee Atwater fashion? Can that anger against LeBron James be harnessed to gather support for these billionaire owners?

Look, you're certainly right about that, but I don't think Stern needs to do anything to capitalize. Somehow these fans think they have more in common with the owners than they do with the players. You can always sell fans on the idea that players are spoiled millionaires. That's why what [Cleveland Cavaliers owner] Dan Gilbert did was so terrible for the owners. Because it showed that he was even more of a spoiled millionaire than anyone claimed LeBron was.

Any thoughts on the controversial Ken Jeong–Derrick Rose commercial in which Jeong acts like a crazed, decadent rap star?

It weirds me out the way the commercial is somehow both offensive to black people, and at the same time, it's making fun of Asians who "act black." Because, that's what [Jeong's] whole stupid shtick is.